Posted on May 1, 2020 at 8:49 am GMTRaffi Boyadjian, XM Investment Research Desk 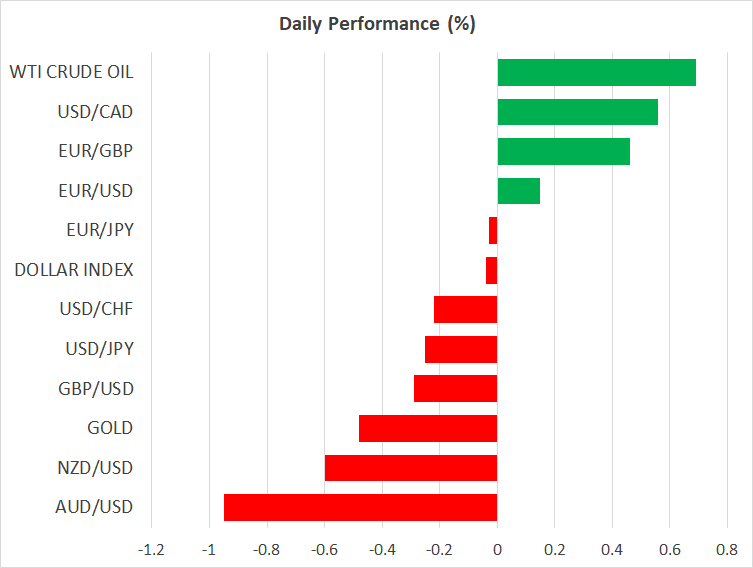 Trump’s tough on China rhetoric is back, spooks markets

US President Donald Trump raised the prospect of fresh tariffs on China on Thursday as his administration seeks ways to retaliate against China’s handling of the COVID-19 outbreak. The virus has cost more than 60,000 American lives, crippled the economy and put millions out of work at a time when the President is meant to be preparing for his re-election campaign.

Many think Trump’s finger pointing at China is a way of deflecting criticism away from his own management of the crisis, but it is looking increasingly likely that some retaliation is on the way. The President has hinted at tariffs, though other forms of sanctions are possible too.

Media reports suggest that action is not imminent, but his remarks have nevertheless upset the fragile calm in the markets. Risk appetite had been steadily recovering from the depths ploughed in March as central banks and governments globally injected trillions of dollars of liquidity into the markets. But a lot of the optimism had been built around misguided euphoria such as the notion that everything will go back to normal once the lockdowns are lifted or pinning hopes on early drug trials like remdesivir.

Eurozone growth crashes; ECB does nothing

With a lot of uncertainty still in the air, there were plenty of other reminders yesterday that the road ahead remains a very bumpy one. The Eurozone economy shrank by a bigger-than-expected 3.8% on a quarterly basis in the three months to March, in what is likely to be just the start of a very steep downturn. Yet, the European Central Bank held back from scaling up its asset purchases at its meeting on Thursday, making only a few adjustments to its special lending programs.

But although the ECB’s tweaks are more significant than they seem on the surface as they in effect amount to rate cuts for commercial banks borrowing from it, investors were not impressed and shares in Europe sagged by more than 2%.

Most European markets are closed today for the Labour Day holiday but in London, which is trading, the FTSE 100 slumped by another 2% at the open, pressured by poor earnings.

US stock futures were also deep in the red as upbeat results from Microsoft and Facebook were offset by worrying reports from Apple and Amazon. Although both reported revenue above estimates, Apple did not provide any guidance, underlining the clouded outlook, while Amazon took a $4 billion charge for increased costs arising from dealing with the pandemic.

Oil giants are in focus today as Exxon Mobile and Chevron are due to announce their results before the US market open.

The risk-off moves were evident in FX markets too, with the antipodean currencies feeling the negative pressure the most. The Australian dollar was last trading 1% lower after hitting resistance in the $0.6550 region and the New Zealand dollar tumbled below the $0.61 level.

The US dollar, which has been on the retreat on the back of the improved risk tone over the past week, saw its sell-off pick up pace yesterday, but only because the ECB’s decision put the spotlight on the Fed’s ultra-loose monetary policy. Dismal consumption and jobless claims numbers out of the United States reinforced the view that the Federal Reserve is bound to announce additional stimulus measures in the coming months.

The dollar index slipped to 2-week lows as the euro jumped sharply above the $1.09 level. The pound benefited from the euro’s advances, crossing above the $1.25 threshold. The greenback was steadier today as investors eyed the ISM manufacturing PMI for April due later today.

Despite the risk aversion, however, gold slipped, falling for a second day, which perhaps is a reflection of the slight improvement in the near-term outlook as major economies around the world start to reopen, at least partially. 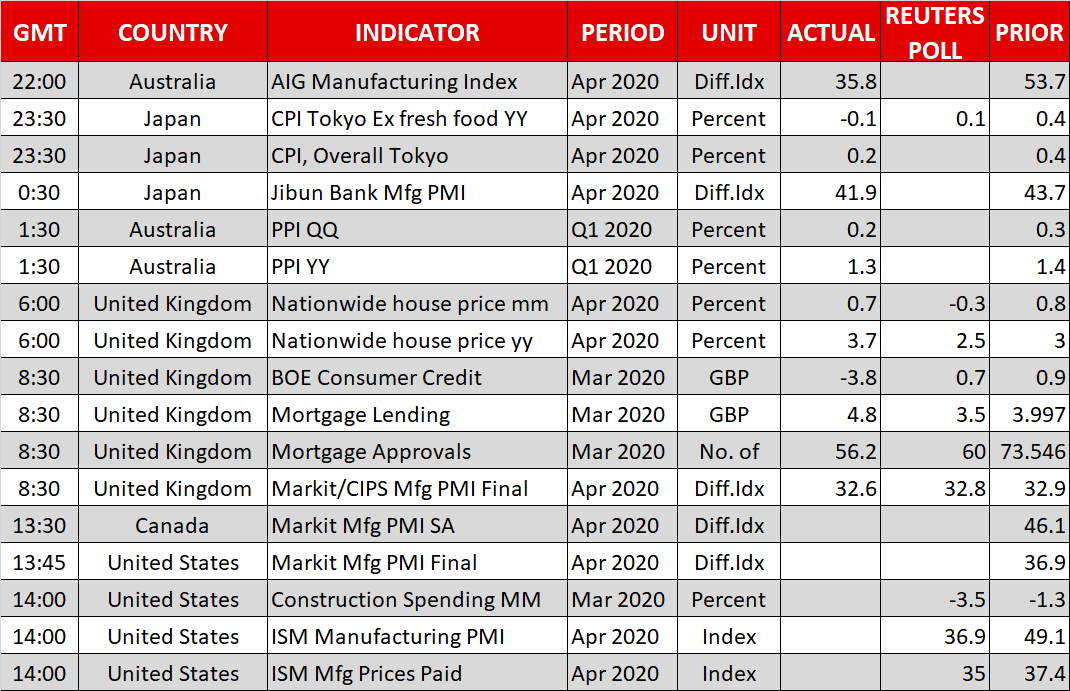