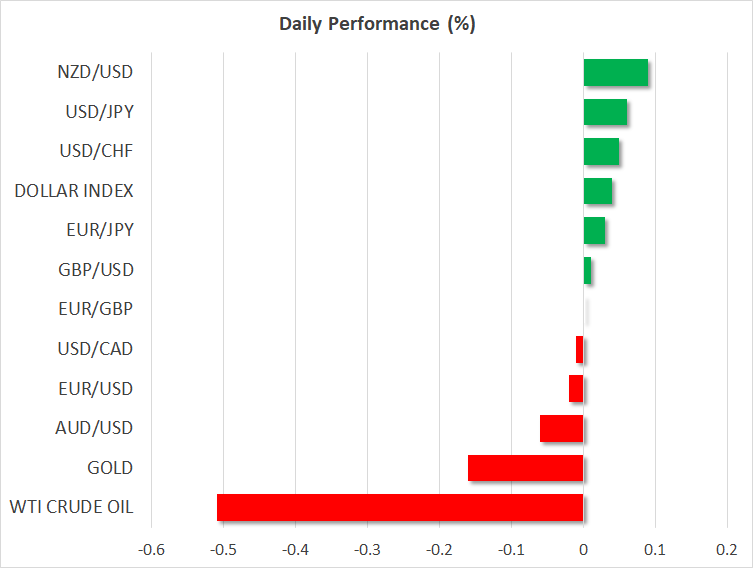 Fed Chairman Jay Powell met with President Donald Trump on Monday to discuss the economy. The latter then tweeted out that the conversation centered around how high US interest rates are relative to other advanced economies, the prospect of negative interest rates, and how the dollar’s strength is hurting American manufacturers.

The dollar fell on the news, as Trump is apparently lobbying Powell to either lower rates further or intervene in the FX market to weaken the reserve currency. Admittedly, this is nothing new – Trump has attacked the Fed’s ‘tight’ policy on numerous occasions – which likely explains why the greenback recovered most of its losses before long, and why the market-derived pricing for Fed cuts in early 2020 is practically unchanged.

In other words, everyone knows the President wants lower rates and a weaker dollar, especially entering an election year, but investors are effectively saying that Powell won’t indulge him unless the economy takes a turn for the worse.

While we may see a further setback in the dollar tomorrow if the Fed minutes confirm that policymakers intend to let the economy ‘run hot’, the currency’s broader outlook remains positive, especially against the euro. The US economy is still much stronger than the Eurozone, where growth is anemic and interest rates are at rock bottom already. For this to change, either the Fed needs to start cutting rates with a vengeance, or Germany has to announce a big fiscal stimulus package, neither of which is likely anytime soon.

The mood in the markets soured yesterday, following reports that Beijing is “pessimistic” about reaching a trade deal due to Trump’s reluctance to roll back existing tariffs. The story added that China’s strategy now is to continue talking, but wait things out, as the impeachment inquiry and the upcoming US election raise questions about Trump’s status.

US stocks retreated while safe havens such as the yen and gold climbed. Yet, stock investors took heart by the Trump-Powell meeting, with all three of the major indices managing to reclaim their losses and close at new all-time highs, as the mounting political pressure on the Fed to loosen policy bodes well for equities.

Looking ahead, a ‘phase one’ deal in December seems increasingly questionable, as China is clearly not in any hurry to make compromises, while Trump is unlikely to make an unconditional surrender either and risk losing political capital ahead of an election year. The point is that a resolution may be elusive, and while stocks may not care much since another escalation would likely see the Fed resume its easing cycle, the same cannot be said for the FX market – where the likes of the yen may be priming for a comeback.

Overnight, the minutes of the latest RBA meeting showed that policymakers debated a rate cut but decided against it, amid concerns that repeated cuts may have a detrimental effect on consumer confidence by putting the health of the economy in the spotlight. The aussie fell, but quickly recovered its losses to trade unchanged.

Outside of Canadian manufacturing sales, the economic calendar is void of any major releases today.