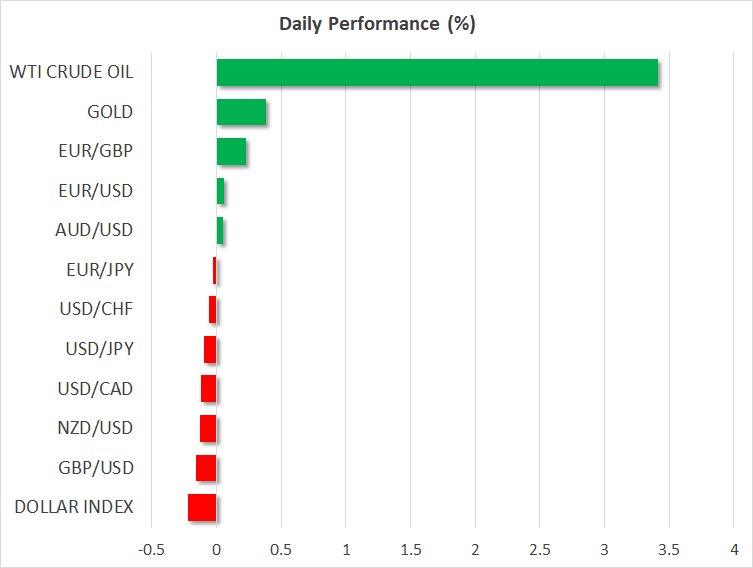 President Trump stepped up his fierce criticism of China as he continued to blame the country for failing to stop the spread of the coronavirus. Speaking to Fox Business Network on Thursday, Trump cast doubt on future trade links with China, saying the recently signed phase one deal “doesn’t feel the same to me”, before adding “right now I don’t want to speak to him” about President Xi.

The Trump administration is reportedly looking at ways on how it can punish China such as forcing Chinese companies listed on US stock exchanges to follow US accounting rules. But Trump went as far as saying “We could cut off the whole relationship”, cementing fears that China will become the main battleground in the 2020 presidential race.

However, while the shockwaves from Trump’s intensifying anti-China rhetoric were clearly being felt in the markets, they were not producing tremors on the scale seen during the 2018-19 trade war. This may suggest investors are not convinced Trump will follow up his words with action as doing so would damage the US economy at a time when businesses are still counting the cost of the virus impact.

In a reminder about the worsening economic situation, weekly jobless claims rose by another 2.98 million yesterday, slightly down on the week but above expectations of 2.5 million, indicating large-scale layoffs remain worryingly high across the United States. Yesterday’s figure takes the tally of US job losses due to the virus crisis to a staggering 36 million.

The souring of US-China relations has been lifting the safe-haven gold, which is fast approaching April’s 7-year high. Fed Chair Powell’s bleak view of the US economy has also been supportive of the precious metal this week. But another reason driving up gold in recent days is the prospect of more monetary and fiscal stimulus.

Stocks have not missed out on the boost from stimulus expectations either, as once again the abundance of liquidity flooding the markets has broken the traditionally negative relationship between equities and gold.

But are traders yet again gearing up for disappointment? While further action from the Fed is guaranteed should the US economy suffer a relapse, the possibility of additional fiscal stimulus is looking less certain.

Party politics is holding up Congress from approving another massive virus relief package after Republicans rejected the $3 trillion plan put forward by the Democrats. But markets seem to think it’s only a matter of time before the two sides reach a deal, especially as the President appears to be in favour of more stimulus.

Investors also remain optimistic that a recovery will come in the second half of the year even as the US appears to be most at risk of a second wave of infections, having eased lockdown restrictions too early. But for now, the optimists seem to be outweighing the gloom spreaders and Wall Street posted a sharp turnaround soon after the open on Thursday to close more than 1% higher.

This helped Asia to close mostly higher and shares in Europe have opened in positive territory.

Dollar eases but up on the week

In the FX sphere, the mood was less sanguine, as the week’s beaten-down currencies like the pound and the Australian and New Zealand dollars maintained a downward bias and were steady at best. There was some support for the aussie following a better-than-expected rise in Chinese industrial output in April, while higher oil prices aided the Canadian dollar’s rebound towards the C$1.40 mark.

Oil prices have rallied this week amid signs the supply glut may be easing. But retail sales numbers out of the US later today may encourage investors against betting on a strong demand revival in the current climate.

The heightened risks to the outlook pushed up the safe-havens yen and Swiss franc on Friday, though the US dollar was slightly softer against a basket of currencies after touching 3-week highs yesterday. The euro, meanwhile, was mixed, as it slid to 5-year lows versus the franc on expectations that the European Central Bank will pump more stimulus in the coming months. 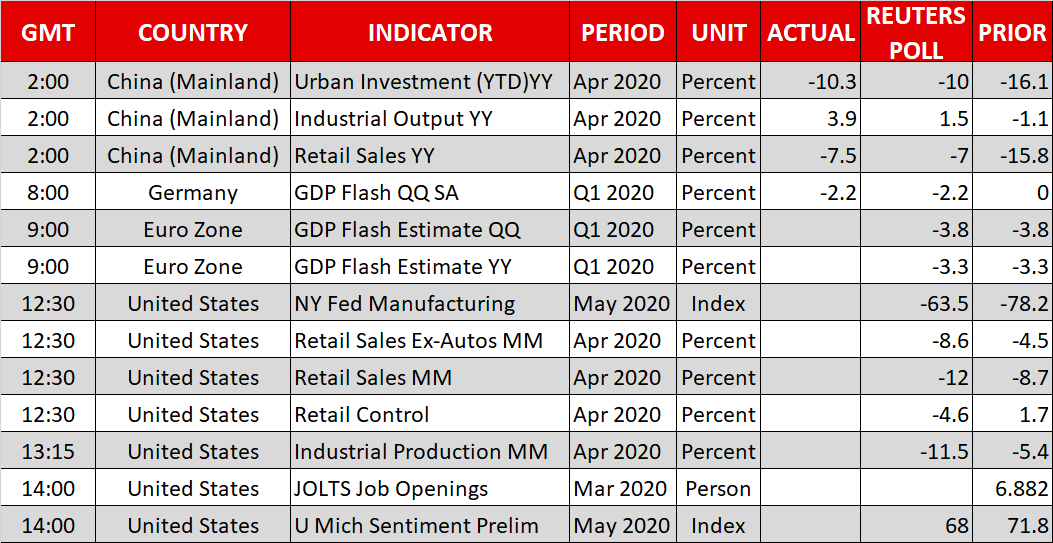