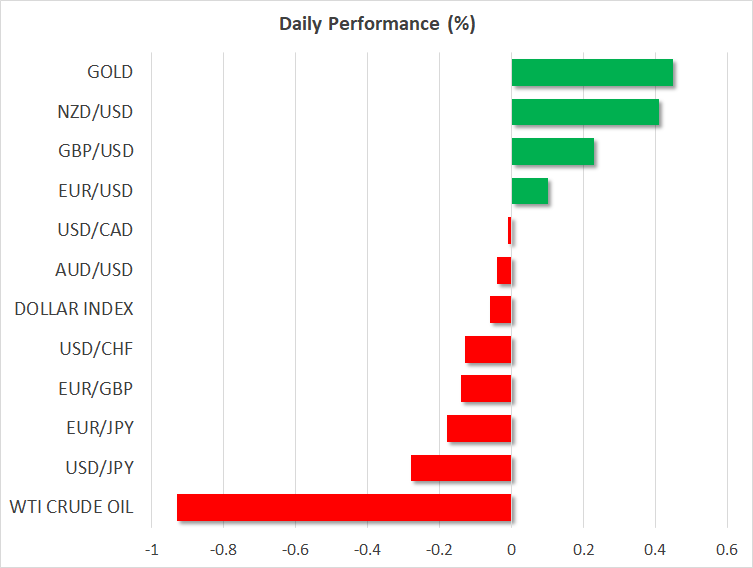 US stock markets levitated to new records on Friday, undeterred by some remarks from President Trump that he hasn’t decided yet whether he is willing to roll back tariffs on China to get the ‘phase one’ deal over the finish line. Yet, the mood soured over the weekend, after his top trade advisor and notorious China hawk – Peter Navarro – said there’s no agreement to roll back any existing tariffs as part of the phase one deal, contradicting earlier statements by Beijing.

Escalating tensions in Hong Kong are weighing on risk sentiment as well, after police shot a protester on Monday, amplifying concerns that there’s no end in sight to the political chaos – which is now in its sixth month. For markets, the fear is that continued violence could see the US Congress choke off the supply of dollars to Hong Kong and thus to mainland China, complicating the trade talks. The Hang Seng index is 2.6% lower, dragging most of Asia down with it. Even futures on Wall Street are pointing to a negative open, while the haven Japanese yen is outperforming in the FX arena.

Where does all this leave markets? While a ‘phase one’ deal appeared all but certain a few days ago, both sides are now trying to squeeze out some eleventh-hour concessions, raising the possibility of another setback. Not to mention that even if a partial deal is signed, there are no guarantees of any progress after that, as ‘phase two’ is where the thorniest issues will be negotiated. Overall, a phase one deal is now the base-case scenario for investors, which implies that there’s probably more room for declines on any disappointment, than there is upside in case that deal is signed soon.

The US dollar shined on Friday, without any fresh catalysts. Some remarks by the Fed’s Bostic that the central bank should wait and see on future cuts likely helped, by solidifying the view that policymakers want to hit ‘pause’.

In Canada, the loonie tumbled after the employment data for October fell short of expectations, fueling bets that the Bank of Canada could slash rates soon as ‘insurance’ against trade tensions. Markets now assign a one-in-four chance for a cut in December, which becomes a coin toss for the January meeting.

Yet, these numbers may be underestimating the actual likelihood of a cut. Governor Poloz made it clear recently that the bar for such a move is pretty low, adding that policymakers already debated it. The point is that the risks surrounding the loonie remain tilted to the downside. Any more negative surprises could see markets price in a much greater likelihood for a cut, whereas solid numbers may be unable to dispel such expectations.

UK GDP data due, but focus remains on election polls

In Britain, GDP data for Q3 are due today, but the focus remains on opinion polls ahead of the December 12 election. Signs that either of the major parties can get a majority could benefit the pound, whereas any indications smaller parties are gaining ground may bring it under pressure, as that would raise the odds for a hung parliament.

The Spanish election ended with no clear winner, though PM Sanchez’s socialists remained the biggest party. There was no reaction in the euro. 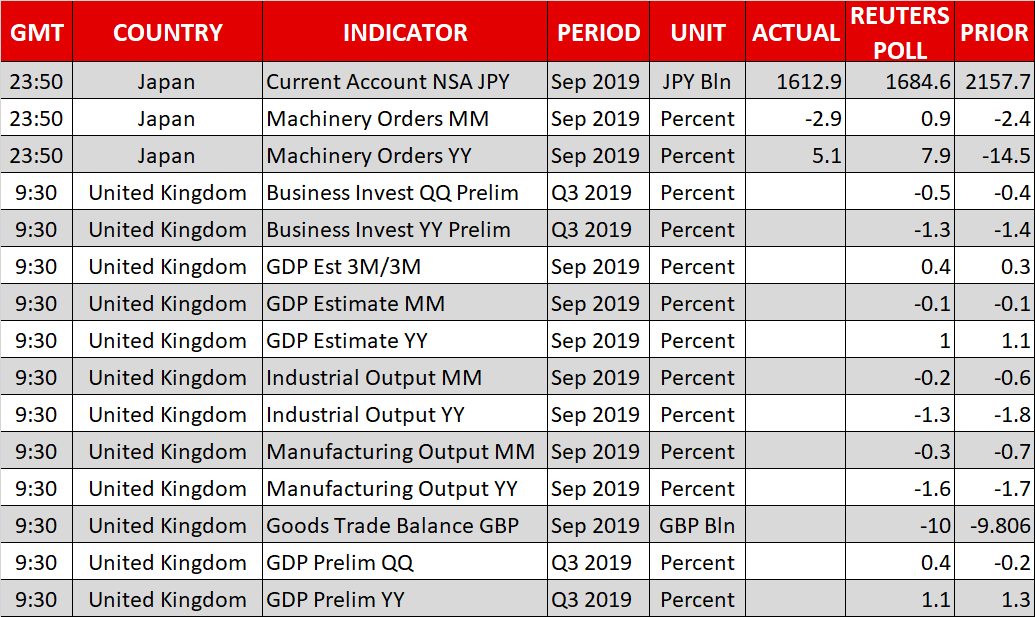