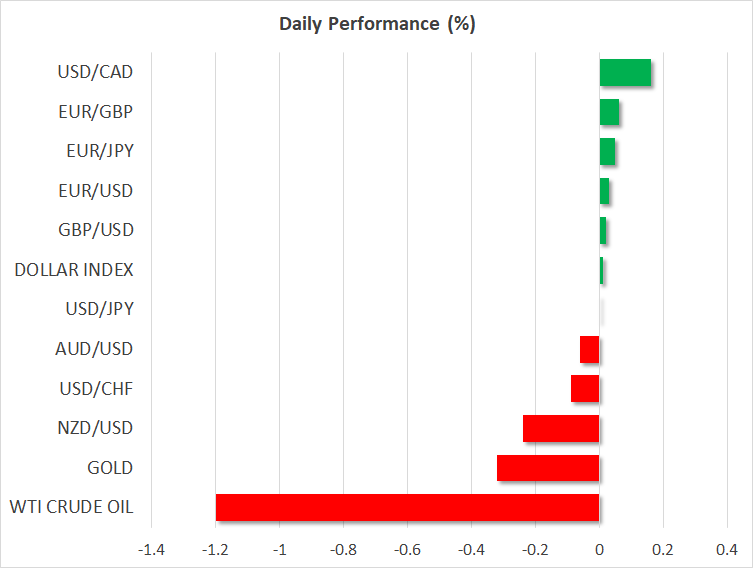 American equity markets sailed into uncharted waters yesterday, with all the major indices – the S&P 500 (+0.77%), Dow Jones (+0.67%), and Nasdaq Composite (+0.74%) – closing at new record highs. In a classic case of ‘bad news is good news for stocks’, the catalyst behind these gains was a batch of disappointing US data, which reinforced expectations that the Fed will act with force in reducing rates over the coming months. Lower interest rates typically boost riskier assets like stocks.

The ADP employment print for June clocked in at a mere 102k, lower than the expected 140k, igniting worries that the official payrolls number that is due tomorrow may also miss forecasts. Likewise, the ISM non-manufacturing PMI declined by more than projected to hit a two-year low, signaling that the malaise in manufacturing may have started to infect services as well.

US markets will remain closed today in celebration of Independence Day. For traders, that means liquidity will be thinner than usual, so any headline could generate a disproportionately large market impact.

In the FX market, the positive equities’ mood translated into a boost for the commodity currencies. The aussie, loonie, and kiwi outperformed their major peers, without much in the way of news out of those economies.

The loonie in fact touched a new high for 2019 against the dollar, supported by an uptick in oil prices and the overarching theme of policy divergence between the Fed and the Bank of Canada (BoC). Canadian data have been strong lately, in contrast to other developed economies, which puts the Bank of Canada in the odd situation of being almost the only major central bank not about to cut rates – perhaps with the exception of the Bank of England. That could make the loonie much more attractive from a relative rates viewpoint, implying that the currency may still have a lot of room to appreciate from here.

The American president made headlines again on Wednesday, after he tweeted: “China and Europe playing big currency manipulation game”, adding that the US should “match” what they are doing. Admittedly, this is not anything new from Trump – he has made many similar comments on currency manipulation despite the US Treasury not labeling those economies as manipulators.

What stands out though is the comment that the US should “match”, which is effectively a call for a weaker dollar, likely aimed at the Fed. The greenback fell slightly on the news but recovered almost immediately to close the session nearly flat against a basket of six major currencies.