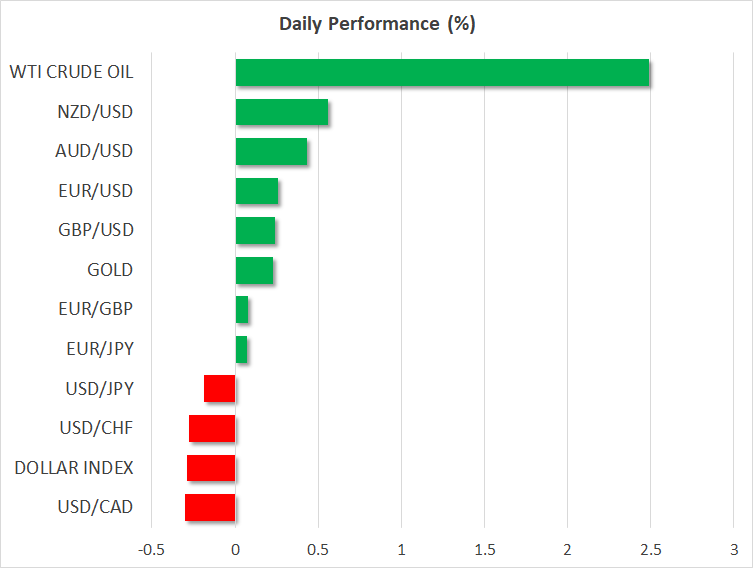 Rapid progress in the race for a COVID-19 vaccine more than offset the deepening gloom of the present virus reality as the latest wave shows no sign of waning. Expectations that last week’s breakthrough announcement by Pfizer will soon be followed by similar headlines from other pharmaceutical giants – leading to the availability of multiple vaccines by year-end/early 2021 – alleviated the pain for investors who are bracing for another global slump in economic output in Q4.

But even in the short-term, there are pockets of positivity, with today’s encouraging signs coming from the signing of a free-trade pact by 10 Asian-Pacific nations and China’s recovery going from strength to strength. Industrial output and retail spending in China accelerated further in October, easing fears that world economic performance in the fourth quarter will be a complete washout.

There was further encouraging news out of Japan where the Q3 rebound in GDP was stronger than anticipated.

All this fuelled a rally in Asian stocks on Monday, lifting major indices in the region by more than 1%, with Japan’s Nikkei 225 closing at its highest in 29 years. European shares also opened sharply higher, while e-mini futures for the Dow Jones Industrial Average and S&P 500 point to a record-setting session on Wall Street today, following on from Friday’s new all-time close by the S&P 500.

Forget the virus numbers, more Fed stimulus could be on the way

However, the vaccine-led euphoria on Wall Street may be masking the fast-deteriorating virus picture domestically, as America is in the midst of a third wave. More states have announced tighter restrictions over the past week as daily coronavirus infections continue to grow at a record pace, overwhelming health services. Up until now, talk of a double-dip recession had mostly centred on Europe, but the odds that the US could also suffer a steep contraction in Q4 GDP are rising by the day.

However, markets do not appear to be responding much to that threat and one reason for that is it may just push the Federal Reserve to pump yet more stimulus into the economy, especially as Congress is unlikely to approve a huge fiscal package anytime soon.

The take from Chair Powell’s remarks last week was that further stimulus will be needed despite the possibility of a vaccine being available soon. If policymakers judge that the near-term risks have risen substantially enough, they could announce new measures at their next meeting in December. Hence, upcoming Fed speeches between now and then will be watched closely for more clues, with Vice Chair Clarida being in the spotlight today (19:00 GMT).

Another reason why investors are not so jittery is the easing uncertainty over the US election. Although President Trump has yet to concede defeat and his legal team continue to fight in the courts, the risk that they would be able to successfully overturn Biden’s victory is seen as very remote.

The optimistic tone kept the US dollar on the backfoot on Monday, with the greenback sliding to a one-week low against a basket of currencies. The yen slipped too as investors piled into emerging market and commodity-linked currencies on the back of the brighter trade outlook.

Among the majors, the New Zealand dollar was the biggest winner, climbing back towards last week’s 19-month high, while the aussie and loonie also posted solid gains.

In Europe, the euro and pound gave back earlier advances amid reports Germany is planning to tighten some restrictions even further, which would add another blow to the region’s economy. Brexit nerves also weighed slightly, pulling sterling back below $1.32 as traders pondered whether the end-of week deadline for the Brexit negotiations was a ‘hard’ one.

Talks on a post-Brexit trade deal will resume in Brussels this week as the two sides struggle to narrow the gap in the key disputed areas of fisheries and a level playing field. Officials have signalled that a deal needs to be reached in the next 7-10 days so that it can be ratified in time before the UK’s transition period ends on December 31, though some market participants see the deadline for an agreement being pushed out further, possibly to early December.