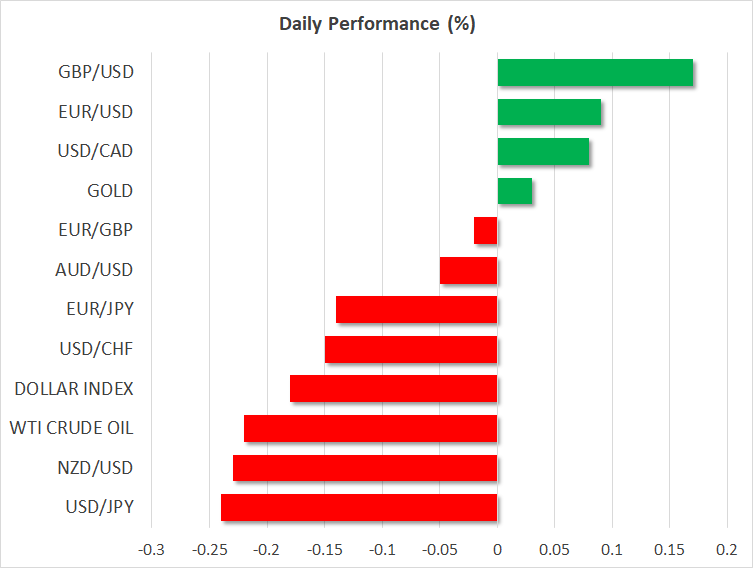 The fight against the pandemic took another major step forward on Monday after Moderna became the latest pharmaceutical company to announce a vaccine for COVID-19. Moderna’s vaccine, which has an even higher efficacy rate than Pfizer/BioNTech’s, further bolstered expectations that an end to the ravaging pandemic is nigh.

Shares on Wall Street surged on the back of the vaccine optimism, pushing the S&P 500 and Dow Jones Industrial Average into record territory. With other vaccine developers expected to announce their results in the coming weeks, a post-pandemic reality has now started to materialize and this is driving a rotation away from growth sectors such as tech and into value shares, which are predominantly ‘old economy’ stocks.

That explains why the Dow Jones has been outperforming its Wall Street peers lately, while the Nasdaq has been lagging as stay-at-home companies that were boosted from the lockdowns are not as attractive when a full reopening looms on the horizon. Yesterday’s gains have placed the Dow just 50 points away from the psychologically important 30,000 mark – a remarkable achievement given the unprecedented crisis the world is facing right now.

The growth-to-value rotation is even more evident in Europe where traditional stocks have been enjoying a strong revival since Pfizer’s vaccine breakthrough, with London’s FTSE 100 and the Paris CAC 40 shining bright.

European shares opened marginally lower on Tuesday and US stock futures were also pointing to a small pullback.

Mainly risk-on, but some caution

The risk-on mood reverberated through the currency markets as well, boosting the commodity dollars as growth-sensitive commodities like oil and copper soared. The aussie, kiwi and loonie were slightly softer today after reclaiming key levels.

It was a somewhat more cautious tale in bond markets as government bond yields failed to jump to anywhere near last week’s highs, potentially signalling increasing pessimism about the near-term situation. New infections continue to escalate in Europe and the United States, raising doubts about whether or not virus restrictions will be substantially lifted in time for Christmas.

In America, more and more states are imposing tougher curbs to try and contain the virus and in the absence of fresh fiscal stimulus, the Fed is worried. Fed chief Jerome Powell is due to speak later today (18:00 GMT) and may comment on the economy, though his deputy, Richard Clarida, sounded relatively more upbeat in remarks yesterday than his colleagues have done recently.

Still, growing expectations that the Fed will have to beef up its asset purchases soon may be what’s curtailing Treasury yields from shooting higher on the vaccine headlines and could also be weighing on dollar/yen.

The pair has slumped to a one-week low, pulling the dollar index down too. The euro continued to edge higher despite Hungary and Poland yesterday vetoing the European Union’s next seven-year budget as well as the virus relief package over a dispute about how funds will be distributed. The market reaction suggests investors expect the spat to be resolved at the upcoming EU summit, while traders are also upbeat about the prospect of a Brexit deal.

The pound was up 0.3% following a report in ‘The Sun’ newspaper that the UK’s chief negotiator, David Frost, has told Boris Johnson to expect a deal on a post-Brexit trade accord to be reached “early next week”.

Oil prices crept higher on Tuesday, but the latest bout of vaccine euphoria could only offer a mild boost in comparison to last week’s rally. This could be an indication that the vaccine story is mostly priced in now and further gains have become preconditioned on the demand picture for the winter months improving substantially.

Investors are also waiting to see what OPEC and its allies will decide about output cuts in a meeting today. The OPEC+ alliance of major producers is expected to delay the planned easing of supply restrictions due to take effect in January by at least three months.

WTI and Brent crude were last trading up by about 0.5%.