Risk aversion made a comeback on Thursday as a flurry of alarming headlines led investors to cut their exposure to riskier assets, in fear that the avalanche of stimulus globally may not be quite enough to keep the economy on a recovery track. Infections in the US continued to accelerate, topping 60k for the first time in a single day, with the death rate on the rise too.

Meanwhile, in the latest jab at Beijing, the White House announced that the federal US government will no longer conduct business with American companies that use equipment from five Chinese technology firms, including Huawei. This, while two US aircraft carriers conduct military exercises in the South China Sea, further infuriating Beijing.

In the political realm, Joe Biden – who will challenge Donald Trump in November’s presidential election – turned up the populist rhetoric against Wall Street, saying that “ending the era of shareholder capitalism is overdue”. The former vice president also outlined his spending ambitions if elected, which amount to $700bn that will be paid by “reversing some of Trump’s tax cuts for corporations”, according to his website.

That’s the real concern for investors, even though raising taxes would require a fierce battle in the Senate, which the Democrats don’t control. Still, Biden is leading Trump by 9 percentage points in nationwide polling averages, and is also beating him in every battleground state, so markets might begin to focus on what a Biden presidency means for corporate taxes and by extension, for stock prices trading at rich multiples.

Equities turn red, but Nasdaq doesn’t get the memo

The result was a classic case of risk aversion, with the S&P 500 closing roughly 0.6% lower in a volatile session and futures pointing to a similarly lower open today. In the FX arena, the US dollar cruised higher as investors piled back into the reserve currency’s safety, mostly to the detriment of commodity currencies and the euro.

The outlier was the tech-heavy Nasdaq (+0.5%), which defied the downbeat mood to close at new records, powered by the likes of Amazon (+3.3%). The Nasdaq has outperformed throughout this crisis thanks to its concentration of giant tech names with healthy balance sheets, effectively turning it into a ‘defensive play’ as far as equities go.

In commodity markets, oil prices slipped and continue to move down today, as worries about the global recovery intensify amid a resurgence in cases across the globe, from Australia to Japan to India to America. Meanwhile, the recovery in the dollar clipped gold’s wings, perhaps in combination with some profit-taking after such a rally.

In the bigger picture, for all the volatility and all the negative headlines lately, most charts have really gone nowhere over the past month. The S&P 500 has been trapped in a range since early June, as have most FX pairs that include the dollar, which has transformed into a safe haven. 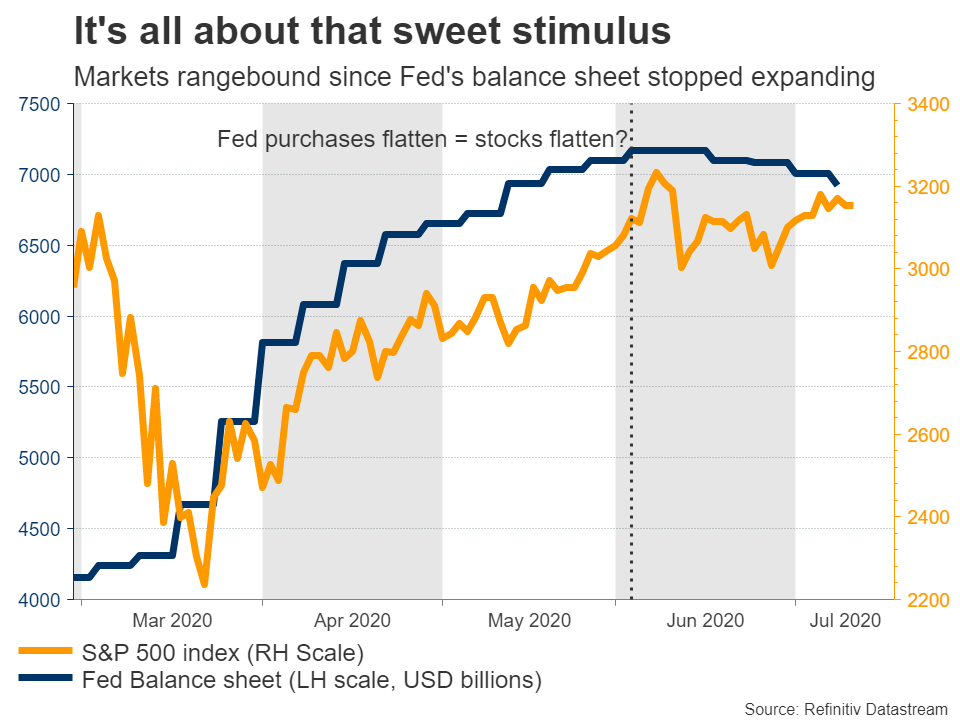 Coincidentally or not, that’s almost exactly when the Fed’s balance sheet stopped expanding, which is a sign that liquidity – not fundamental news – is the real driver of the market mood. That said, the upcoming earnings season could still go a long way in deciding whether markets will revisit the more ‘pessimistic’ bound of their recent ranges.

As for today, the spotlight will be on Canada’s employment data for June, and the daily virus numbers out of the US.