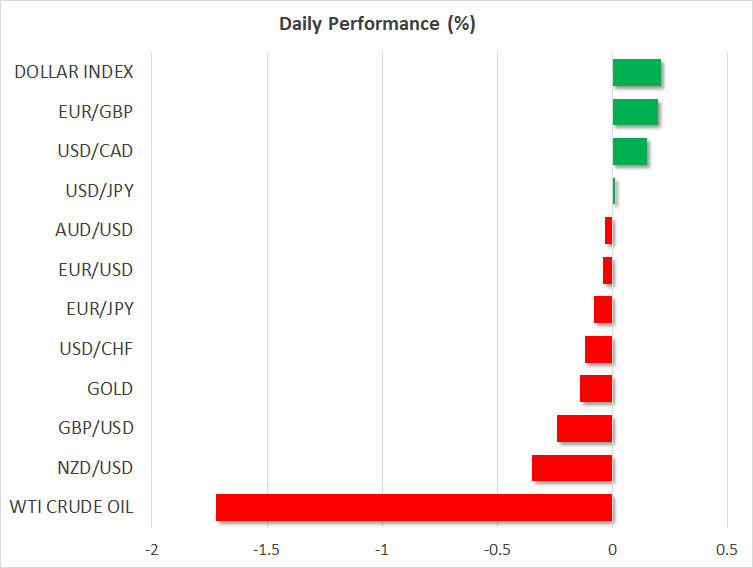 Shares on Wall Street slipped late into the session on Monday as a persistent surge in new coronavirus cases across the United States unnerved investors. The tech-heavy Nasdaq Composite had been trading in record territory before reversing sharply lower to end the day down 2.1%. The S&P 500 also slid into the red, but the Dow Jones managed to stay in positive territory.

The jitters came after California – the largest economy in the US – announced that it will reintroduce some lockdown measures, closing down indoor businesses such as bars, restaurants, hair salons and gyms. Meanwhile, Florida’s daily virus count on Monday held uncomfortably near Sunday’s single-day record.

The worsening virus situation in the US has been unfolding for some time but up until investors thought that significant parts of the economy would be able to remain open, there was little concern about its effects on the recovery. Now that more and more states are tightening restrictions with few signs of the contagion slowing, risk assets could become more sensitive to the virus data going forward.

Nevertheless, US stock futures were marginally higher today and losses in Asia and Europe were contained as traders gear up for the Q2 earnings season. Banks will be dominating the earnings announcements on Tuesday, led by JP Morgan, Citigroup and Wells Fargo. Delta Air Lines will also be in focus as the airline industry has been brought to its knees by the pandemic.

In the broader markets, risk appetite was also in short supply, though the mood was somewhat calmer. The US dollar edged higher against a basket of currencies after two days of declines, but gold continued to hover around the $1800/oz level, showing little reaction to fresh tensions between the US and China.

Washington and Beijing were headed for another stand-off after the US Secretary of State Mike Pompeo said China’s claims to offshore resources in parts of the South China Sea were “completely unlawful”. The Trump administration risks aggravating China further if it goes ahead and cancels an audit deal between the two countries that it is considering doing amid a push for tighter scrutiny for Chinese companies that are listed in the US.

However, as the diplomatic flare-up shows no sign of abating, the two sides are still insisting that the ‘phase one’ trade deal remains intact, and that probably explains the muted market response to the recent frictions.

In the immediate term, there are more pressing matters that are pre-occupying traders, as apart from the earnings season just getting underway, policy decisions by the Bank of Japan and the European Central Bank, due on Wednesday and Thursday respectively, are being awaited.

Second quarter GDP data from China on Thursday is also on the markets’ radar as the recovery in the world’s second largest economy continues to gain traction. China reported an unexpected rise in exports on a yearly basis in June earlier today, while imports grew for the first time since December, indicating strengthening global and domestic demand.

The data could only provide limited support to the Australian dollar, which pulled back from yesterday’s highs as Wall Street faltered.

The loonie was under more pressure, however, as oil prices dipped on expectations that OPEC and its allies will ease the steep production cuts they had agreed following the virus crisis when they meet tomorrow.

In European currencies, the euro was softer after yesterday’s rally, but the pound extended its decline. Sterling fell towards the $1.25 level after the UK economy rebounded far more slowly than anticipated in May, raising concerns about the recovery. 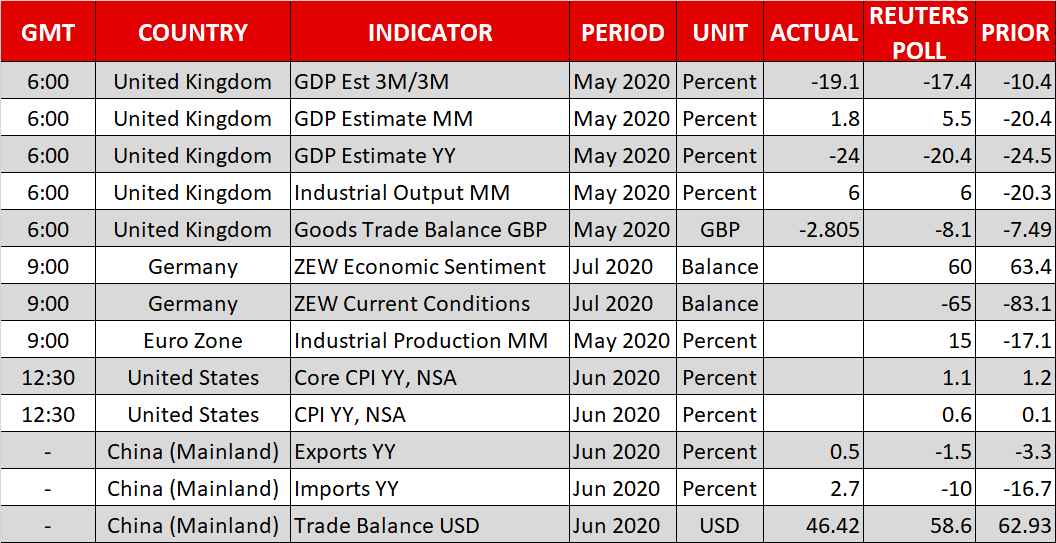