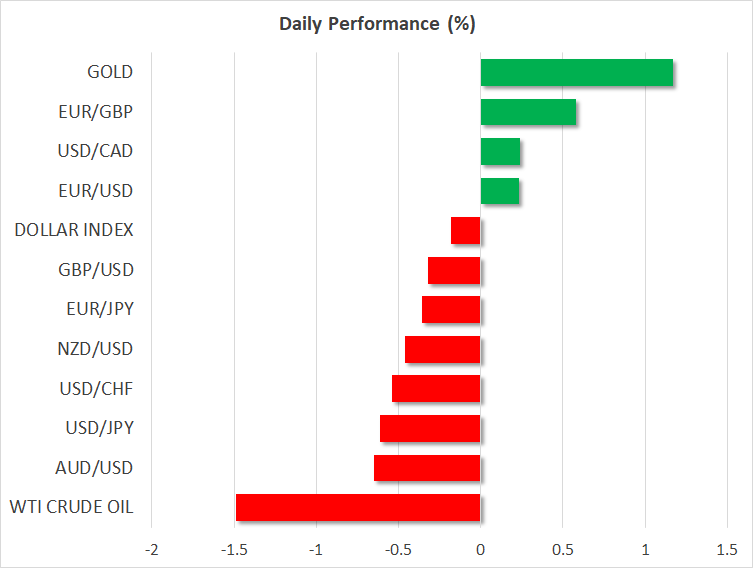 The fallout from the latest escalation in the US-China trade dispute continued to be felt across financial markets on Monday as investors sold off stocks and emerging market currencies and diverted funds into safety assets such as the yen, Swiss franc and gold.

Last week’s abrupt decision by US President Trump to impose 10% tariffs on the remaining $300 billion worth of Chinese imports took markets by surprise and erased all hopes that a trade deal between the world’s two largest economies can be reached in the foreseeable future.

Asian stocks sank further on Monday with Japan’s Nikkei 225 index closing at a 7-week low, while futures for US and European indices were pointing to losses of about 1%.

The heightened trade uncertainty and the increasing adverse ramifications of Trump’s protectionist policies on the global economy drove gold to a new 6-year high of $1459.47 per ounce earlier today. The yellow metal’s rally also helped pull cryptocurrencies higher, with Bitcoin surging by more than 6% to burst past $11,700.

The yen was the best performer in currency markets as investors’ preferred safe haven rose sharply against all its major peers and hit 7-month highs against the dollar, firming to below the 106 level. The Swiss franc was in demand too, climbing to a one month high of 0.9780 to the dollar.

The Chinese yuan plunged on Monday, slumping to levels not seen since the depths of the financial crisis in 2008 as the politically sensitive 7 per dollar level finally gave way. The yuan opened above the 7 per dollar level in onshore trading before weakening as much as 7.0351 after the People’s Bank of China set the lowest mid-point since December 2018. The move possibly signalled the PBOC was willing to tolerate a weaker currency amid rising strains on the Chinese economy from the intensifying trade war.

The yuan’s decline was even sharper in offshore trading, hitting as low as 7.1087 per dollar, and pulling other emerging market currencies down with it. Another casualty was the Australian dollar, which tumbled to a 7-month low of $0.6746, extending a more than two-week slide. Other commodity-linked currencies also slid, as the price of key commodities such as copper plunged.

However, while Chinese authorities may see little reason in maintaining aggressive forex intervention to defend the yuan following Trump’s latest “irrational, irresponsible act” as described by China’s ambassador to the United Nations, the move risks provoking further punitive measures by the United States.

All this suggests neither side is about to cave in to the other’s demands anytime soon, suggesting the trade conflict is likely to get even worse before easing again. In the meantime, the impact on world trade and growth can only become more damaging, which can only imply central banks will need to pump yet more stimulus to shore up stuttering economies.

US, Japanese and European sovereign bonds have already rallied strongly in the past few days, driving yields sharply lower, as investors are now expecting even more rate reductions by the Federal Reserve than they did before last week’s hawkish rate cut. Friday’s lacklustre jobs report did little to alter those expectations. The latest ISM non-manufacturing PMI due later today might also fail to have much of an impact

The shifting odds of more Fed easing is accentuating the dollar’s decline versus the yen, while helping struggling currencies such as the euro and the pound stabilize from their month-long slide. 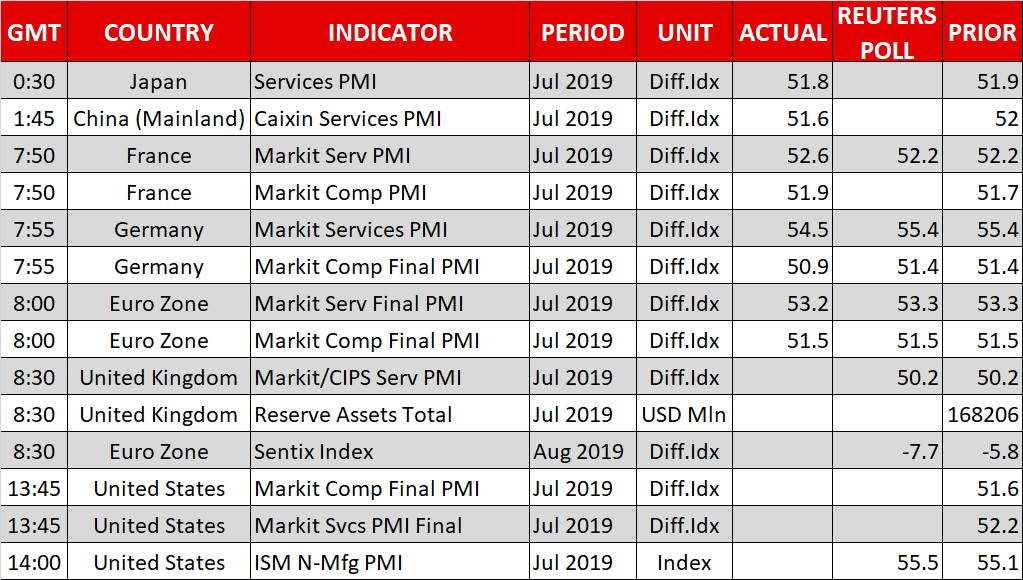