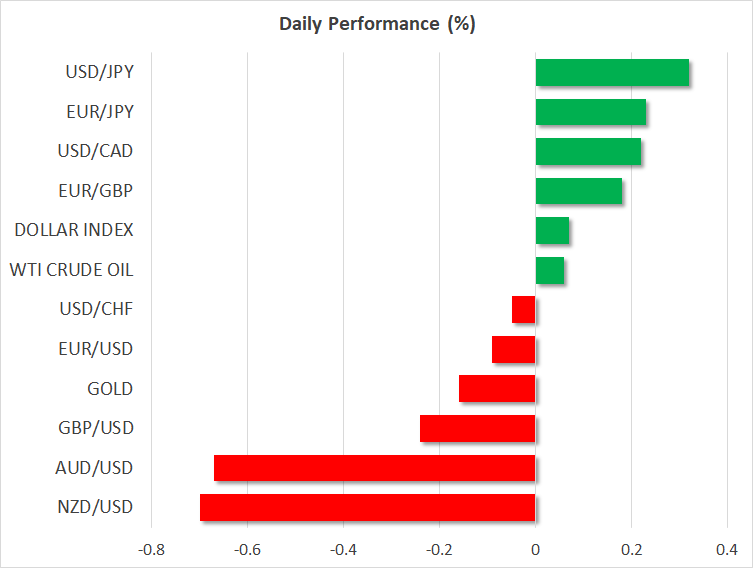 Is yen losing its safe-haven status?

The Japanese yen came under attack on all fronts on Wednesday, sending the safe-haven currency plunging against all its peers, even against the beleaguered euro and pound. The biggest beneficiary of the yen sell-off was the US dollar, which scaled a near 10-month peak, reaching as high as 111.84 yen earlier today. The greenback, which has already been on a roll lately, gained additional impetus from the yen’s slide, ascending to 33-month highs against a basket of currencies and cementing its status as the world’s favourite currency.

There was no single trigger for the yen’s sudden unpopularity, with reasons ranging from positioning ahead of the end of the Japanese fiscal year to short covering. But the strongest explanation is a widespread selling by Japanese asset managers amid growing fears about the health of Japan’s economy.

A blitz of data released this week suggested Japan could already be in a technical recession, with the outlook having deteriorated rapidly following the outbreak of the coronavirus. Japan has the second highest number of confirmed cases globally and its proximity and export dependence to China makes it vulnerable to the economic fallout from the virus.

The most unusual thing about the yen’s current decline is that dollar/yen has been diverging from gold and US Treasury yields, which are normally closely correlated. This raises question marks about whether the yen is losing some of its shine as the world’s preferred safe-haven currency and is yet another distortion in the markets that traders have to keep an eye on.

Drop in number of new cases in China treated with caution

Stocks were mixed on Thursday as traders greeted the big fall in the number of new confirmed virus cases in China with extreme caution after authorities once again revised their counting methodology, raising suspicion about the reliability of the figures. According to official numbers from China, there were only 394 new cases yesterday, compared with 1,749 on Tuesday.

With no reason provided for the large drop, safe havens – apart from the yen – remained well supported today. Gold prices slipped marginally, having yesterday climbed to a near 7-year high of $1612.62 an ounce, while the yield on 10-year Treasury notes fell to 1.55%.

Still, stocks in China were boosted and resumed their rally after the country’s central bank cut its benchmark one-year loan prime rate by 10 basis points to 4.05%, and in Japan, the weaker yen lifted the Nikkei 225 index, offsetting recession worries. US equity futures were in the red today, suggesting Wall Street is unlikely to be able to repeat yesterday’s record run.

Investor concerns about the impact from the coronavirus outbreak was more evident in the risk-sensitive aussie and kiwi dollars amid growing risks to the Australian and New Zealand economies from a prolonged epidemic. Market odds that the RBA and RBNZ will be forced to cut rates again in the coming months have been slowly edging higher and an unexpected increase in Australia’s unemployment rate in January only added to those expectations.

The Australian dollar slid 0.7% to fresh 11-year lows after the data and the New Zealand dollar was down a similar amount.

There was little reaction to the Fed’s minutes of the January meeting yesterday and the euro is also not anticipated to be spurred much by the minutes of the ECB’s last policy meeting when it’s released at 12:30 GMT.  Instead, the focus will now shift to tomorrow’s flash PMI releases for February for the first glimpse into how major economies coped when the virus outbreak started intensifying.