The world’s leading graphics card maker will report its second-quarter earnings after Wall Street’s closing bell on Wednesday. The company’s shares have been on fire this year, rising by an incredible 108%. While Nvidia is a great company with a bright future, at current levels its stock looks expensive by most metrics, so anything short of stellar results and guidance might leave it vulnerable to a meaningful correction. Still, any pullback may simply present a better entry point for many investors. Expanding horizons

Nvidia reached a new milestone last month, officially surpassing Intel to become the most valuable US semiconductor firm by market capitalization. Not only has demand for gaming products risen with the pandemic, but the graphics chip giant has expanded its horizons beyond the gaming industry, which has traditionally been its bread and butter.

It is now increasing its footprint in areas like cloud computing, data centers, and artificial intelligence. As such, investors view the company as being perfectly positioned to capitalize on the tech revolution that the pandemic has accelerated so dramatically. This optimism is reflected in the phenomenal price action, with Nvidia being the second-best performing company on the S&P 500 this year.

For the quarter ending in June, the company is expected to report earnings per share (EPS) of $1.97, which would represent an increase of almost 59% from the same quarter last year. Similarly, revenue is projected to have jumped by nearly 42% over the same period, to $3.6 billion. 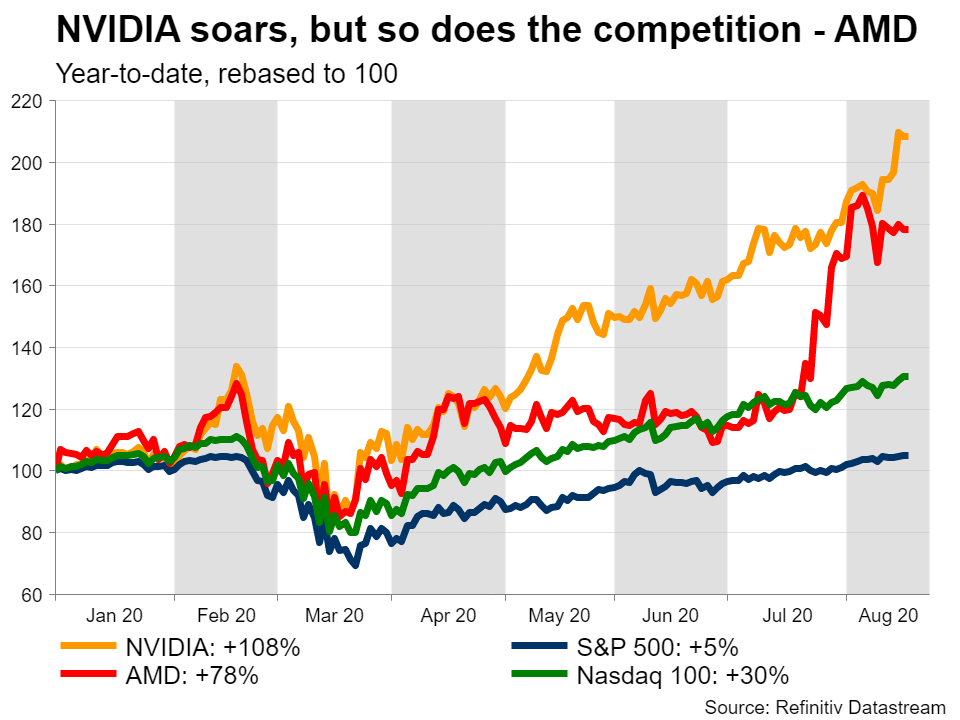 Breaking this down, what’s striking is that revenue from data centers is projected to have outpaced that from the firm’s gaming business, highlighting the company’s drastic transformation.

The initial reaction in the stock’s price will likely depend on whether the actual numbers are stronger or weaker than these forecasts. It’s safe to say that Wall Street is expecting a beat, judging by the parabolic price action lately, so anything short of stellar numbers may be met with disappointment.

But whether that initial reaction is sustained or not, will depend on the guidance by the company’s management in the subsequent conference call with analysts.

Great company, but a pricey valuation

No doubt, Nvidia is a solid company. Less than two years ago, many obituaries were written about how the firm’s rapid growth was about to end because the cryptocurrency boom was dying out. And yet, the stock’s price has almost quadrupled since, because of this diversification. That said, being a great company doesn’t mean your stock price is realistic at any given moment – markets often run ahead of fundamentals. Let’s look at some valuation metrics. 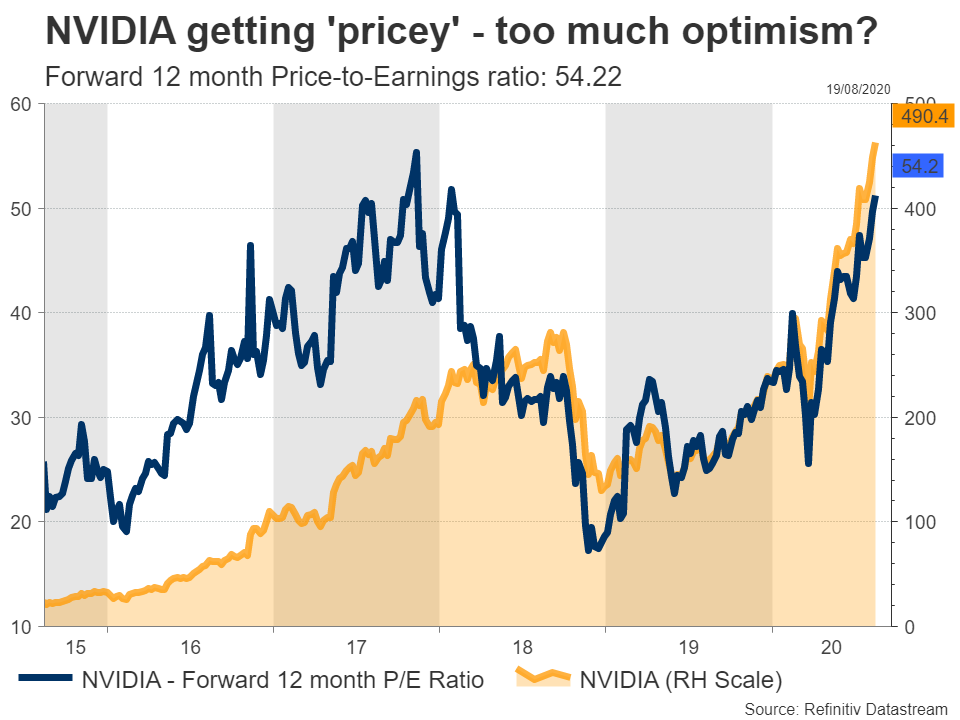 The most common one is the price-to-earnings (PE) ratio. This number denotes the dollar amount someone would need to invest to receive back one dollar in annual earnings, so the higher it is, the more expensive a stock is considered. Nvidia’s 12-month forward PE ratio currently stands at 54.2, which is roughly in line with the heights of the ‘dot com’ bubble. The forward price-to-sales ratio is much worse, standing at a monstrous 18.8, which is multiple times its peak from the ‘dot com’ era.

These could be indications of an overvalued stock, or a sign that investors expect exponential growth going forward, or a combination of the two. The bottom line is that the stock is trading at ‘pricey’ valuations, leaving it vulnerable to sharp corrections if reality doesn’t match the market’s rosy expectations.

To be clear though, even in case of a pullback, any drop may be seen as a renewed buying opportunity by many investors. The firm has proven beyond a doubt that it can innovate its way out of seemingly tough spots, and the wind seems to be blowing squarely in its favor right now. Even if the market has gotten a little ahead of itself in pricing in good news, long term investors may still find value.

Taking a technical look at Nvidia’s stock, a potential pullback might meet immediate support near 468.0, where a downside break may open the door for a test of 432.0.

On the upside, a move above the all-time high of 499.8 may stall initially around 533.0, which is the 261.8% Fibonacci extension of the February-March downleg.