Canadian jobs data for June will accompany the US nonfarm payrolls on Friday at 12:30 GMT. The consensus is for a softer employment print, but the data will not alter the central bank’s guidance for a super-sized rate hike this month, even if global recession fears are taking a toll. Instead, the facts suggest the commodity-dependent economy could weather a potential economic downturn better than its major G7 fellows, and Thursday’s trade data due at 12:30 GMT could affirm that. Hence, only a significant miss in expectations could extend the loonie’s sell-off.A tight labor market and rising inflation expectations

Employment growth has likely narrowed in Canada again, with analysts estimating a milder addition of 23.5k when compared to May’s reading of 39.8k, which was more than twice April’s low of 15.5k. On the other hand, the unemployment rate and the participation rate are expected to stay steady at 5.1% and 63.5% respectively, flagging that the tight pool of labor supply is mainly responsible for the moderate increase in new job positions. 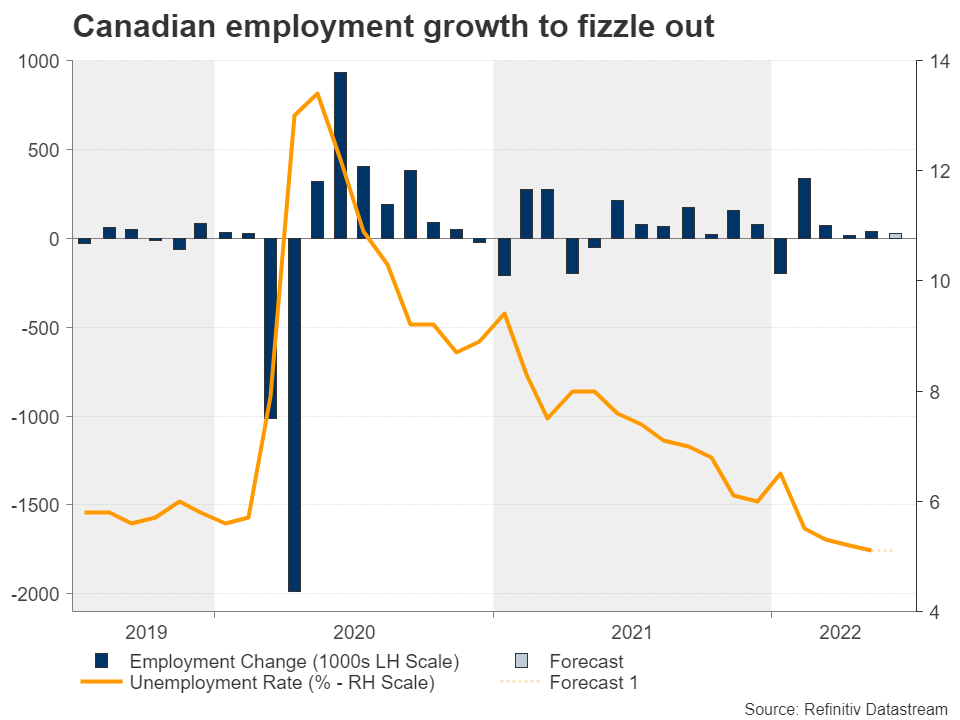 In support of the above argument, the latest Business outlook survey outlined that most of Canadian businesses are still facing labor shortages, while it takes them longer than previously anticipated to resolve bottlenecks in supply chains. Specifically, evidence from restaurants revealed owners are capping reservations and half of the tables remain empty because of the lack of staff. Businesses also predict inflation remaining elevated above 5.0% a year from now and wage growth accelerating by an average of 5.8% this year, which would still fall short of inflation if consumer prices were to decelerate moderately below the current peak of 7.7% y/y in the remainder of the year.

A similar story was told by the survey of consumer expectations, which showed short-term inflation expectations ramping up from 5.1% to 6.8%, while projections for a wage growth increase were more conservative at 2.0%. The latter could be a sign that consumers may become more careful with spending as household debt to disposable income magnified to 186% lately, whereas the household debt to GDP eased to 107.9%, though it remained in the uncomfortable zone and way higher than other western economies.

Overall demand conditions are still robust, and the savings ratio is the highest since 1996, which makes a triple rate hike by the Bank of Canada this month a done deal as cooling inflation is a top priority for now. Of course, escalating concerns for a global economic recession are weighing on the outlook of commodity-dependent economies such as Canada. Though, with the war in the Ukraine and the pandemic jitters showing no abate, supply constraints may keep feeding energy prices, consequently supporting Canada’s public finances as the Fitch rating agency argues, or at least position Canada at a better place than other advanced economies.

At this point it is also worthy to mention that trade data are expected to show a greater surplus of C$2.4billion in May compared to C$1.5billion in the preceding month. On the other hand, the US trade balance could improve but remain negative at $84.9bln. 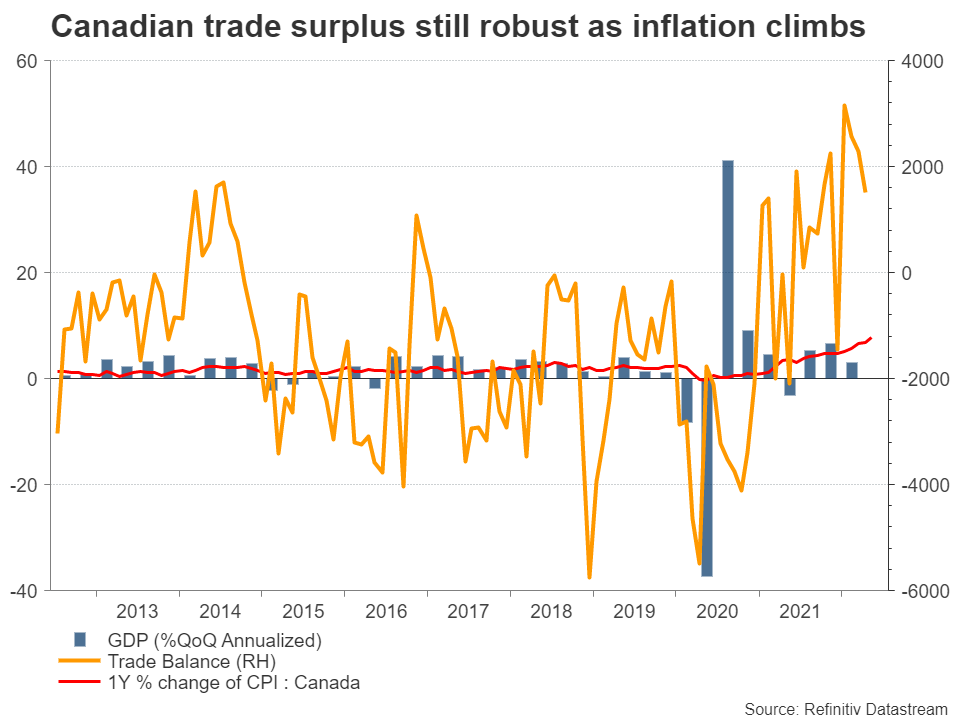 The question that arises now is how the loonie will react to this week’s data. Sinking oil prices triggered by recession concerns boosted dollar/loonie by 1.5% on Tuesday to a new 1½ -year high of 1.3082.

Despite the exciting rally, the pair could not close above the 200-weekly simple moving average at 1.3026 but the US dollar may have another opportunity to breach that ceiling and gear up to the next resistance of 1.3175 as jobs numbers could do little to alter the BoC’s rate guidance this month.

Also, investors expect the Canadian monetary tightening policy to cool down earlier than the one in the US in the near term, delivering a softer 50 bps rate increase in September compared to the Fed’s 75 bps rate hike scenario. In the meantime, only a significant data miss could extend the loonie’s sell-off. Otherwise, if employment growth extends its upside trajectory from March lows, dollar/loonie may seek initial support around the 1.2960 handle before meeting the 20-day SMA at 1.2915.

Note that US nonfarm payrolls are coming out on the same day and time and some disruption in the Canadian data impact may occur.