The Federal Reserve clearly reiterated during its policy meeting last week that significant progress in the labor market is a necessary condition to settle the landscape for when it will start to taper its QE bond purchases. Hence, all the attention will be on the Nonfarm payrolls report due this Friday at 12:30 GMT, with investors expecting July’s employment release to outperform June’s numbers. Any bigger surprises could boost the US dollar.Jobs' growth could strengthen in July

According to forecasts, the US economy added 880k new jobs in early July, slightly more than the 850k addition registered in June, pressing the unemployment rate to a fresh low of 5.7% after the slight rebound to 5.9% previously.

As regards average hourly earnings, they have probably kept a steady speed of 0.3% on a monthly basis but flourished from 3.6% to 3.9% year-on-year partially because of the so-called base effects, and perhaps because of the wage incentives provided by employers such as McDonalds and Papa John’s which aim to solve the scarcity of qualified workers and draw back those who are still living under the generous unemployment benefits. 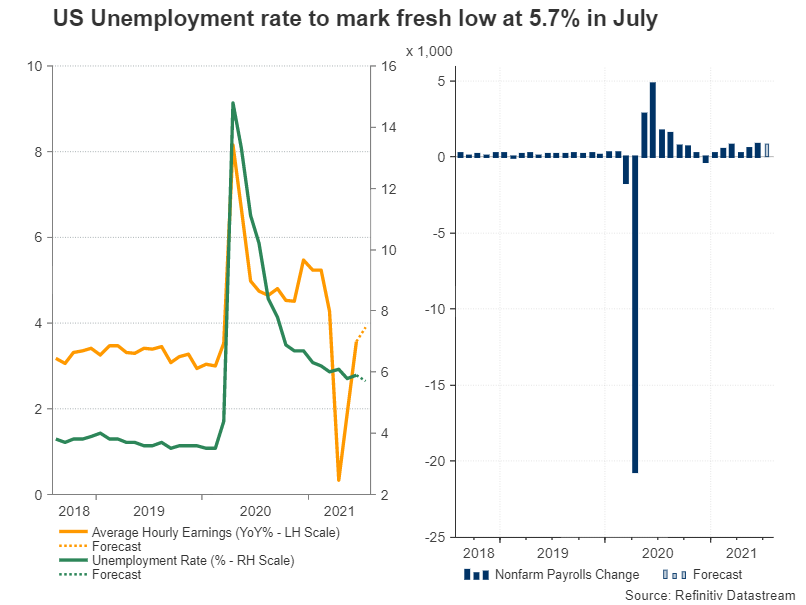 The questions that arise at this point are how long will the Fed delay its bond tapering and when will the desired significant progress in the labor market take place? Despite the increased hiring, there are still some 7 million jobs to recover completely, of which a significant portion has retired and is not expected to return.

Thankfully, Fed speakers came to shed some light on the matter this week. Particularly, Fed Governor Lael Brainard, who is considered a leading candidate to replace Powell If he fails to log a second term in November, foreshadowed fresh clues on the timing of any tapering decisions, saying that September’s employment data could be crucial to assess the rate of progress. Meanwhile, according to another Fed Board Member, Christopher Waller, a 1.6 – 2 million employment increase in July and August could meet the bar for a decision to curtail bond purchases.

In other words, the above suggest that the Fed could put its bond tapering plans in action as soon as September 21-22, or in the best case, in the following policy meeting on November 2-3, after September’s NFP data are released on October 8. Note that the unemployment benefits expire on September 6. Therefore, more people could integrate into the labor market before that day, allowing the Fed to have a clearer view on the economy by then.

The certain thing is that the Fed prefers a smooth transition to monetary tightening to avoid any aggressive declines in bond, stock and FX markets. So, it will probably try to send some hints to prepare investors before making any official announcements, with the Jackson Hole symposium on August 26-28 currently seen an ideal event for Powell to unveil new guidelines around the timing of tapering.

In market reaction, the focus will be on euro/dollar on Friday, which is more sensitive to Fed decisions as the ECB is not expected to adjust its super accommodative policy anytime soon. A stronger-than-expected NFP report could boost the dollar, squeezing the pair towards the 20-day simple moving average (SMA) at 1.1820, while a bigger positive surprise could open the door for the previous low of 1.1752.

Alternatively, if the jobs data miss expectations, signaling that the Fed could delay any tapering of its QE program beyond September, euro/dollar may rebound to fight the 1.1900 ceiling again and meet the 50-day SMA slightly higher at 1.1950.