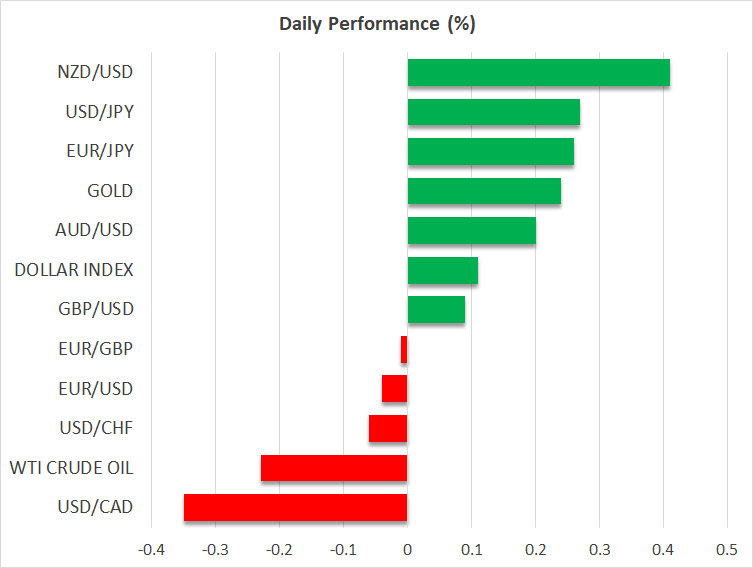 Markets were a lot calmer on Friday after a bumpy week that put the US dollar on the backfoot and Wall Street’s rebound faltered. Big earnings misses from US retail giants sparked concern that the American economy may not be so immune to inflation’s undesirable effects after all, heightening fears of stagflation. But the supply related woes are now starting to impact the tech sector too, with Cisco shares plunging after the company lowered its revenue outlook, while Apple stock also came under pressure.

The S&P 500 was flirting with bear market territory again after losing another 0.6% yesterday, but the Nasdaq Composite fell by a more modest 0.3%.

US stock futures, though, have bounced higher today, as sentiment improved after China’s central bank cut its key lending rate used for setting mortgage rates. The five-year loan prime rate (LPR) was lowered by more than expected to 4.45%, as China attempts to inject some life into its troubled property sector. The one-year LPR, which is the benchmark for most other types of lending, was kept on hold but today’s move was nevertheless greeted positively by equity markets.

There may be more volatility to come

But doubts about the growth outlook haven’t completely faded as initial jobless claims in the United States rose last week for the third straight week, suggesting that hiring could be slowing. The big questions facing investors now are will the Fed be able to achieve a soft landing as it pushes up the cost of borrowing to fight inflation, and even if a major downturn can be averted, is an earnings recession inevitable?

Those questions may take a while to be answered so markets are therefore susceptible to further bouts of volatility until there is more clarity on the outlook. According to Bloomberg, $1.9 trillion of options linked to equities and exchange traded funds will expire today. With markets so edgy about growth prospects, the event could trigger some major moves on Wall Street at the close of the week’s trading.

In the meantime, however, the US dollar was in a chirpier mood today, paring some of this week’s bruising losses. The dollar index advanced by around 0.2% and although the greenback remains vulnerable to downside pressure should more evidence emerge that high inflation is hurting consumers and businesses’ profit margins, it’s likely to consolidate in the absence of any new data.

The yen was broadly weaker amid the brighter risk tone. Data out in early Asian trading showed Japan’s core CPI rate jumped to a seven-year high of 2.1% y/y in April, but investors don’t expect the Bank of Japan to shift its ultra-accommodative stance anytime soon.

UK retail sales were also released today, beating the forecasts. Both the headline figure and the measure that excludes fuel sales unexpectedly rose in April, suggesting UK consumption may be a bit more resilient than previously thought to the cost of living crisis. However, the GfK’s consumer confidence gauge for May fell to a record low, pointing to more pain ahead.

Still, given sterling’s recent long slide, there is room for some further upside correction and the pound is marginally higher today against the greenback and is set to end the week with decent gains. Hawkish comments from the Bank of England’s chief economist, Huw Pill may be aiding the rebound.

ECB policymakers, meanwhile, continue to ratchet up expectations of a July rate hike, though the euro is trading flat today versus the dollar.

The Swiss franc was mixed on Friday but is mostly holding onto its impressive weekly gains. Having weakened to parity just over a week ago with the dollar, the franc got a major boost on Wednesday after SNB Chairman Thomas Jordan said policymakers will act if inflation accelerates, hinting that the SNB could follow the ECB in raising rates in the summer. 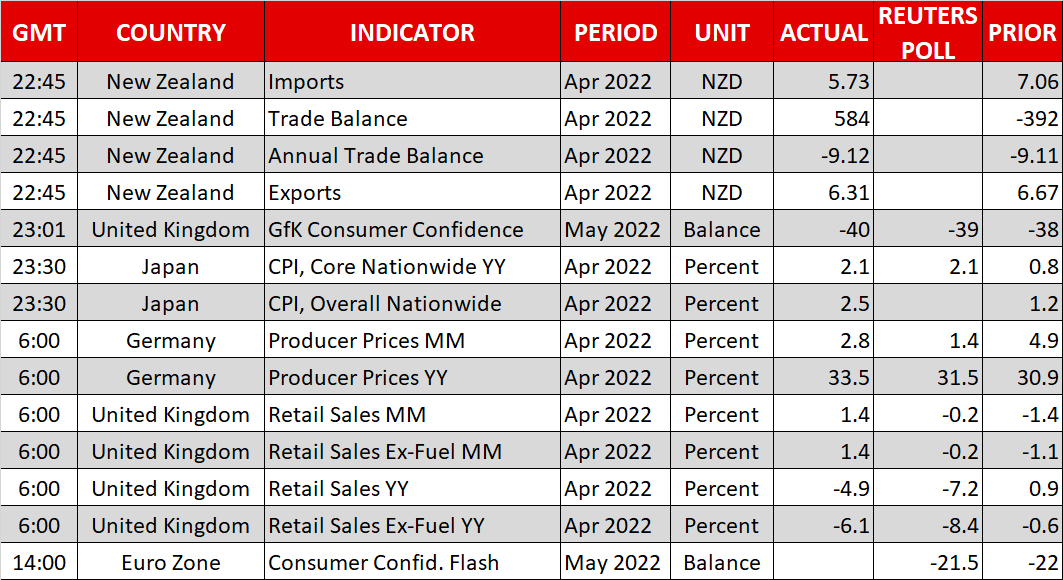