Facebook Inc. rescheduled its Q2 earnings release and conference call for Thursday after the market close, joining other high-profile tech companies which will be reporting financial results on the same day. The event will follow Zuckerberg’s testimony before the House Judiciary Committee on Wednesday and is expected to reveal a weaker quarter for the social media giant. Despite that and the advertising boycott news, recommendations by Refinitiv analysts is to "buy" the stock.Q2 earnings could slow at a softer pace

Facebook came up with mixed results in the first three months of the year, showing an annual increase of 17.6% in total revenues that reached $17,737 billion, and a 9.5% decline in earnings per share that dropped to $1.71. Historically, some weakness in the first quarter is usual when compared to the preceding one, and the numbers did not violate that sequence this year. However, a notable contraction in advertising revenue – the main source of revenue – in March, which added to the 16% overall fall, attracted attention as the government’s social distancing orders forced companies to cut spending that month.

Still, CEO Mark Zuckerberg, who decided not to provide guidance for the second quarter due to the highly uncertain Covid-19 macroeconomic impact, calmed markets immediately and helped Facebook’s stock to quickly recover its losses, saying that in April the reduction in the advertising had stalled. In another positive note, the lockdown proved to be a blessing than a curse when looking at the surging number of daily and monthly active users, which jumped to 1.73 billion (+11% y/y) and 2.6 billion (+10% y/y) respectively in Q1. Live-stream communication and gaming in Facebook’s four most downloaded apps (Instagram, WhatsApp, Messenger, Facebook), was another boon.

With reopening plans taking effect worldwide and businesses returning to operation under some restrictions in mid-May, the decline may have indeed stabilized in the second quarter. According to forecasts, total revenues are said to have eased to 17,400 billion but at a slower quarterly pace of 1.9%, while advertising could have retreated by the same rate to $17,054 billion. On the other hand, earnings per share are expected to have tumbled to a three-year low of $1.39. Markets might also be waiting another increase in active users following Twitter’s expansion announced last week. 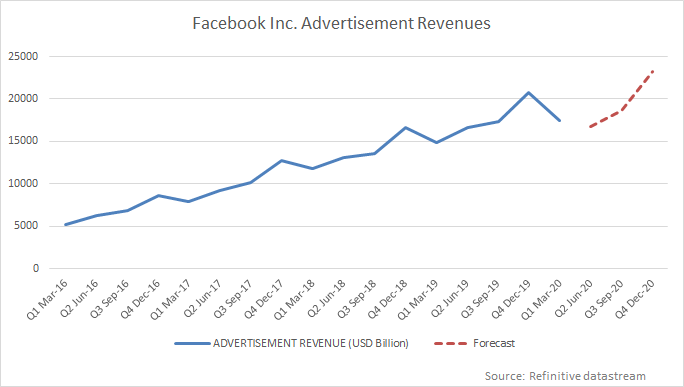 Losing public trust could be worse than Covid-19 impact

In the rest of the year, forward guidance will be missing, therefore earnings releases may prove to be directional amid the rising infection cases that are currently heavily concentrated in the US.

Yet, the virus impact may be considered a light rain versus the advertising boycott started in July. Big-name companies such as Unilever and Coca-Cola have been called to pause their advertising payments in the platform, expressing their anger over the company’s handling of hateful comments and controversial political messages. Specifically, the company came under fire for not taking down President Trump’s post of “when the looting starts, the shooting starts” in reference to George Floyd’s death caused by the US police. The presidential campaign is another headache as President Trump and his Democrat rival Joe Biden are attacking social media sites for influencing voters while paying them a significant amount to make their threats known to the public - kind of reminding the Cambridge Analytica scandal during the 2016 Presidential elections which fined Facebook by five billion dollars.

And if the above is not enough, antitrust authorities are bringing Facebook, Amazon, Alphabet’s Google, Apple, and Microsoft to the court today in order to shed light on whether their recent growing number of acquisitions is choking off competition. Lawmakers could find the hearing as an opportunity to blame companies over political misinformation that influence voters and hurts candidates. So, there is another reason to follow the event, and markets would like Zuckerberg to provide explanations and potential solutions to control the drama in Thursday’s conference call.

Public trust is a valuable asset for any social platform which if damaged could heavily weigh on its brand name and leave permanent scars. However, the advertising boycott and the political-related troubles not only in the US but also in Europe caused little downside to Facebook in Wall Street so far. Its stock is still holding an upward direction and is overperforming both the S&P 500 and Nasdaq 100 communities on a yearly basis. Perhaps, the reason behind this behaviour is that Facebook has turned into a basic need in people’s lives or otherwise a monopoly in the industry and businesses may not find a better alternative to promote their advertising products if they decide to scrap their collaboration with the company. Moreover, the famous social platform is developing new tools and expanding its services to new sectors. From launching a mobile payment service in Brazil to creating the new security App Lock feature for Messenger, and more importantly, developing its own digital currency Libra. Hence, wisely no company would abandon Facebook forever in the face of any advertising or political boycott.

Nevertheless, legal woes combined with a struggling global economy that sees no breakthrough form Covid-19 could add downside pressure to Facebook’s stock in the near-term, especially if the coming earnings releases start to reflect a weakening balance sheet. And conflicts over the expansion of the US pandemic package, which could pressure firms' budgets, extend well into August.

Technically, the stock price is expected to come under renewed selling if it slips below 223.29 which is the 23.6% Fibonacci retracement of the 137.10-250.15 upleg. In this case, the price could next seek support around the 38.2% Fibonacci of 206.71 and the 200-period simple moving average (SMA) in the four-hour chart. Lower-than-expected earnings and more importantly a disappointing speech from Zuckerberg about how the company is trying to resolve its platform imperfections could stage this scenario.

Otherwise, upbeat data and hopes for more recovery in the coming quarters along with convincing comments that Facebook is willing to change its policies could help the stock to re-challenge the 240.50 resistance before heading for the 250.15 record high. Beyond that top, the rally may take a breather somewhere between the 260.00 and 270.00 psychological levels.