Is Qualcomm an attractive bet ahead of its Q1 earnings? – Stock Market News

Qualcomm is set to unveil its first fiscal quarter earnings results for 2022 on Wednesday, February 2, after Wall Street’s closing bell. The semiconductor company is expected to record a solid, double-digit year-over-year growth. Despite its share price appreciating by almost 20% during 2021, the company underperformed both the S&P 500 index and the SOXX semiconductor ETF.5G rollout to drive future earnings

Qualcomm is currently powering most of the premium Android devices with its Snapdragon chips, while its 5G modems provide connectivity on all 5G-bearing mobile phones. The company is leading cellular technologies innovations, targeting to provide 5G in the enhanced mobile broadband and critical-mission communications sector. Moreover, it is striving to deliver the technology for the Internet of Things, which seamlessly connects everything from smart home devices to smart cities. 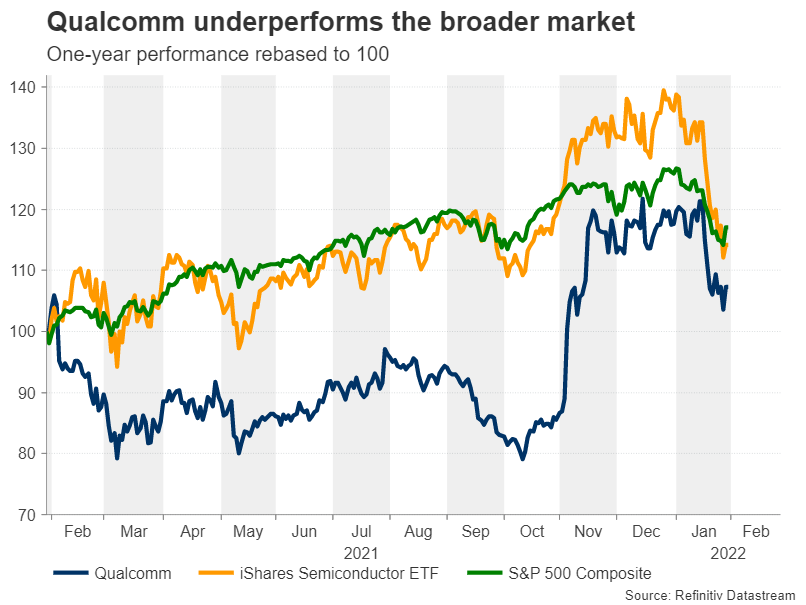 The San Diego-based corporation has recently taken the wraps off its latest 5G (Snapdragon 8 Gen1) and gaming (Snapdragon G3x Gen1) platforms. Those newly released products are expected to shape the next generation of flagship mobile devices and provide superior performance on all Android mobile games. Investors are anticipating that those two platforms will have benefitted the company’s first fiscal quarter revenues.

Attention shifts to the metaverse

The company has recently announced a collaboration with Microsoft to produce the next generation of chip’s that will power Microsoft’s lightweight augmented reality glasses. Qualcomm has also struck a deal to provide its chips for Meta’s virtual-reality headset, Quest 2 VR. Those new deals are placing the company in the middle of the metaverse revolution, which could catalyse future growth.

Qualcomm is advancing heads-on in the autonomous-driving market, aiming to boost revenues beyond its traditional smartphone chip-making business. The company’s acquisition of Veoneer’s autonomous software business back in October was another step towards expanding its current Snapdragon Ride Platform for Advanced Driver Assistance Systems (ADAS).

The San Diego-based company has recently reached an agreement with BMW to extend their long-lasting technology collaboration to automated driving. Moreover, Qualcomm also announced that its Snapdragon Automotive Cockpit Platform will power Peugeot’s 308 digitally advanced communication and infotainment system. Therefore, investors are optimistic about the future revenue prospects of its autonomous driving business. 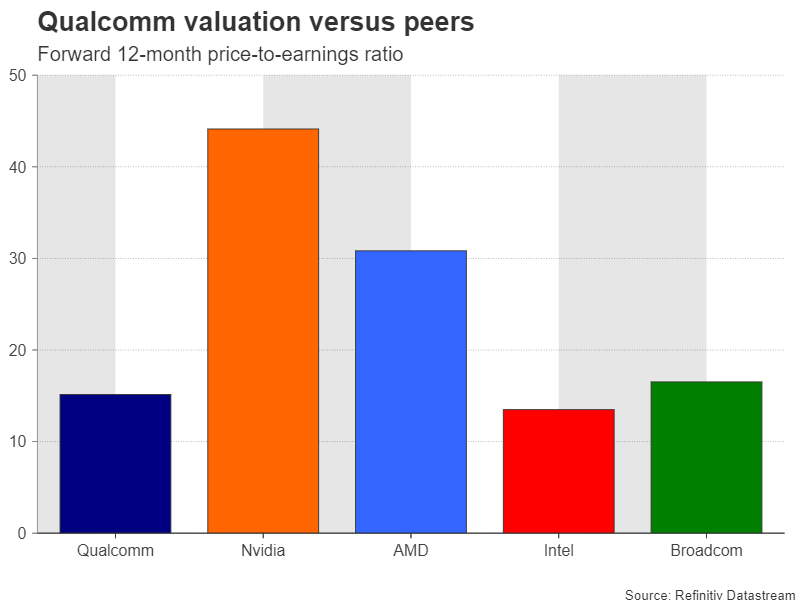 Future risks are building up

For the period ended on September 26, sales in China accounted for more than 67% of the company’s total revenues. This high revenue concentration in the region poses a significant risk as its Chinese clients have already begun to develop their own integrated circuit products to comply with Beijing’s ‘Made in China 2025’ campaign, which targets 70% semiconductor efficiency by 2025.

Another headache for Qualcomm is Apple’s intention to switch over to its own in-house 5G modems, stripping the company from a steady source of revenue. Moreover, investors are fearful of Nvidia’s attempted takeover of Arm Holdings, which has yet to be given the green light by UK antitrust authorities. If this takeover takes place, it could give Nvidia a great deal of control over Qualcomm, which partly relies on Arm’s technology.

According to Refinitiv estimates, analysts are targeting $10.4 billion in revenue and $3 in earnings per share for the first fiscal quarter, marking a 26.4% and 32.5% year-over-year growth, respectively. Investors will also be taking a closer look at Qualcomm’s inventories, which are expected to mark a 26% year-over-year increase, reflecting the company’s ability to navigate relatively well through the ongoing supply chain bottlenecks. 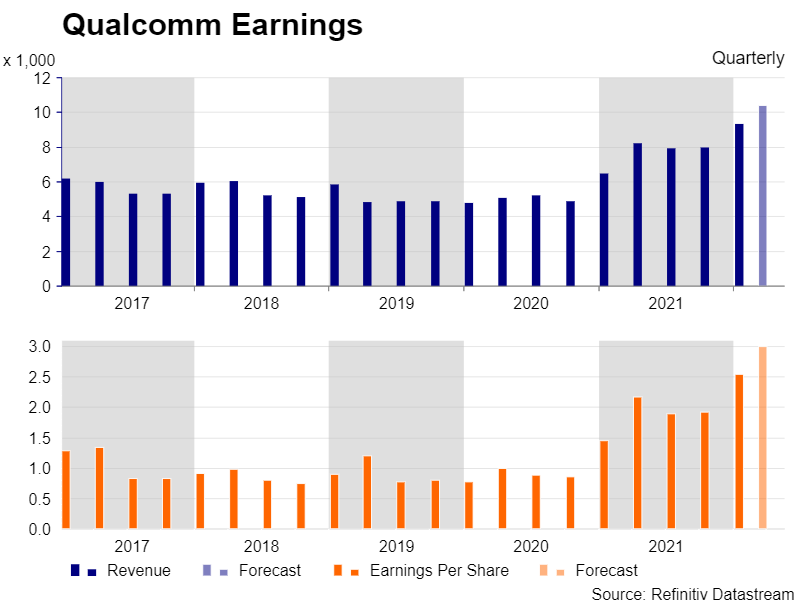 However, investors are fearful that the first fiscal quarter results may point to some struggle and uncertainty. Even if the company clocks a robust 26.4% yearly revenue growth, the figure will still lag the revenue growth of previous quarters, stressing the supply issues affecting client’s deliveries. Therefore, the spotlight will once again fall on management’s comments regarding the outlook of the ongoing supply crunches.

From a valuation perspective, Qualcomm has a forward price to earnings ratio of 15, which denotes the dollar amount someone would need to invest to receive back one dollar in annual earnings. The company appears to be trading at a discount compared to peers despite the diverse revenue drivers beyond 5G, as risks and doubts appear to trump its prospects in the eyes of investors.

The company is currently trading over 7% below its all-time high, lagging the recent declines of other major semiconductor companies during the January sell-off. Taking a technical look at its stock, better-than-expected results could push the price towards the $173.46 hurdle before buyers shift their attention towards the 50-day SMA currently at $179.6.

To the downside, should the numbers come out worse-than-expected, the bears might send the price to test the $157.38 obstacle, before shifting their attention towards the 200-day SMA currently at $149.28.