With the Fed meeting out of the way, a quieter week is on the horizon, barring of course any flare up of tensions between Russia and Ukraine. Either way, the spotlight will probably fall on the euro as far-right parties are expected to gain ground in Italy’s parliamentary election on Sunday, while preliminary inflation readings will come to the fore at the end of the week. In the US, the highlight will be on the PCE inflation figures, though it’s doubtful whether it will change much regarding the Fed policy outlook. Euro on election alert, flash CPI on the way too

The euro just can’t catch a break lately, whether it’s the energy crisis or the Fed out-hawking the ECB, there’s always trouble around the corner and next week, that could come in the form of political risks. Italians go to the polls on Sunday to elect a new government. It comes after the collapse of Mario Draghi’s technocratic government in July, which sparked a snap election.

Leading the opinion polls is the far-right Brothers of Italy party who look set to govern in a coalition along with the League and Forza Italia parties. Forty-five-year-old Giorgia Meloni, who founded Brothers of Italy, is on course to become the country’s first female prime minister. But markets are worried what this may mean for EU-Italy relations, how it may stoke fascism, and the risk it poses to the Draghi-formulated economic recovery.

However, the implications of a Meloni-led government may not be known immediately as she has pledged to be prudent with the country’s finances and avoid confrontation with the EU. Nonetheless, Italian government bond yields may spike higher next week if the right-wing alliance does indeed win a majority.

Any widening of peripheral yield spreads might weigh on the euro, though there could be some support for the single currency on Friday from the latest flash CPI estimates for the Eurozone. The headline rate of inflation is expected to have edged up to a new record of 9.4% in September. The hawkish soundbites from ECB policymakers have been gradually getting louder over the last few weeks and there could be more of that from President Lagarde when she testifies before the European Parliament on Monday. As long as policymakers maintain this rhetoric, it should prevent the euro from slumping too far below the parity level. 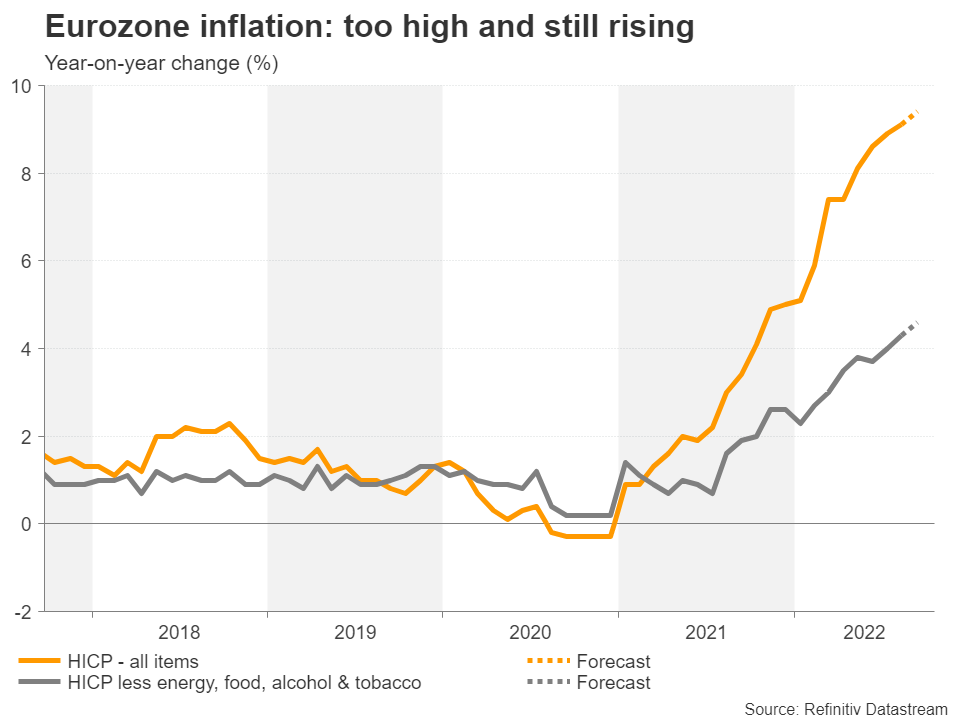 In other data, business surveys comprising the economic sentiment indicator (Thursday) and Germany’s Ifo business climate gauge (Monday) might also be watched for clues on how quickly the Eurozone economy is losing steam.

Will yen intervention keep the dollar bulls at bay?

Just as markets thought that the Fed couldn’t get more hawkish, it did just that. Although the Fed didn’t accelerate its tightening pace in September as some had expected and the terminal rate in the dot plot wasn’t that far off from the market’s, Jay Powell was at his most convincing yet in his press conference that the Fed will do whatever it takes to get inflation back down to 2%, even if it costs a hard landing to get there.

Both Treasury yields and the US dollar extended their gains in the aftermath, but the latter’s uptrend now faces some unexpected challenges. Japan’s government finally decided to intervene in the FX market after the yen breached the 145 level, ordering the Bank of Japan to conduct a yen-buying operation. 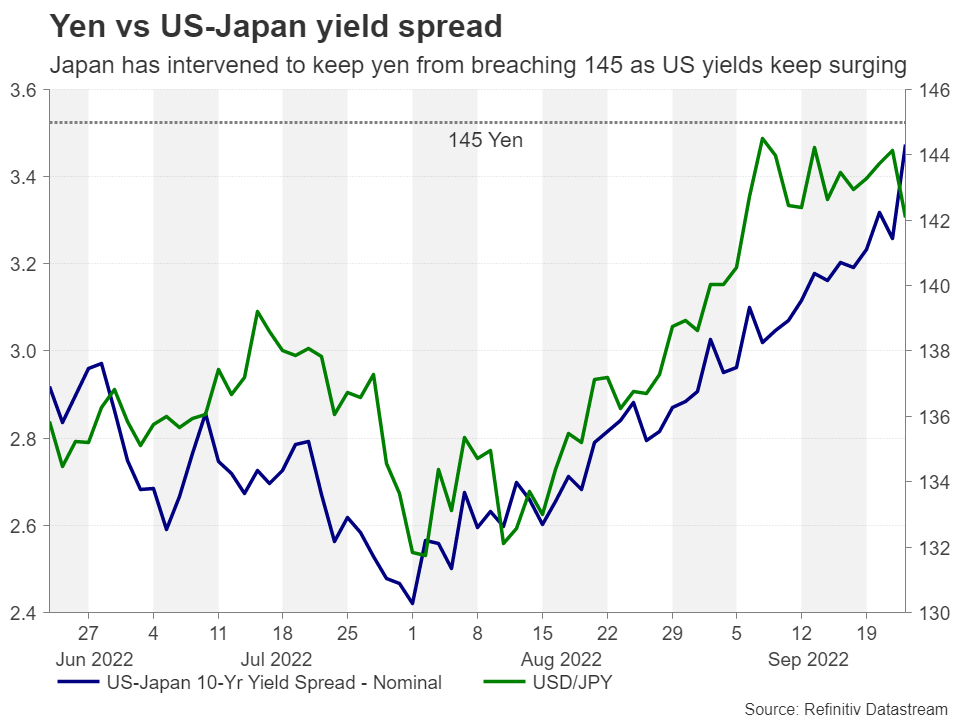 Yes, the move did trigger some broad profit-taking in the dollar, but the view on how successful such a policy of one-sided intervention can be until the day comes for the Fed to make its first dovish pivot hasn’t changed. It may only be a matter of time before speculators flood into dollar/yen again.

However, it’s possible that the BoJ will not be alone for much longer in defending its currency. Other Asian central banks such as the Bank of Korea and the Bank of Thailand have also been keeping a close eye on their currencies amid the rampant dollar. Should they step in too over the coming days, the collaborative effort may give Japan’s intervention more credibility.

And with not a lot of top-tier data on the agenda over the next seven days, further central bank intervention might just work in keeping a lid on the dollar’s gains for the time being.

PCE inflation may not excite this time

The US releases will kick off with durable goods orders and the closely watched consumer confidence gauge on Tuesday. There will also be a slew of housing data, including new home sales for August. Pending home sales will follow on Wednesday. Housing indicators have been somewhat mixed lately so next week’s numbers might help shed better light on how severe the slowdown actually is.

On Friday, the all-important personal income and outlays report, which contains the PCE inflation figures as well as spending and consumption data, is due. After the Fed sent a clear policy message at its meeting, it’s unlikely that this dataset will alter much as far as the outlook is concerned. 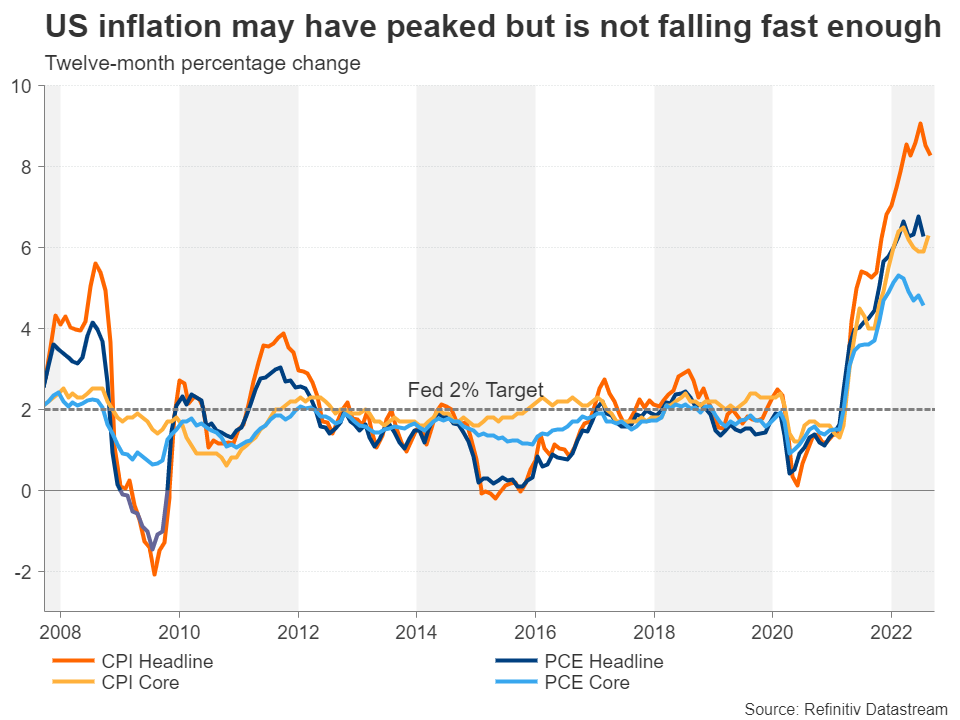 Nevertheless, a stronger-than-expected print in the core PCE price index would be positive for the dollar, while any worrying weakness in personal consumption could potentially weigh on Wall Street.

A light calendar all round

Elsewhere, it’s going to be even quieter for the pound and the commodity-linked currencies, which have taken quite a battering in recent weeks from the strengthening dollar and deterioration in risk sentiment. From domestic drivers, there could be some reverberations for the pound from Friday’s mini budget that could echo into the following week.

The UK government just unveiled the second biggest tax cutting budget in its history, which will be financed entirely by borrowing. UK bond yields surged on the announcement, in a sign that investors are more anxious about the implications of rising debt levels than the boost to growth. This leaves sterling even more exposed to risk-off episodes than it already is. 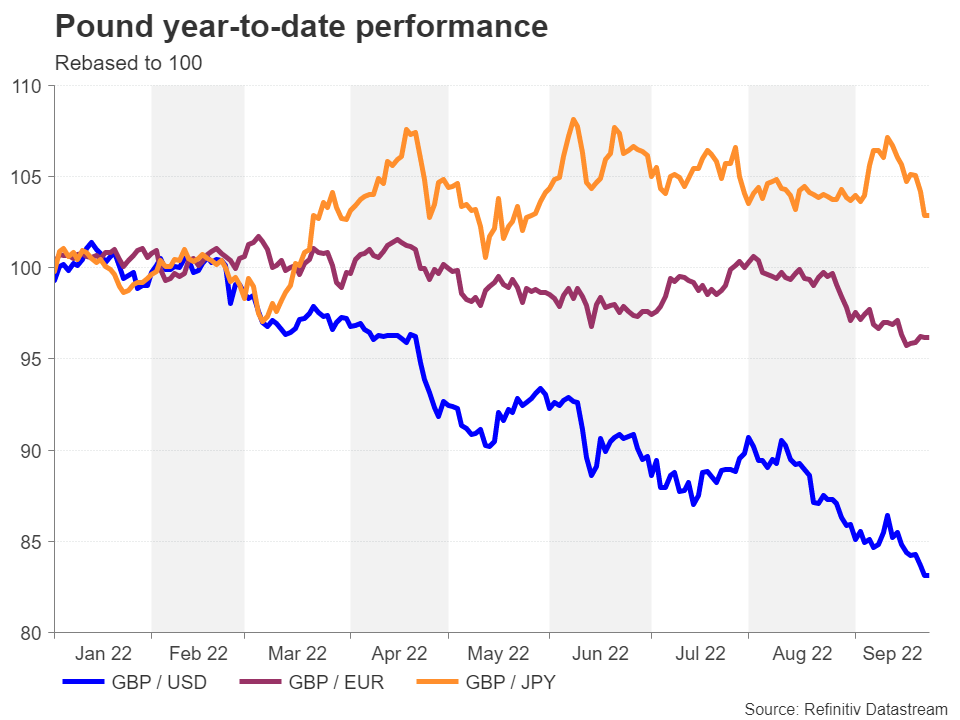 Final UK GDP readings for the second quarter due next Friday can be significant as well if there is an upward revision to the initial estimate of -0.1% q/q, which would ease fears that the UK economy is already in a technical recession.

For the Australian dollar, there may be some relief from the selloff if the manufacturing PMIs out of China on Friday point to improving economic momentum in September, while monthly GDP stats out Thursday in Canada might attract some attention for the loonie.