Nvidia will unveil its earnings results for the third quarter on Wednesday after Wall Street’s closing bell. The largest chip-maker by market capitalization is expected to record a solid, double-digit year-over-year growth. Shares of the company have surged by almost 40% over the last month, on belief that the recent spending bill announced from Facebook for the creation of its Metaverse could materialize in $10 billion addressable market opportunity for Nvidia.Not a typical chip maker

In a recent event, the Santa Clara-based company has taken the wraps off its new multi-Graphics Processing Unit (GPU), real-time development platform for 3D simulations, called Omniverse Enterprise. This ground-breaking product could unite teams and their assets in a digital twin, simulating anything from 5G networks to autonomous vehicles. Moreover, the company’s CEO Jensen Huang stressed the ongoing enhancements of artificial intelligence chips used in supercomputers, data centres and driverless cars. 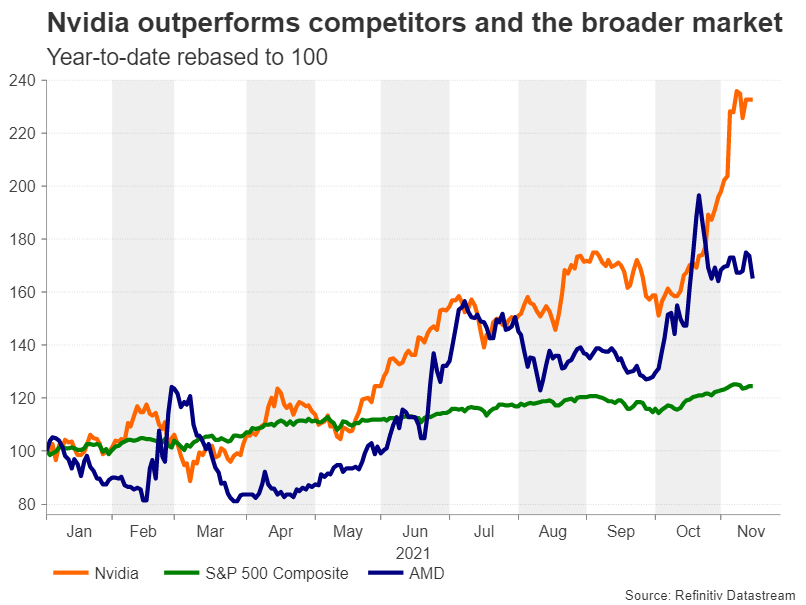 The company also unveiled its new robotics processor Orin, which is expected to power self-driving cars, robots and autonomous machines of all kinds. In addition, the recently created end-to-end robotics platform Isaac allows clients to input data, simulate, train, and then deploy an AI system into the real world with speed and flexibility. Those new and innovative products, together with the company’s first Central Processing Unit (CPU) card, are likely to prove growth catalysts for Nvidia.

Despite its unmatched dominance in the GPU market, Nvidia currently faces fierce competition from its peers. Its arch rival–AMD–has recently rolled out its new MI200 GPU for high performance computing and AI acceleration, taking on Nvidia in the data centre space. Intel is also emerging as a potential long-term threat as the company expects to bring out its first GPU for AI applications in 2022, and has already launched its first line of graphics cards, aiming to penetrate the gaming market.

The Santa Clara-based company also faces challenges in closing the $40 billion Arm takeover deal, which if finalized, could boost growth in terms of cost saving and addressable market. Moreover, Nvidia is currently outsourcing its production line to Taiwan, which exposes the company to geopolitical risks due to the ongoing friction between Taiwan and China.

According to Refinitiv estimates, analysts target $6.83 billion revenue and $1.11 in earnings per share (EPS) for the third quarter, marking a 44.4% and 52.1% year-over-year growth, respectively. Also, after management’s guidance, gross margins are expected to reach 67%, reflecting the pricing power the company has on delivering high-end performance products. Therefore, a potential earnings beat could maintain the stock’s price positive momentum. 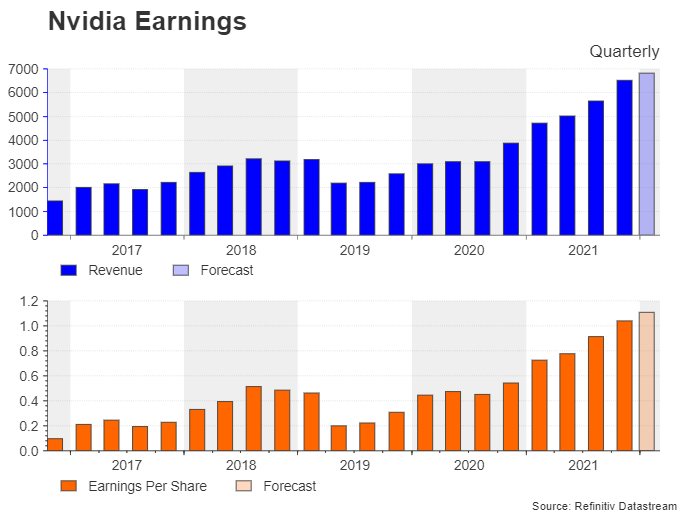 However, the sustainability of an immediate price change might depend on management’s discussion regarding the business conditions, as the company makes the bulk of its revenues from gaming cards, which continue to be in short supply. Moreover, despite the fact that the management has previously acknowledged that the Arm acquisition deal is unlikely to be completed before the initial deadline of March 2022, any positive surprise in the upcoming earnings call may boost Nvidia’s share price.

Nvidia’s stock has rallied by over 130% in 2021, with further gains on the table should the company witness positive earnings surprises. Better-than-expected results could push the price above its 306.8 resistance level. Overcoming this barrier, the price could test its all-time highs at 323.1, before entering uncharted barriers, possibly targeting the 350 mark.

To the downside, should expectations come out worse-than-expected, the bears might send the price to test its 296.5 support. Moving below that level, the market might seek immediate support at the 287.4 barrier before testing the 270.9 level.

From a valuation perspective, Nvidia has a hefty forward price to earnings ratio of 66, which denotes the dollar amount someone would need to invest to receive back one dollar in annual earnings. Moreover, the Santa Clara-based company appears to have a much higher valuation than its competitors from a price to earnings perspective. 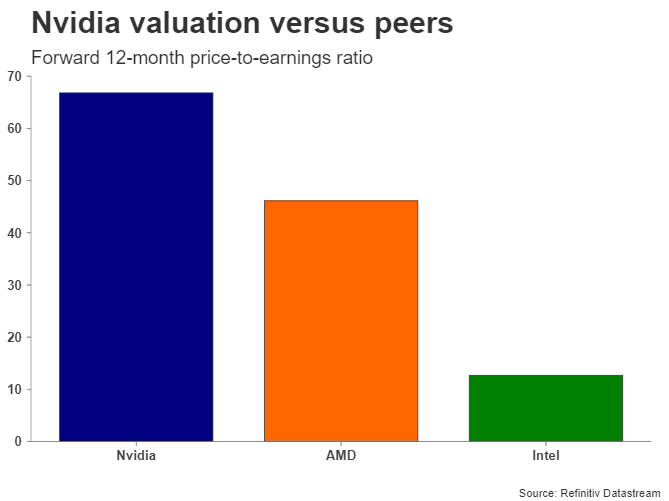 The high valuation can be attributed to the competitive edge that the company currently holds by being the dominant force in the GPU space with almost 83% of the total market share. Despite this high valuation, currently seen as a key risk factor for investors, Nvidia’s outlook is perceived as incredibly strong in the long run. Therefore, analysts remain optimistic about Nvidia’s long-term prospects, maintaining their ‘buy’ recommendation for its stock.