Nvidia is set to unveil its fourth quarter earnings results for 2021 on Wednesday, February 16, after Wall Street’s closing bell. The fabless chip-maker is expected to record a stellar, double-digit year-over-year growth. Despite depreciating by almost 20% so far in 2022, Nvidia’s stock has been a standout performer over the past year, outperforming the broader market. Nvidia’s story continues to be GPUs

Nvidia currently holds the lion’s share in the global Graphic Processing Unit (GPU) market due to the high performance and immense gaming capabilities of its GeForce family of GPUs. The increasing global demand for graphics cards, together with the ongoing limited supply, has benefitted Nvidia’s GPUs pricing. With those trends not expected to subside soon, revenues from the company’s gaming segment could continue to increase going forward.

Moreover, the continuing trends towards cloud adoption and advanced AI technologies are also expected to act as major tailwinds for the company’s fast-growing data center revenues. The Santa Clara-based company currently provides GPUs for the world’s largest cloud providers, such as Amazon, Microsoft and Alphabet. Considering those companies’ plans on spending billions of dollars to further expand their tech infrastructure, Nvidia is found at a prominent position to capitalize on such developments.

The chip maker is also speeding up the build-up of its cloud gaming service GeForce now, which enables subscribers to stream over 1,000 games on their desktops and mobile devices. The user base of its service has grown to over 15 million members, with subscriptions expected to pick up as the company’s partnership deals with Samsung and AT&T would bring the service to TV and 5G customers, driving future profits.

With the metaverse evolution still in progress, the companies developing the next generation of the internet will require increasing numbers of high-performance hardware and software products. On the hardware side, Nvidia is set to benefit from growing GPU demand, while on the software side, the company can benefit through its Omniverse Enterprise platform, which could become the place where companies design and create virtual worlds.

Since its beta launch last year, nearly 100,000 creators have already downloaded the platform, with Nvidia currently pricing a minimum of $9,000 per year for its Omniverse Enterprise solution. Therefore, as the demand for such products is expected to soar in the coming years, the platform’s addressable market could increase dramatically, catalyzing Nvidia’s future growth. 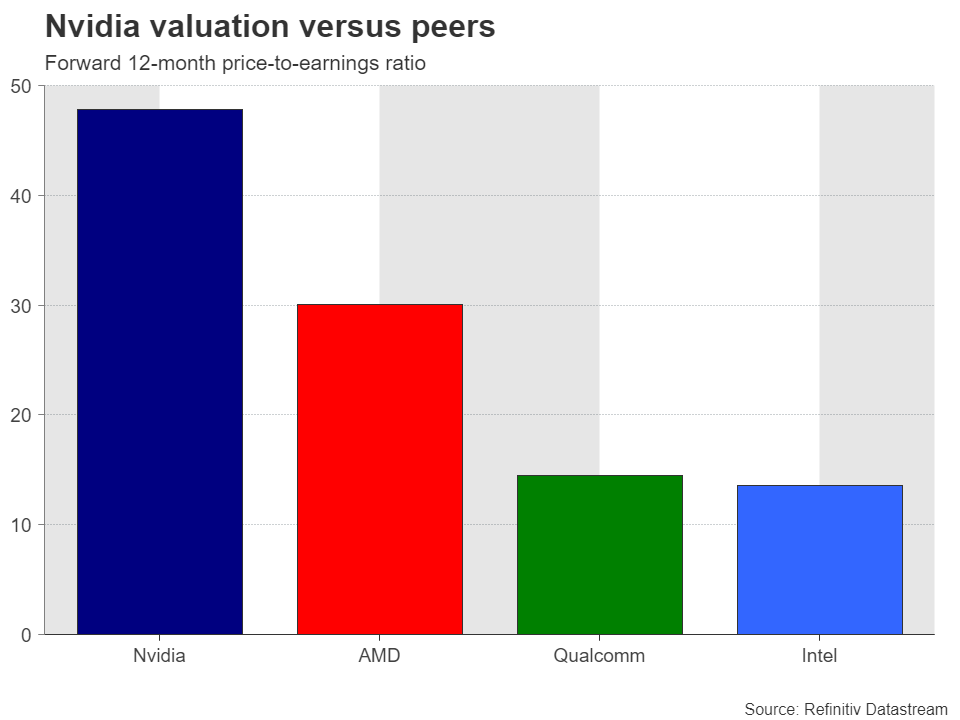 Despite its unmatched dominance in the GPU market, the company is currently facing fierce competition from its peers. Later this year, Nvidia and its arch rival - AMD - are expected to launch their next generation of GPUs, with rumours stating that AMD’s RDNA 3 GPU could be more power-efficient, eroding Nvidia’s dominant market share.

Moreover, Intel is also expected to enter the graphics market in 2022 with its discrete ARC GPU, codenamed Alchemist, which is expected to compete with Nvidia’s mid-end graphic cards. However, even if Intel cannot compete with Nvidia’s highly priced products, if it pushes enough GPUs into the market this year, the supply of scarce graphic cards would increase, which could cause a moderation of current GPU pricing, hurting Nvidia’s gaming revenues.

Nvidia calls off its efforts to acquire Arm

On Monday, February 7, Nvidia and SoftBank announced the termination of Nvidia’s acquisition of Arm, which is considered as a short-term setback for the firm’s expansion plans. During the upcoming earnings call, investors will be looking for a comment regarding the company’s failed acquisition and the $1.25 billion break-up fee paid to Arm’s parent company, SoftBank Group. 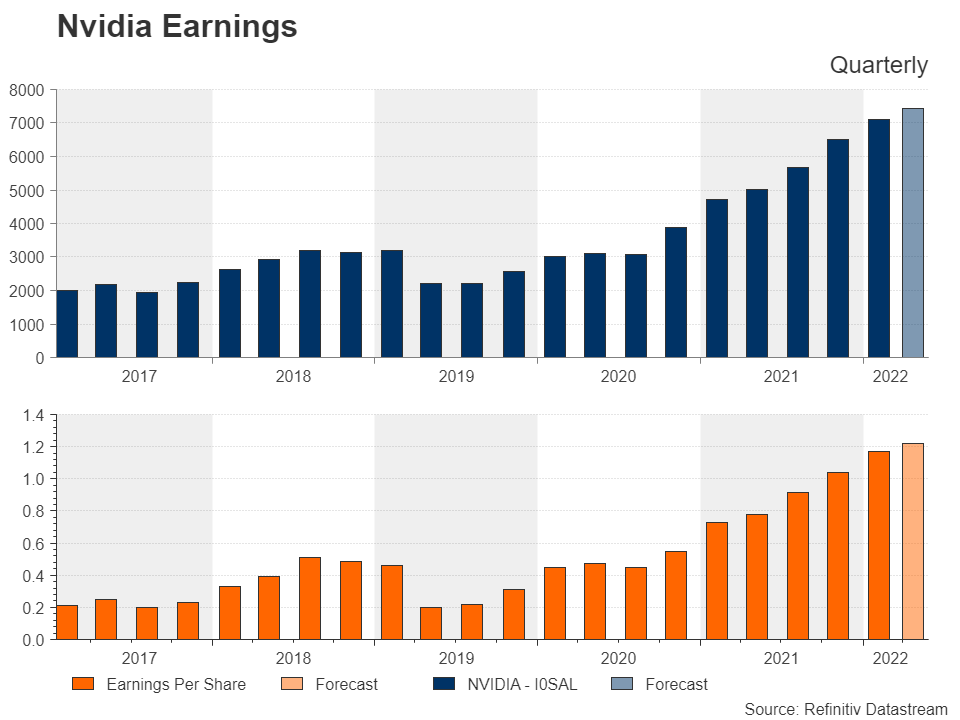 According to Refinitiv estimates, analysts are targeting $7.4 billion in revenue and $1.22 in earnings per share for the fourth quarter, marking a 47.9% and 57.6% year-over-year growth, respectively. Although better-than-expected results could positively affect Nvidia’s share price, the sustainability of an immediate price change might depend on management’s discussion around the ongoing chip supply bottlenecks and the company’s guidance for the first quarter of 2022.

Is Nvidia a long-term play?

From a valuation perspective, Nvidia has a hefty forward price to earnings ratio of 47.2, which denotes the dollar amount someone would need to invest to receive back one dollar in annual earnings. The Santa Clara-based company appears to have a much higher valuation than its competitors, which could be attributed to its dominant position in the GPU space with almost 83% of the total market share.

Despite Nvidia’s share price depreciation by over 25% from its all-time high, the stock might continue to face short-term pressures due to the current increasing interest rate environment. However, the company is well positioned to capitalize on the long-term growth tailwinds of the semiconductor sector. Moreover, it should be noted that despite the huge metaverse potential, leading companies in the sector, such as Microsoft and Meta, are currently trading at a huge discount compared to Nvidia.

Taking a technical look at Nvidia’s stock, better-than-expected results could push the price towards the $258 hurdle before buyers shift their attention towards the $272 obstacle.

To the downside, should the numbers come out worse-than-expected, the bears might send the price to test the region which includes the $230 level and the 200-day simple moving average (SMA) currently at $225, before eyeing the $209 barrier.