The latest jobs numbers out of Canada are due at 13:30 GMT on Friday. Forecasts point to another decent report, which could dispel some expectations for a rate cut by the BoC in the coming months, and perhaps lift the loonie on the news. That said, as long as markets continue to agonize about the impact of the coronavirus on the global economy and commodity demand, any recovery in the oil-sensitive currency might remain short lived.

The New Year so far has been a most unpleasant period for the Canadian dollar, which has been devastated by a plunge in oil prices amid fears about the impact of the deadly coronavirus on global oil demand. The dovish shift by the Bank of Canada (BoC) didn’t help either. The central bank put a rate cut firmly on the table at its latest meeting, citing a slowdown in consumption, investment, and jobs growth.

This took place before the virus outbreak, so it’s logical to assume policymakers are even more worried now given the newfound risks for global growth and Canada’s export-heavy economy.

Amid all this, money markets are pricing in a 55% probability for a rate cut by April, while a cut is fully discounted by July. That seems realistic, and, if anything, the risks might even be skewed towards an earlier rate cut than July if the softness in the data persists and oil prices don’t rebound soon.

An exercise in risk management

Of course, there are arguments against cutting rates too – namely, financial stability risks. The housing market has started to pick up again, and cutting rates would only push house prices higher, potentially inflating a real estate ‘bubble’. Likewise, Canadian households are already heavily indebted, so incentivizing them to take on even more debt by slashing rates may end up counterproductive, as it could hold back spending in the longer term. 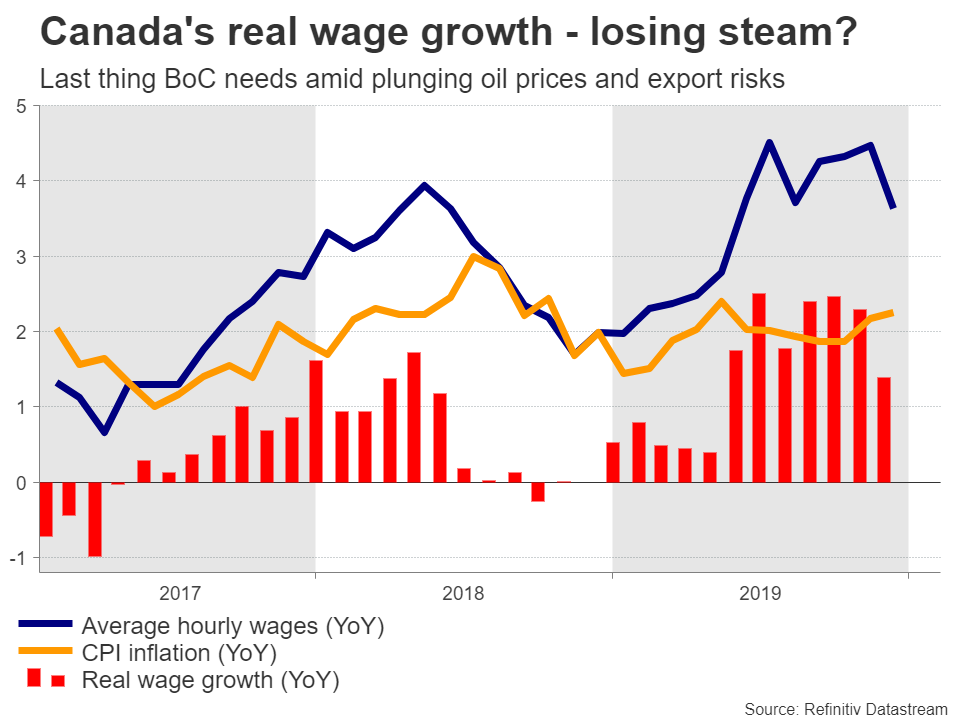 Financial vulnerability concerns likely explain why the BoC has kept its fingers away from the easing button so far. However, that may not remain the case for long, because if the Canadian economy continues to cool, then the benefits of a rate cut will suddenly outweigh the potential costs.

Employment data crucial for this puzzle

In January, the labor market is forecast to have added 15k jobs, less than the 27k in December but still a decent number overall. The unemployment rate is expected to have held steady at 5.6%. The most crucial number though, may be average hourly earnings. Wage growth has slowed lately and if this persists, it would be a bad omen for future consumption and growth.

With markets viewing the prospect of an April rate cut as a coin toss, any surprises in these data could be crucial.

In the bigger picture, as long as the market is focused on virus risks, the outlook for the loonie looks clouded. Even if the upcoming jobs data manage to lift the currency, any upside reaction may fade before long, as global risk sentiment remains in the doldrums and oil prices can’t get off the floor even despite mounting signals that OPEC is willing to slash production further.

For oil prices and the loonie to be able to rally in a sustainable manner, markets may need positive signs on the virus front first. For instance, if the clinical trials for a drug cure in China prove successful, that would probably do the trick. At the very least, investors may need to see the rate of increase in infections leveling off.

Looking at dollar/loonie technically, a pullback in the pair may find initial support near 1.3250, where a downside break could open the door for a test of 1.3170.

On the upside, further advances may stall around the 1.3320 region first. A bullish break might open the door for the nearby resistance hurdle of 1.3345.