As the US earnings season continues in earnest amid the virus shutdowns, one of this week’s highlights will be the results from the Walt Disney Company. Disney will unveil its second quarter earnings on Tuesday after the market close and is expected to report growth in revenue. But with business activity not too significantly disrupted during the first three months of the year, the market’s reaction will depend on the Company’s outlook for the rest of the year. 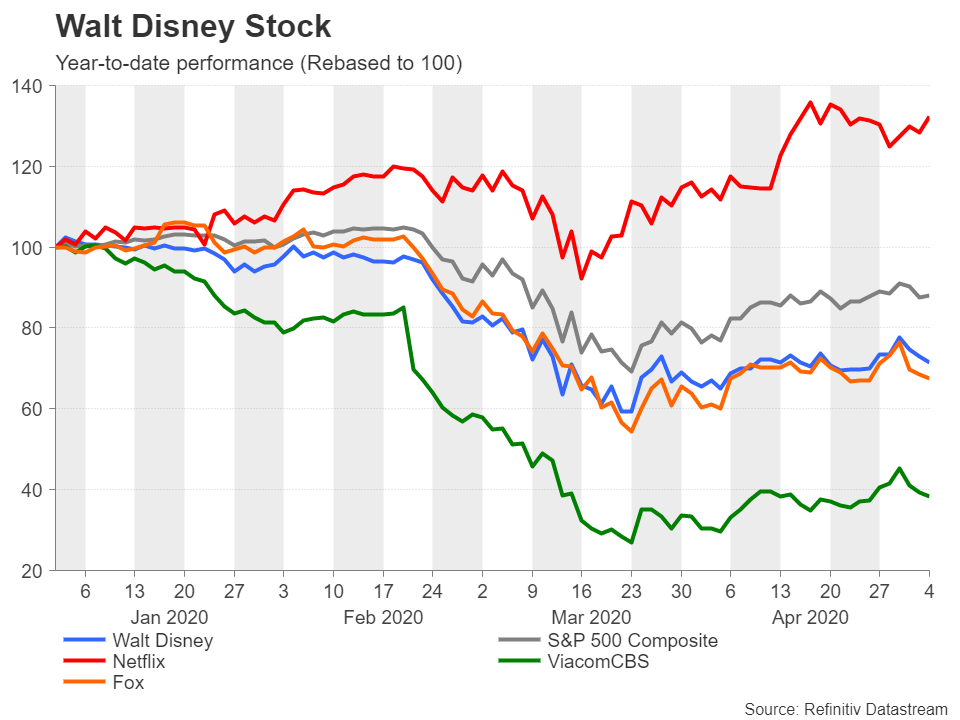 Nationwide lockdowns and draconian social distancing rules have been catastrophic for the global leisure industry where large crowds form a core component of how those businesses operate. For a company like Disney, where more than half of its revenue is derived from its Studio Entertainment and Parks, Experiences and Products segments, the closure of movie theatres, theme parks and resorts are likely to create a huge dent in its income.

But as far as the March quarter is concerned, the impact is anticipated to have been minimal as the United States did not go into shutdown until late March. Disney is expected to have increased its revenue for the fourth straight quarter, rising by 19.4% over the year to $17.8 billion, according to I/B/E/S Estimates by Refinitiv. Earnings per share (EPS) are not forecast to be as strong, however, and are estimated to have plunged by 46.5% to 86 cents. 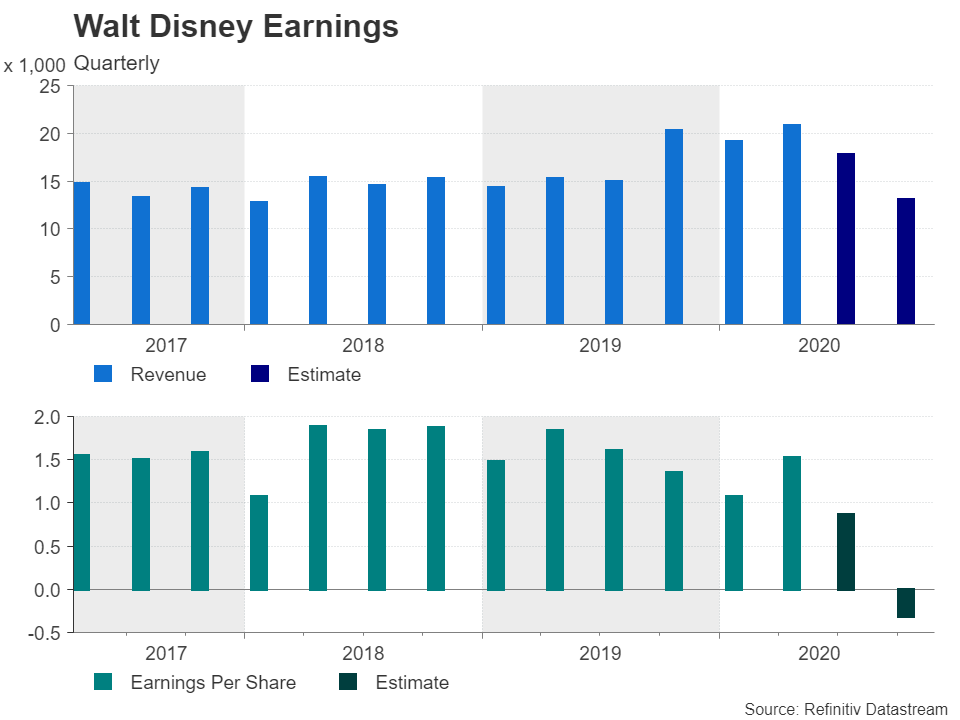 EPS heading towards a loss

Disney’s EPS had been hurt in recent quarters from the cost of absorbing big acquisitions and the setting up of its streaming services. EPS is expected to suffer further in the next two quarters, falling to a loss of 27 cents in fiscal Q3. There is little doubt that revenue will take a major hit in Q3 as income dries up from traditional sources.

You could therefore say that the launch of the Company’s newest streaming service, Disney+ couldn’t have come at a better time. With the number of paid subscribers to Disney+ hitting the 50 million mark globally in a very short period of time, soaring income from the Direct-to-Consumer & International segment should go some way in compensating for the near collapse in sales from its other divisions.

However, given the size of those other segments, there are major concerns about the outlook even as many states across America as well as most of Europe begin to ease the lockdown restrictions. The main worry is the potentially long-term impact of the COVID-19 pandemic on large gatherings. The consequences of having social distancing guidelines in place permanently would impact a whole array of Disney’s businesses: movie theatres may remain shut indefinitely delaying the release of new blockbusters, a prolonged ban on sports events would be devastating for its much-prized ESPN sports channel and theme parks would operate at reduced capacity. Advertising revenue would also fall victim from the decreased activity at those operations, further hurting Disney’s bottom line.

How the Company decides to respond to this emerging ‘new normal’ is what investors will be seeking to find out at the earnings call. Disney has a tough challenge on its hands – it not only needs to cut expenses drastically during the economic downturn but in order to resume operations at many of its facilities, it would have to incur one-off costs to adapt to the latest health and safety practices.

Disney stock has been underperforming

If investors are satisfied with the Company’s pandemic response plan, Disney stock could reverse back up again and revisit the April peak of $112.70. Overcoming this would turn attention to the 50% Fibonacci retracement of the November-March downtrend at $116.24. But if Disney’s earnings disappoint, the stock would likely remain capped by its 50-day moving average and drift lower towards the 23.6% Fibonacci of $96.61. Breaching this support would pave the way for the March trough of $79.07.

At the moment, the stock is just able to hold on to its ‘buy’ recommendation but could easily be downgraded if the earnings results raise doubts about Disney’s future prospects. The share price has recovered about 30% from the low point reached after the March stock market crash, but it is still down almost 29% year-to-date, underperforming the S&P 500, which is down about 12%.

On the price/earnings (PE) ratio front, however, it’s not looking too badly for Disney. Its PE ratio (16.5) is only marginally above that of most of its competitors but sharply below that of its main rival, Netflix (111.2), meaning the stock is far from being considered overvalued.