The Walt Disney Company will report its earnings results for the fourth quarter on Thursday after the close of trading. However, with the launch of its Disney+ streaming service just days away, all eyes will be on the Company’s guidance on future earnings amid concerns about the oversized budget for the new shows on the platform and a number of big acquisitions recently.

Revenue forecast to rise but EPS to fall

Disney is forecast to post revenue of $19.08 billion for the fourth fiscal quarter ending September 2019, according to Refinitiv I/B/E/S Estimates. This would represent an annual increase of 33.3% but a 5.8% drop from the previous quarter. 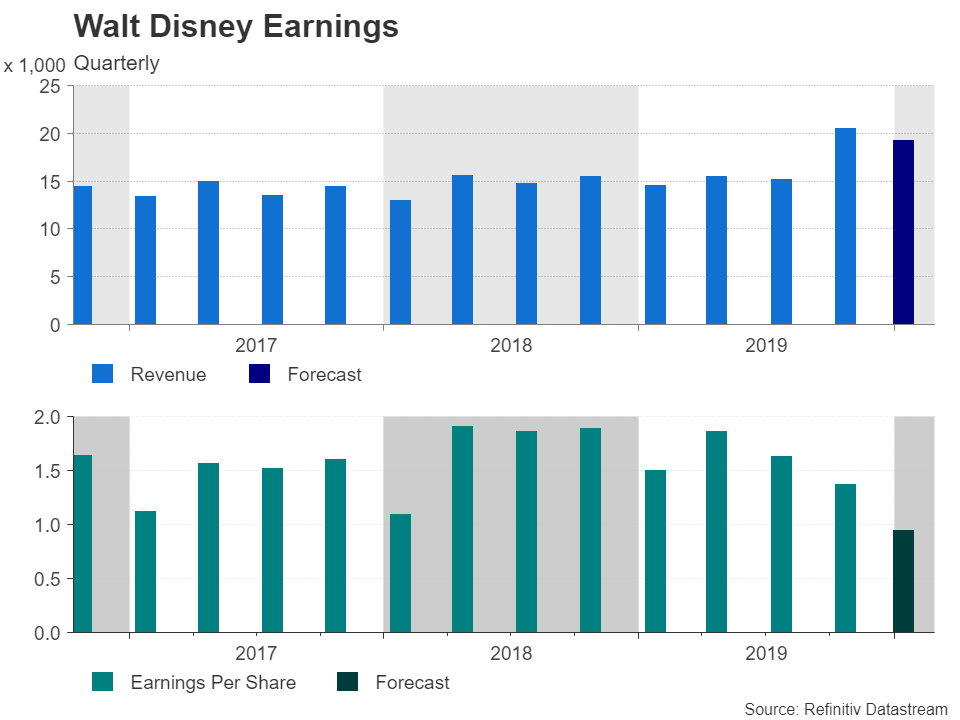 Revenue surged in the third quarter following the Company’s acquisition of 21st Century Fox in March this year. But expenses also ballooned, and investors will be keen to see some cost synergies emerging from the deal.

However, the real attention will not be on the reported earnings but on the Company’s projected revenue for the coming quarters and on any early subscriber numbers for the Disney+ offering. Disney will release its latest Star Wars instalment in December, while its streaming service is set to start on November 12, initially in the United States, Canada and the Netherlands only, before slowly launching in other countries as well.

Although Disney has so far had a positive response to its foray into the streaming industry – its stock price shot up after the Disney+ announcement – it faces tough competition from the likes of Netflix, Apple and Amazon. Disney+ will launch at just $6.99 per month, making it cheaper than Netflix and Amazon. The Company has also struck a deal with Verizon, which will offer its customers with a wireless unlimited plan free Disney+ subscription for a year, boosting the number of subscribers at the launch.

Some concerns about rising debt

However, whether this strategy pays off and ultimately boosts earnings per share remains to be seen. Disney is certainly taking a gambit by competing directly in the streaming arena with established players like Netflix and HBO. Its unstoppable expansion in the past few years has pushed the Company’s debt-to-equity ratio to a decade high of 0.64 as per third quarter (though this is still below the average in the entertainment industry).

For now, the rising debt burden doesn’t appear to be worrying investors and analysts have maintained their ‘buy’ rating for the stock. Disney’s share price is up almost 20% in the year-to-date, slightly outperforming the Dow Jones Industrial Average (+17.9%) but not faring quite as well as the S&P 500 (+22.6%). 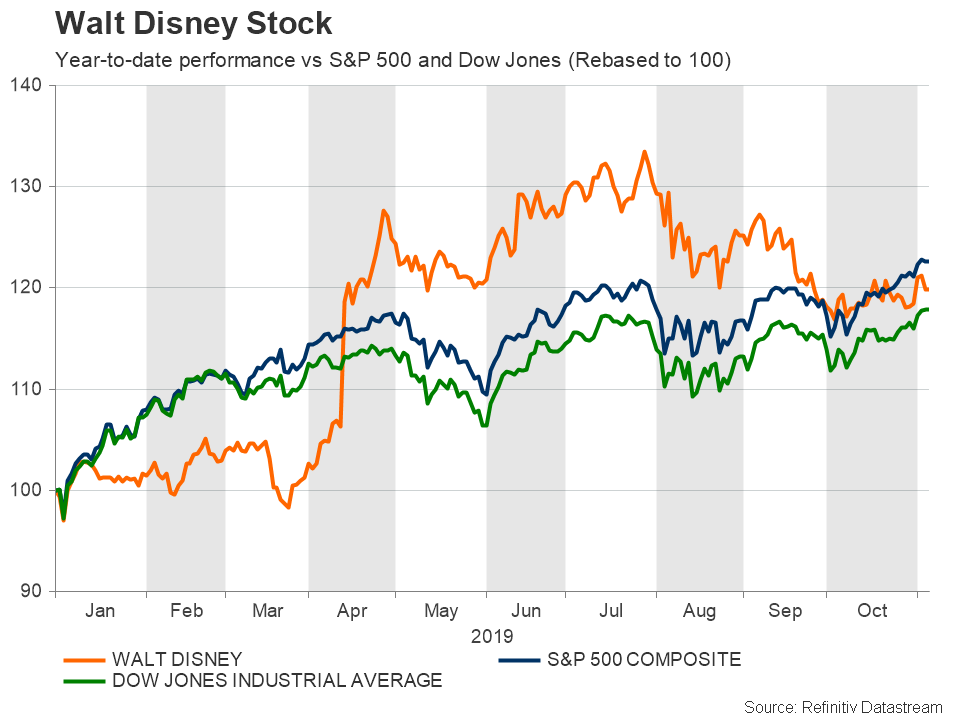 Should the earnings results show strong initial interest for Disney+ and that the recent acquisitions are bearing fruit, the share price could make a jump towards the 23.6% Fibonacci retracement of the March – July upleg at $137.74. A break above this level could set the stage for a challenge of the all-time peak of $147.15 set on July 29.

However, if the Company’s guidance fails to excite traders and raises doubts about future revenue prospects, the stock could retreat back down to its 200-day moving average, currently at $129.30. Below this level lies another key support – the 50% Fibonacci at $127.21. A drop below this mark could see the sell-off extend towards the $120 level, which was a strong resistance area in late 2018.