The world’s leading entertainment conglomerate will unveil its latest earnings results on Thursday after the market close. Disney’s theme parks are still mostly shut but the company has adapted well, strategically shifting its resources to its booming streaming service. The stock recently hit a new record high, but whether the gains are sustained will depend mostly on the subscriber growth numbers.

Streaming is the way

It is not every day that a company is expected to post quarterly losses but its stock still powers to fresh record highs. Yet this is the case with Disney as investors are willing to look past all the damage the pandemic has inflicted on the company’s traditional business model, focusing instead on its new adventures in the streaming arena.

The crisis forced Disney to change its strategic focus. With its popular theme parks still closed or operating at minimal capacity and its theatrical releases kneecapped by cinema closures, management decided to turn the ship towards the direct-to-consumer business.

The new streaming service, Disney+, has been in existence for a little over a year but has already attracted a stunning 86.8 million paid subscribers as of early December. The rapid growth has allowed Disney to emerge from the ashes as a leading player in the streaming wars, quickly catching up to juggernauts like Netflix, which took several more years to attract that many subscribers. 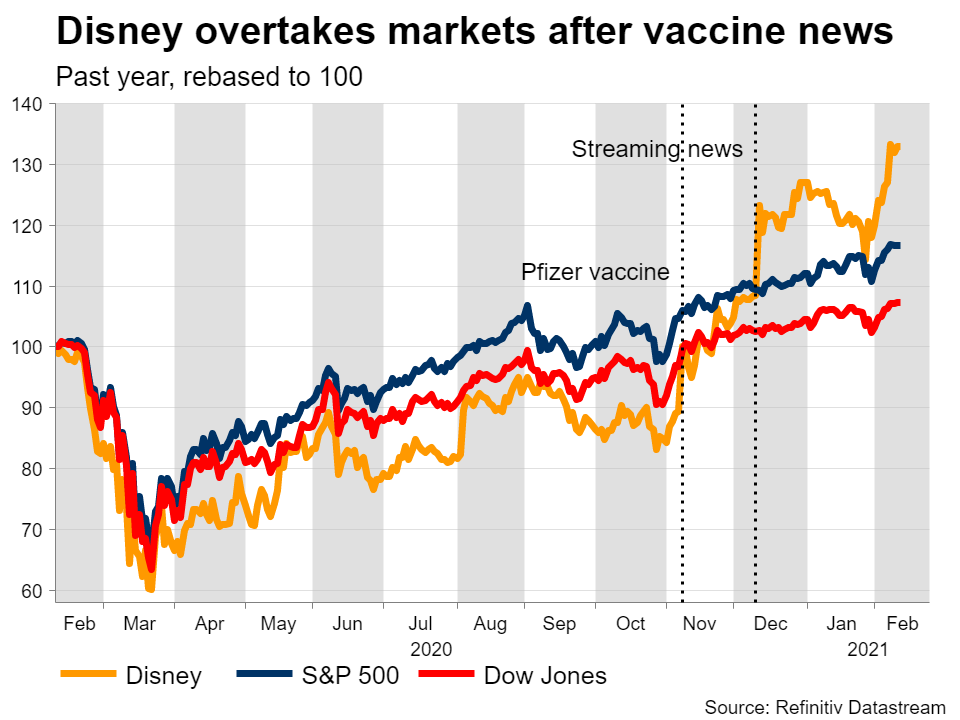 In essence, Disney has stopped trading like an ‘old economy’ stock. It has been repriced almost like a technology stock, thanks to the massive growth potential in the streaming space.

For the quarter that ended in December, the entertainment powerhouse is projected to report a loss of $0.41 per share, on revenue of $15.9 billion. This would represent a drop of 23.6% in sales from the same quarter last year.

That said, most of the market reaction will likely come down to the Disney+ subscribers. If the media empire announces another healthy increase for December and the management team is optimistic about this rapid rate of growth continuing, investors are likely to look past the dismal earnings.

Valuation is pricey, can Disney execute?

Turning to valuation, the stock has become quite ‘expensive’ lately. Let’s have a look at a simple valuation metric, the forward 12-month price-to-earnings ratio. This number denotes the dollar amount someone would need to invest to receive back one dollar in annual earnings, so the higher it is, the more ‘expensive’ a stock is considered. 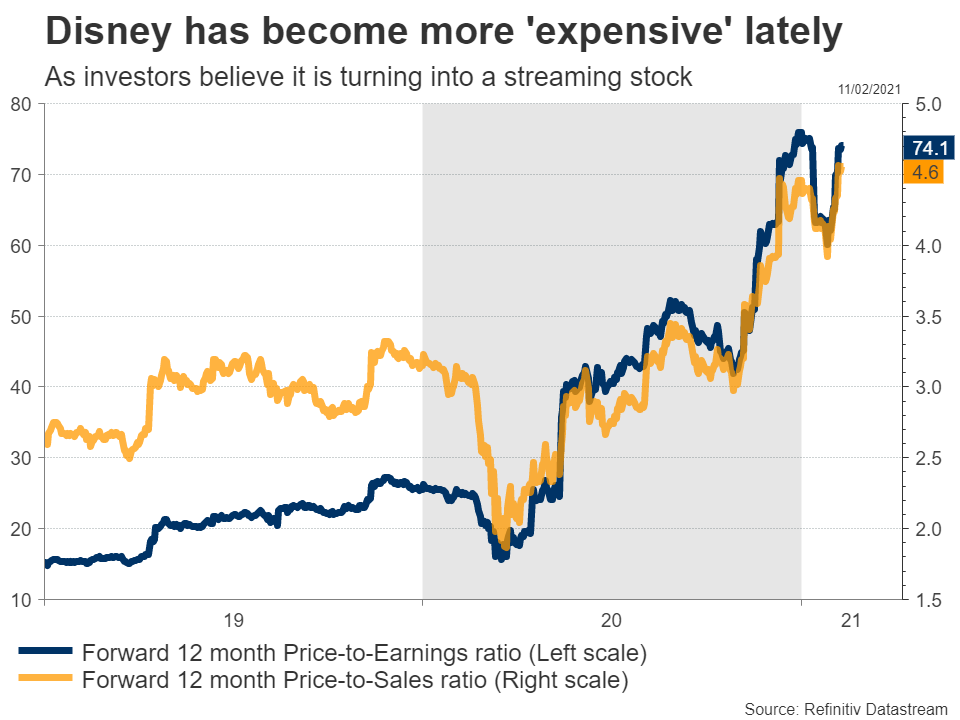 Disney’s currently stands at 74.1x, which is more than double the average for the broader ‘consumer cyclicals’ group. The forward price-to-sales ratio rests at an elevated 4.6x as well.

To be fair, part of this ‘pricey’ valuation comes down to profits not being expected to recover much over the next year, but recover powerfully afterward. The other part is the optimism for the streaming service, which is still in its infancy.

One of the biggest criticisms against Disney has been that while its streaming service is rich in titles the company already owns – from Marvel to Star Wars to Pixar – it lacks fresh content. This issue was addressed a few weeks ago when the company told investors it will be investing heavily in original content to unleash a firestorm of new series in the coming years.

All told, Disney has shown admirable resilience this past year, recognizing the various risks and transforming its entire business model quickly. Results over the next few quarters will likely remain dismal until theme parks are opened fully and Disney+ fires up, but the long-term picture for the business seems favorable.

The main downside risk relates to valuation. Much of the good news seems priced in already, which implies that anything less than stellar execution in the transition towards streaming could spark a deep correction in the stock. The bar is high.

Taking a technical look at Disney, stronger-than-expected results could see the stock climb past the all-time high of 190.7 and perhaps aim for the 197 zone, which is the 161.8% Fibonacci extension of the January retreat.

If earnings disappoint, initial support may be found near the previous record high of 183.5, a downside break of which would turn the focus towards the 170 handle.