The world’s leading entertainment conglomerate will release its latest earnings report on Tuesday, after Wall Street’s closing bell. Beyond any surprises in the numbers, market focus will fall mainly on the expectations by Disney’s management about the firm’s soon-to-be-launched streaming service. Overall, the company’s future remains bright – something also reflected by the 29% gain in its stock this year – though its high valuation poses a risk.

The entertainment colossus is expected to report earnings per share (EPS) of $1.75 for its fiscal third quarter according to Thomson Reuters estimates, which if met, would represent a drop of 6.5% from the same quarter last year. The most pessimistic analyst submitting their forecast projects $1.62, while the most optimistic one anticipates $1.94.

On a more positive note, revenues are expected to have soared by 41% from the year-ago quarter, something especially impressive for a company of Disney’s size. Most of this growth likely came from the company’s studio entertainment segment, after its “Avengers: Endgame” broke the box office record to become the highest-grossing film of all time.

Similarly, investors will keep a close eye on the performance of Twenty-First Century Fox, which Disney acquired back in March.

The firm’s shares skyrocketed back in April following the unveiling of its subscription-based streaming service, Disney+, which is set to go live in November and will compete with the major players in that industry, such as Netflix, Amazon, and Apple. This topic will surely attract attention during the conference call between Disney’s management and analysts after the earnings release, and the expectations of executives for this segment may be crucial for the stock’s overall direction.

Another subject that might come up is whether Disney is indeed considering entering the game publishing sector soon, amid rumors that its next acquisition target could be Activision Blizzard. The game-maker has faced trouble lately, so such a merger could make sense if Disney wants to diversify its massive footprint even further.

Beyond these, Disney’s Parks, Experiences and Products business will also be in the spotlight. This segment still generates most of the company’s sales, accounting for roughly 40% of total revenue.

Perhaps as a testament to how bright investors believe Disney’s future is, the firm’s share is outperforming the broader market this year, having gained a whopping 29.4%. For comparison, the benchmark S&P 500 is up by 17.8% while the Dow Jones is higher by 14.0%. Disney is a constituent stock in both indices.

But valuation becoming a worry 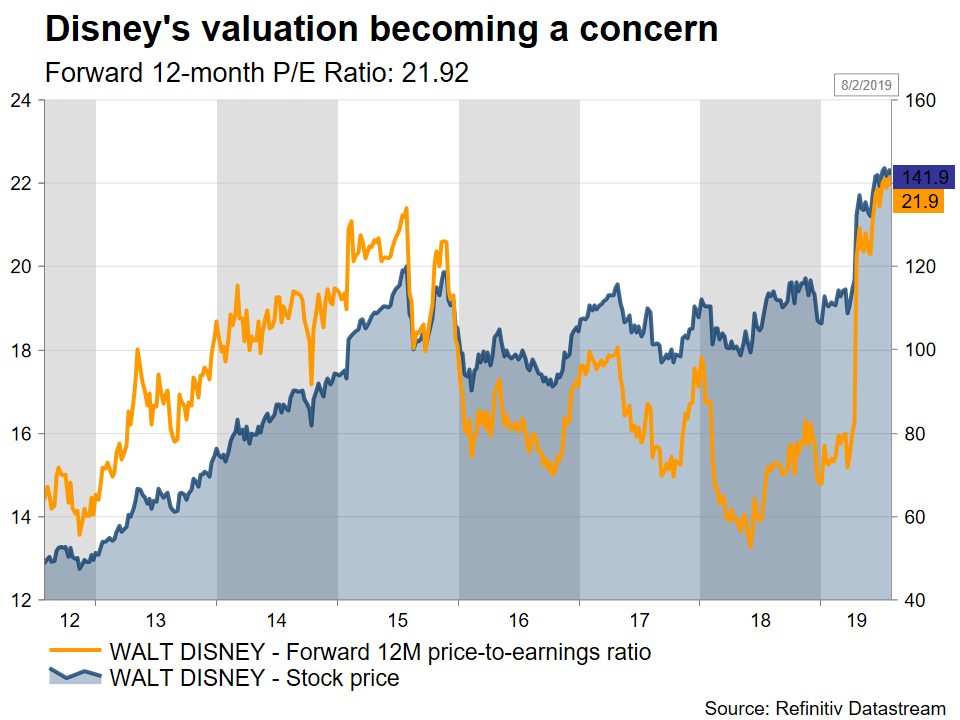 The fact that the recent stock gains haven’t been accompanied by rising earnings though, means that Disney has become more ‘expensive’ from a valuation viewpoint. Let’s have a look at the most usual valuation metric, the 12-month forward price-to-earnings (P/E) ratio. This number indicates the dollar amount somebody would need to invest in order to receive back one dollar of earnings and therefore the higher it is, the more ‘expensive’ a stock is considered.

Disney’s currently stands at 21.9, which is relatively high by historical standards. This could be an indication of an overvalued stock, or a signal that investors expect Disney to grow so rapidly in the coming years that they are willing to hold its stock for a lower return – or a combination of the two. While the firm’s rapidly growing top line is an indication of a bright future overall, the elevated valuation increases the risk of a sharp corrective pullback in the near term, in case of any bad news.

Disney’s stock touched a new all-time high of 147.15 in late July, and while it has since retreated, the price structure on the daily chart still consists of higher highs and higher lows, keeping the overall outlook positive.

If the latest pullback continues, initial support may be found near the 139.70 area, where the 50-day simple moving average is also located.