The minutes of the latest European Central Bank (ECB) meeting are due at 12:30 GMT on Thursday. Investors will look for any details about the central bank’s framework review, and specifically, about whether the inflation target may be changed. ECB President Lagarde will speak a few hours later, at 18:00 GMT. As for the euro, the outlook still looks bleak, with economic growth barely positive and the risk of an escalation in US-EU trade tensions looming.

The euro area closed 2019 on a more positive note, as markets focused on signs that the weakness that tormented the economy was starting to abate. This optimism was grounded mainly on the ceasefire in the US-China trade war and the perception that Brexit risks were fading, which helped allay some uncertainty around exports and investment.

Alas, markets seem to be focusing entirely on the positives. Yes, the latest PMI surveys do suggest that growth is finally stabilizing, but they also caution it is doing so at an extremely low level, so there isn’t much to celebrate either. Meanwhile, the manufacturing sector is still in dire straits and there’s a real risk the situation gets even worse, as the US – having reached a trade truce with China – might now turn its sights to Europe.

Separately, while Brexit risks have moved out of the spotlight for now, that may not stay the case for very long. As we approach the middle of the year, PM Johnson might revert to threatening a no-deal exit again to extract concessions in the negotiations, thereby refueling uncertainty.

Faced with external risks and slowing growth, the ECB relaunched its Quantitative Easing (QE) program back in September to stimulate the ailing euro area. Yet, that was done reluctantly, with policymakers representing the biggest economies – Germany and France – opposing the decision. That laid bare the divide within the ECB between the doves and the hawks. 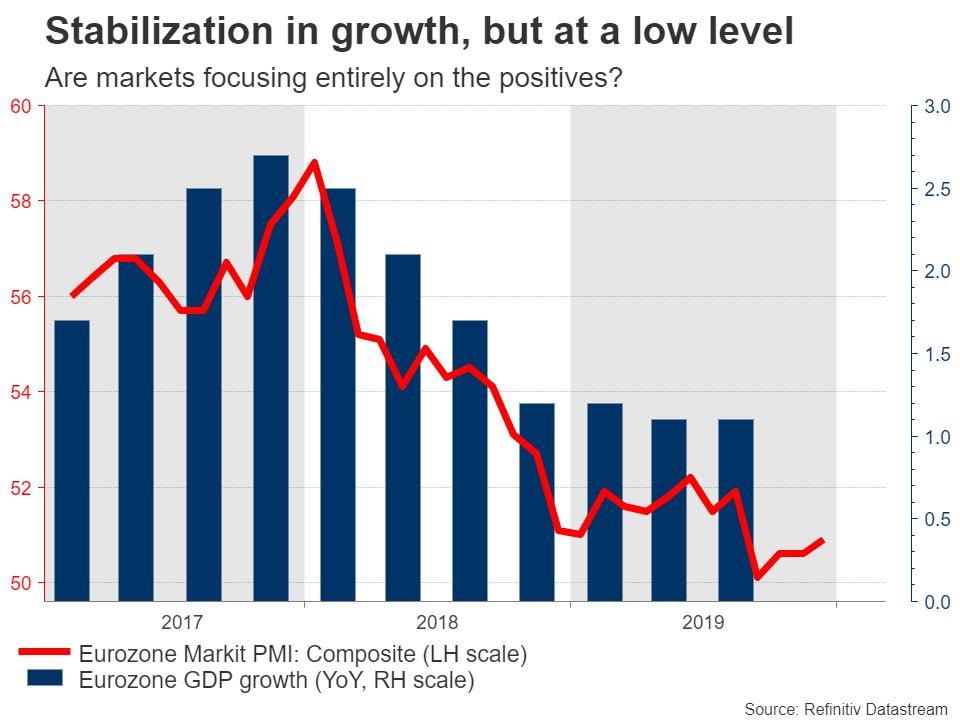 Turning to this week’s minutes, since nothing much happened back at the December meeting, markets will probably focus on any details around the strategic framework review that the central bank announced.

Specifically, investors will look for any conversation about amending the inflation target. The ECB’s current mandate is keeping inflation “below, but close to, 2%” and the ongoing debate is whether this should be changed. For example, it might be altered to a target range of 1.5% – 2.5%, granting the ECB the flexibility of not acting very aggressively even when inflation is lower than 2%. This would likely be an option favored by the hawks.

On the other hand, the doves might argue dropping the “below, but close to” part and just moving to a simple 2% target. The implication would be that the ECB would have to keep rates low for longer to achieve the higher goal, so if the minutes show support for such a change, the euro might spike lower on the news.

Waiting in the rain for fiscal stimulus

What’s most worrisome is that European monetary policy is already near its limits after several years of heavy money printing, so even if the ECB does more – like bigger QE injections – that might not do much to boost the real economy.

Instead, what’s needed is a large fiscal spending package, but the only major country with any fiscal room is Germany, and Berlin has been clear it has no intention of doing so.

Until – and if – there are signs that such a package is on the way, it’s difficult to envision a significant and sustained recovery in the euro. From this lens, any future rally in euro/dollar may be more likely to come from dollar weakness if the Fed starts cutting rates again for example, not from euro strength.

Taking a technical look at euro/dollar, initial support to declines might come from the 1.1090 zone, where the 50-day simple moving average (SMA) is also located.

On the upside, the first barrier for the bulls may be the 1.1145 area, where an upside break could open the door for the 1.1195 region.