It will be a packed week for the British pound. The UK employment report will be published on Tuesday at 06:00 GMT, while on Wednesday and Friday investors will pay attention to CPI inflation (06:00 GMT) and monthly retail sales (06:00 GMT) respectively to get more evidence on the economy. The Bank of England (BoE) is becoming increasingly conservative, and if the releases can buck this trend, the pound could appreciate, but only modestly.UK CPI inflation to print new highs

Despite the fact that the issue of high cost of living is a worldwide occurrence, it is possible that Britons will end up having it worse than anybody else.

Last week, Kristin Forbes, who had previously served on the Monetary Policy Committee of the Bank of England, issued a stern warning, stating that "there are approximately six elements that feed through into inflation, and the UK ticks every box."

Higher energy prices, disruptions in supply chains, and lingering effects of the pandemic are making life difficult for people in most of the world's nations. On the other hand, it is anticipated that price pressures would be more severe and endure for a longer period in the UK.

The UK is going to be hit with a particularly poisonous mix of these pricing drivers. In addition, the country is increasing taxes on households, which is something that very few other governments are willing to do during a period of rising living expenses.

The inflation rate has already increased to 7%, the highest since March 1992, but economists anticipate that the pressures will become even more severe and will continue to be elevated in the UK for a longer period.

The Bank of England's most recent set of pessimistic projections predicted that the rate of inflation will hit double digits by the end of the year; levels that hadn't been seen in almost four decades. The figures for April are anticipated to show that inflation jumped to 9.1%. 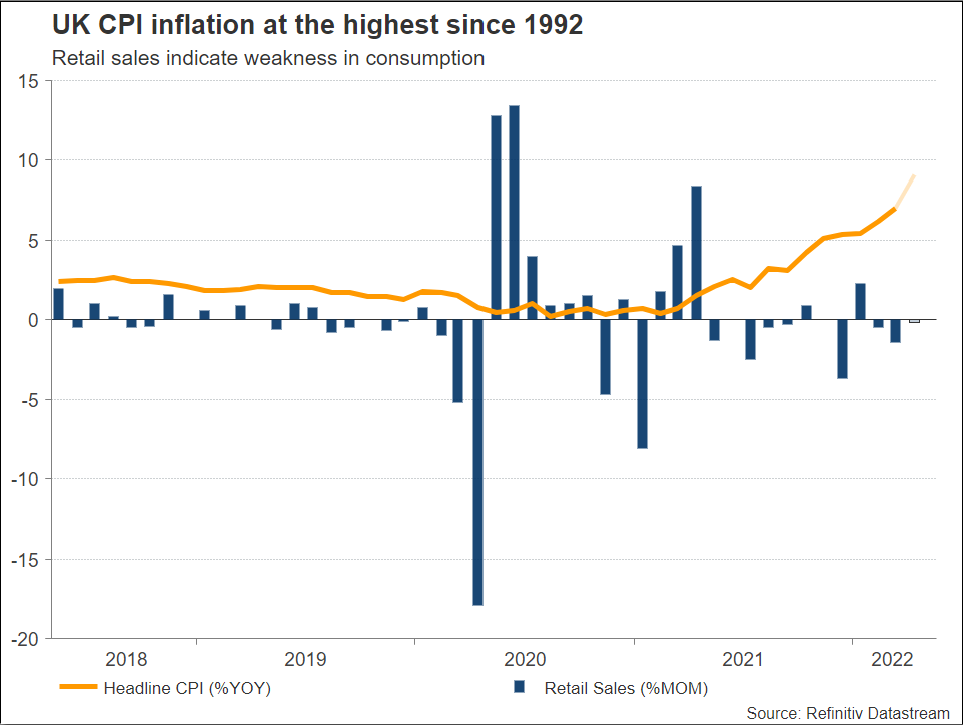 The unemployment rate for March is predicted to remain steady at 3.8% as before, which was the lowest it had been since the end of 2019. Up until the start of the coronavirus pandemic in December 2019 to February 2020, the unemployment rate had been going down since late 2013. Since then, it has gone up, but now it is back to where it was before the coronavirus pandemic.

After a 1.4% decrease in March, retail sales in the UK are forecasted to fall 0.2% in April on Friday. Affordability is beginning to weigh on consumers, who are spending less than the rise in prices. Non-store retailing had the biggest negative impact.

Since wages have been failing to keep pace with inflation, and now there are hints that hiring may be slowing as well, the April retail sales report should reflect the extent of the stress on consumers.

BoE made four rate hikes in May; tensions with Brussels and Northern Ireland remain

During its May meeting, the Bank of England made its fourth straight rate hike, which drove borrowing costs to their highest level since early 2009. Only three members voted for a 50bps rise. Following Russia's invasion of Ukraine, inflationary pressures have risen dramatically around the world, resulting in a significant deterioration in the UK's economic prospects. Household incomes in the UK are likely to fall by about 1% in Q2 and by 1% in Q4 as a result of the slowdown in the economy, according to the latest estimates.

The rise in tensions amongst London and Brussels over Northern Ireland is another factor that is making life difficult for sterling. The government of the United Kingdom is dissatisfied with the lack of progress in the discussions aimed at upgrading the Northern Ireland protocol, and it has threatened to abandon the border checks that are needed by the Brexit treaty over the Irish Sea. If the UK takes action without consulting the EU, there is a chance that the EU may punish them by delaying the Brexit trade deal.

Turning to pound/dollar, the pair geared above the two-year low of 1.2150 today, opening with a negative gap. The next resistance could pop up around 1.2410 and then probably near the 20-day simple moving average (SMA) currently at 1.2530 and the 1.2670 mark. A positive surprise in the data, and overall, a brighter outlook for the UK economy, may helping the pound to reach those levels and even drift higher.

Alternatively, disappointing data releases could pressure the pair towards the two-year low of 1.2150 ahead of a plunge towards 1.2070, taken from the lows on May 2020. More downside pressures could open the way for steeper decreases until the trough of 1.1410, registered in March 2020. 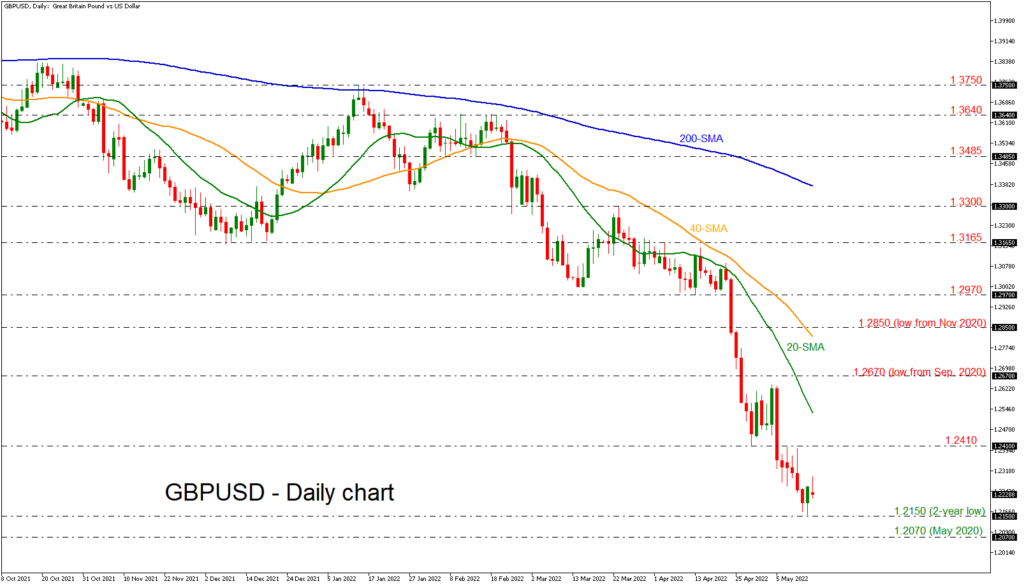 To continue reading this article in full, log in to your Members Area