The Bank of Canada is the only G7 central bank to deliver a whole percentage-point rate increase in this post-pandemic hike race, and it did so just at its latest gathering, in July. However, the aftermath revealed another month of job losses for Canada, and with that in mind, market participants may keep a close eye on the CPIs today, due out at 12:30 GMT, as they try to figure out how the Bank is likely to move forward with this tightening cycle.Language and projections accompanying the BoC’s July hike

When it last met, the BoC decided to raise its main interest rate by 100bps to 2.50%, its biggest increase since 1998, signaling that more rate hikes were on the way. The Bank forecast inflation to remain at around 8% YoY during the end of this quarter, and to finish the year at 7.5% YoY, while seeing a strong slowdown to 3.2% in Q4 2023, and eventually touching its target in 2024. It also cut its economic growth forecasts, dragging the YoY rates of this year and the next down to 2.6% and 1.8%, from 3.8% and 2.9% respectively.

Having said that though, officials noted that the slower growth is “largely due to the impact of high inflation and tighter financial conditions on consumption and household spending,” which justifies their view with regards to taking rates higher to tame extremely high inflation.

What does market pricing suggest for the next gathering?

Since then, data showed that inflation continued to accelerate in June, to 8.1% YoY from 7.7%, but also that the economy lost jobs for the second consecutive month in July, despite the unemployment rate staying at a record low of 4.9%. 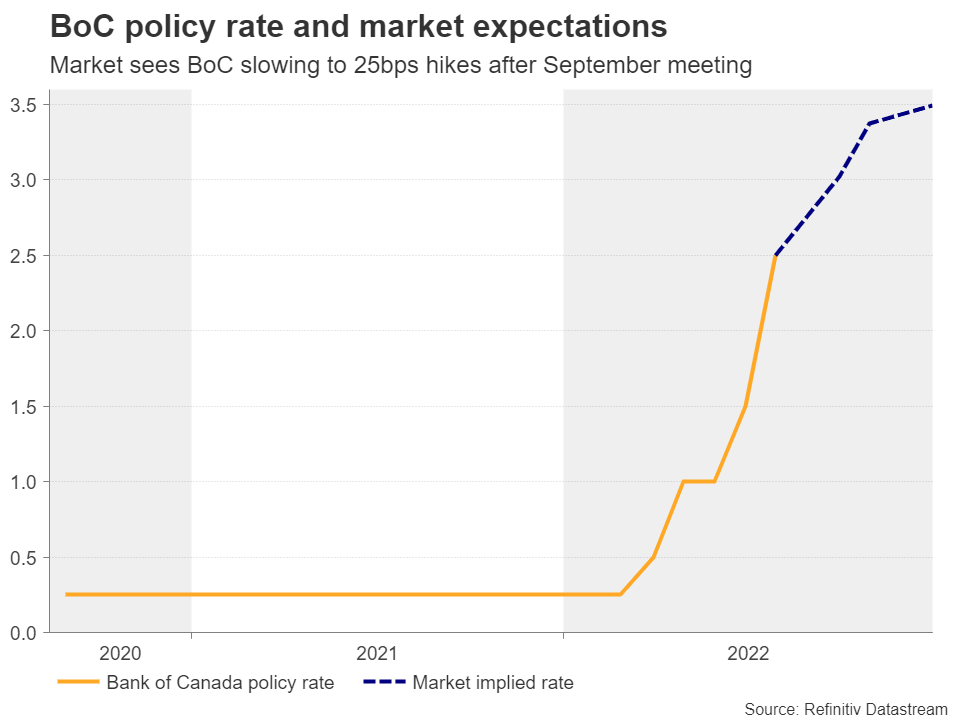 Although the former may have encouraged some to bet on another bold move at the September gathering, perhaps a 75bps rate increase, the labor-market data gave them second thoughts. Indeed, market participants are now assigning only a 10% chance for a 75bps hike, while the remaining 90% is for 50bps. As for the rest of the year, the implied rate points to 50bps higher, which means a quarter-point increase at each of the October and December meetings.

Inflation to slow, but how much can it impact the loonie?

As for today’s data, the forecast for the headline rate points to a slowdown to 7.6% YoY from 8.1%, something that could add credence to the view for slower hikes moving forward. There is no consensus neither for the core rate nor for the trimmed-mean and median ones. That said, with the market already expecting the BoC to shift back to a half-point hike, and even smaller increases thereafter, the Canadian dollar may not feel much heat.

For the loonie to come under selling interest, the inflation rate may need to miss its own forecast, which could raise speculation over a quicker slowdown in consumer prices, and thereby smaller rate increases by the BoC at the upcoming meetings. It may even prompt some participants to shift their bets for the upcoming gathering to a 25bps increase. A miss in today’s data could result in an extension of yesterday’s rally in dollar/loonie, and perhaps a break above the 1.2985 barrier, marked by the high of August 5. Such a break could carry larger bullish implications, perhaps sending the pair to the peak of July 14, at 1.3225.

Alternatively, for loonie traders to get excited and start adding long positions, inflation may need to come in higher than the consensus. This could solidify the notion for a double hike at the BoC’s upcoming gathering, and if we do get further acceleration, bets over a triple hike may increase. Dollar/loonie may slide to the upside support line drawn from the April 5 low, or near the 1.2730 zone, marked as a support by the low of August 11. That said, the move signaling that the bears have taken full control may be a dip below that key territory. Such a break may unlock and open the door for declines towards the low of June 8, at 1.2515.