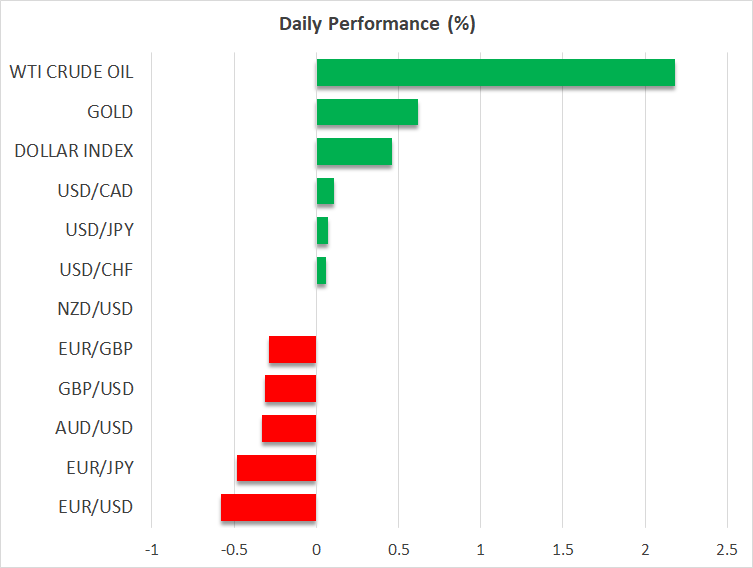 The US dollar extended its gains on Wednesday, while stocks stayed largely in the red as investors weighed the risks from the Fed’s upcoming policy decision as well as the possible impact from Russia’s latest warmongering, which is adding to the uncertainty.

The Fed is on course to deliver the third three-quarter point rate hike in a row when it announces its decision at 18:00 GMT but some investors are betting on a full percentage point increase. The odds for a 100-bps increment have been hovering around 20% over the last week, suggesting there is scope for disappointment should policymakers stick to the consensus.

Nevertheless, the real spotlight today and what will likely determine the direction of the market’s response is the updated dot plot. The Fed’s expected terminal rate jumped to just below 4.50% following the CPI surprise and Powell’s very hawkish Jackson Hole speech.

FOMC members’ own projections will likely be aligned with the market’s but where the forecasts could diverge is how long rates will stay around 4.50%. The Fed will publish for the first time its predictions for 2025 and if policymakers see the Fed funds rate not coming down substantially by then or even holding near the peak, that could push Treasury yields even higher, hurting equities.

America’s benchmark 10-year Treasury yield surged to a more than decade-high of 3.60% on Wednesday, dragging on Wall Street.

The S&P 500 closed more than 1% lower at a two-month low, though e-mini futures for all the three main indices were last trading flat.

Putin’s threats upset the euro, not so much equities

In Europe, the main bourses were reversing a sharp dip at the open as fears of a major escalation in the Russia-Ukraine conflict subsided slightly during the course of the session. Russian President Vladimir Putin on Wednesday declared partial mobilization of the country’s military in a sign that he wants to bolster troops in Ukraine following the recent gains made by Ukrainian forces in recapturing occupied territories.

Amongst the other measures announced by Putin are plans to hold referendums in the Russian occupied regions on whether they should be annexed to Russia.

Apart from signalling that Putin has no intention of pulling back from Ukraine, his latest actions raise the prospect of Russia using nuclear weapons to defend what it considers its territory.

The euro was the worst hit from the worrying headlines, briefly tumbling to a two-week low below $0.99 before recovering slightly. Although there is certainly a high risk that sentiment could easily deteriorate further in the coming sessions, the quick partial rebound indicates that for now at least, investors aren’t extremely concerned about the situation exploding into something a lot bigger. More hawkish rhetoric from the ECB is likely helping too.

In other currencies, the risk-sensitive antipodean currencies brushed fresh two-year lows versus their US counterpart but were a little steadier into the European session. The Australian and New Zealand dollars have been under pressure lately as local yields have not been able to keep up with the gains made by US and European yields.

However, yields were down across the board today on the back of the heightened geopolitical tensions as safe havens outperformed despite the somewhat restrained panic. Gold rose to around $1,670/oz, but this was within its recent sideways range.

The Japanese yen firmed against most of its major peers apart from the greenback and Swiss franc, with the euro again being the biggest loser, while the dollar index scaled the highest in two decades.

Most likely, investors are holding off from significantly adjusting their positions prior to the outcome of the Fed’s meeting, which will be followed by decisions by the Bank of Japan, Bank of England and Swiss National Bank tomorrow. So unless there are any fresh developments in Ukraine, geopolitics will probably play second fiddle to Fed policy.