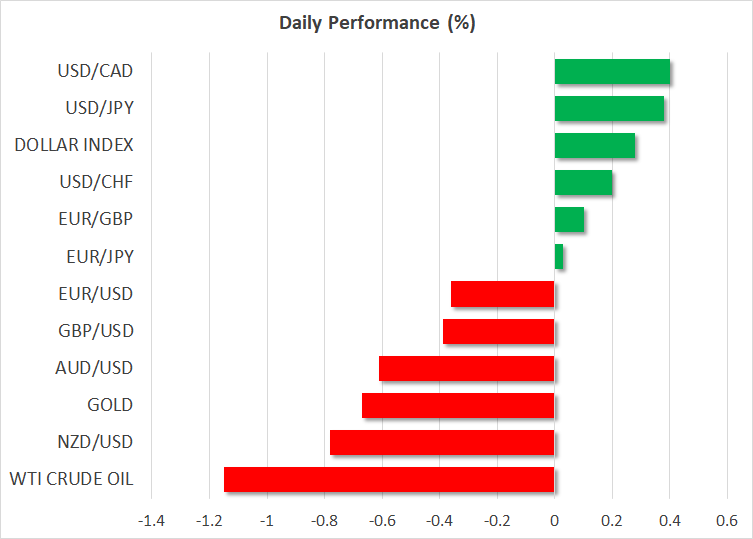 Trading got off to a cautious start on Monday, with equities still reeling from last week’s brutal selloff, while the US dollar kept advancing on the anticipation that the Federal Reserve will stick to its hawkish rate path when it sets policy on Wednesday. Bank holidays in Japan and Britain contributed to the muted tone as it meant there was no trading in US Treasuries until Wall Street opened.

The yield on 10-year Treasury notes came close to surpassing the decade high of 3.498% set in June on Friday as bets that the Fed would lift its key policy rate by a full percentage point jumped to around 20% following last week’s hotter-than-expected inflation report. The data dashed hopes that the Fed could soon soften its hawkish rhetoric. But with traders now fully pricing in a rate increase of 75 basis points, it will be difficult for Jay Powell to up the ante on fighting inflation even more.

Yet, there is still a danger of another reality check for investors if FOMC members predict a higher terminal rate than the 4.45% that’s priced into futures markets ahead of the meeting.

The dollar index clawed back above the 110 level on Monday as fears that central bank rate hikes could trigger a worldwide recession weighed on all the other majors.

The Bank of England and Swiss National Bank are also expected to raise interest rates this week, a day after the Fed. Markets are split between a 50- and 75-bps hike for the BoE and between 75- and 100-bps for the SNB.

For sterling, however, Friday’s emergency budget by Britain’s new government might be more important as investor confidence in UK assets has been collapsing on worries about the deteriorating growth and debt outlooks. The pound plummeted to a 37-year low of $1.1348 on Friday following a worse-than-expected slump in retail sales and was barely trading off those lows today.

The yen has been a little steadier, though, after warnings of FX intervention by Japanese officials grew louder last week. That has prompted the dollar to back away from the 145-yen level for now, but it might not hold for too long if the Bank of Japan maintains its ultra-loose policy stance at its meeting on Thursday and the only tweak is the language on the exchange rate.

The euro was also on the back foot, slipping below parity again as Eurozone recession risks remained heightened.

On Wall Street, the nearly week-long bearish bias remained intact as US futures pointed to further losses for the S&P 500, which lost 4.8% last week. Sentiment is unlikely to improve before Wednesday, but the somewhat oversold conditions could make way for a small relief rally if Powell offers the slightest hope that the pace of tightening could move into lower gear soon.

Markets are becoming increasingly jittery about central banks’ unconditional pledge to bring inflation under control no matter the cost. Some encouraging trends in the University of Michigan’s consumer inflation expectations survey on Friday and a cut in China’s 14-day reverse repo rate failed to provide much of a boost, with European and Asian stocks all in the red today.

Oil prices were headed lower too despite supply concerns, which were offset by the weakening outlook for demand. Meanwhile, the stronger dollar was a drag on gold, which slid to around $1,665/oz. The precious metal managed to bounce back from a 29-month low on Friday but the greenback’s fresh advance has cut the rebound short.