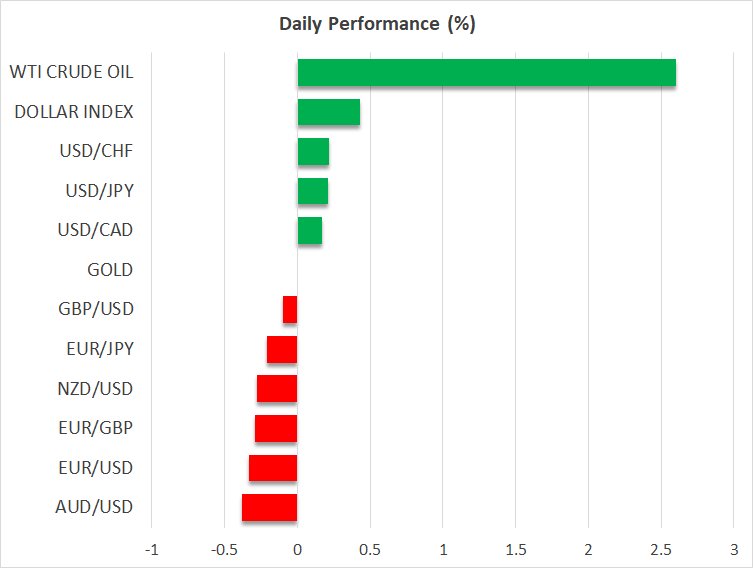 The euro slid below the $0.99 mark on Monday, brushing its lowest point against the US dollar since December 2002, as fears of energy shortages intensified after Russia’s Gazprom said it will cut gas supplies via the Nord Stream pipeline indefinitely. Flows of natural gas through the pipeline were due to be resumed on Saturday following an unscheduled maintenance, but citing an oil leakage at one of the turbines, Gazprom has now postponed its reopening, effectively cutting off direct supplies to Germany.

The move is likely in response to a decision by G7 finance ministers on Friday to impose a cap on the price of Russian crude oil. Even though there’s a huge amount of scepticism about how such a cap can be successfully enforced, Russia has nevertheless taken this opportunity to apply further pressure on its European neighbours, sparking the prospect of a bleak winter on the continent.

After a significant pullback last week, European gas futures have surged by more than 25% today, threatening to push up electricity prices to new records in countries such as Germany that are greatly reliant on natural gas as a source of energy.

The deepening crisis is probably the last thing the European Central Bank was hoping for as it meets this week to ponder the size of its second straight expected rate hike. Market pundits are betting that policymakers will opt for a 75-basis-point hike on Thursday. However, even if the ECB were to go ahead with a super-sized rate increase, it’s unlikely to bolster the euro significantly when the growth outlook is so grim right now.

Pound stuck in a rut as new PM announcement awaited

The economic picture in the UK is also worrying investors, as reflected by sterling’s rapid depreciation in August. September is not looking to be any kinder and the pound has fallen to a new two-year trough on Monday, hitting an intra-day low of $1.1441. Although Britain is unlikely to face energy rationing on the same scale as the worst-hit European countries in the worst-case scenario, its twin deficits make sterling as much, if not more vulnerable to the energy crunch as the euro.

Another factor for the pound’s underperformance is the fact that the UK has had a zombie government for half the summer as the Conservative party elected a new leader, leaving outgoing prime minister Boris Johnson unable to tackle the cost of living crisis. But the wait is finally over today as the Tories will announce who won the contest to be the next party leader, and in effect, the next UK prime minister, at 11:30 GMT.

Foreign Secretary Liz Truss is expected to beat former chancellor Rishi Sunak and has pledged to set out a plan to deal with the crisis within a week, although it remains to be seen whether investors will be impressed. Meanwhile, the European Union is discussing what measures it can take to ease the toll of soaring energy prices on consumers and businesses.

Amidst all the gloom in Europe, the US dollar is thriving, with its index against a basket of currencies scaling a fresh two-decade high. Friday’s jobs report out of the US did not suggest that the Fed’s aggressive tightening is significantly cooling the labour market, leaving the door wide open for another 75-bps rate hike at the September meeting.

The greenback is extending its gains today even as the risk-off mood has dragged the 10-year Treasury yield, which surged on the back of the solid jobs numbers, lower to around 3.20% from highs just below 3.30%.

Stocks, however, were struggling after Wall Street reversed earlier gains on Friday to finish in the red. The US market is closed on Monday for Labor Day but e-mini futures were trading mixed, while European markets opened sharply lower, with Germany’s DAX index down the most.

In commodities, gold held onto Friday’s gains, hovering around $1,710/oz, but oil prices jumped higher, shrugging off the negative tone in the broader market.

OPEC and its non-OPEC allies are due to announce their latest monthly output decision later today. There is some speculation that the cartel might announce a small cut in a symbolic gesture to put a halt to oil’s slide. Given the growing danger of a recession in Europe and a slowdown elsewhere, there is a risk that oil prices could slump again if OPEC+ keeps production at current levels and fails to provide any concrete signals about a potential cut in the future. 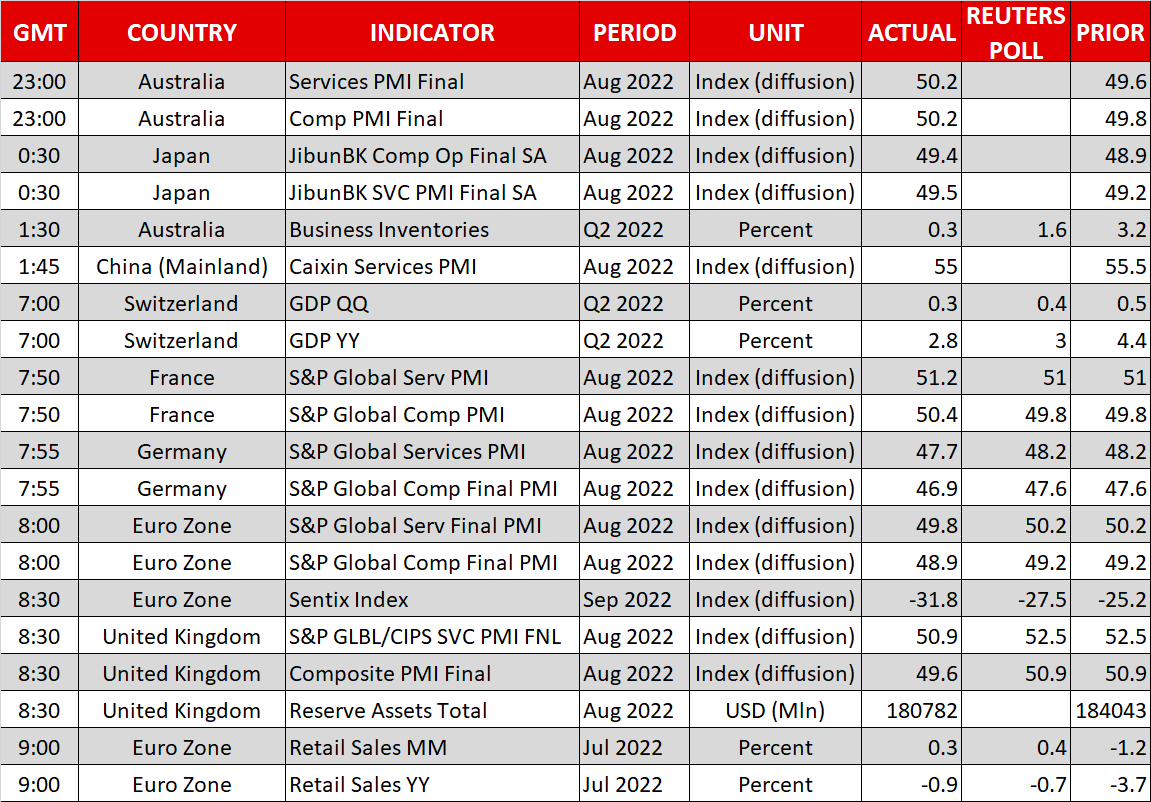