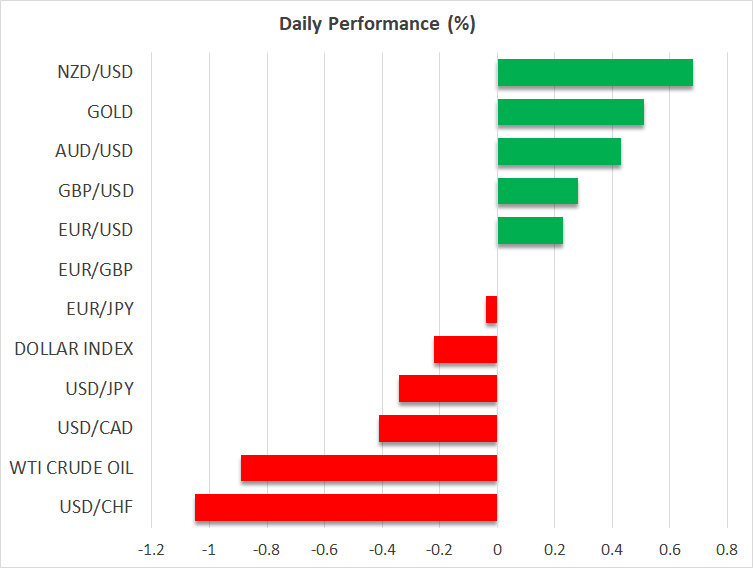 Sellers returned to Wall Street on Wednesday as a big drop in profits by America’s retail behemoths raised the spectre of diminishing margins, in what could only be the start of high inflation eating into corporate earnings. Target was the second US retailer to report a large miss in earnings per share this week, a day after Walmart did the same. Its stock slumped by almost 25% yesterday, pulling the S&P 500 down by 4% - the biggest daily decline since June 2020. The Nasdaq Composite slid 4.7%, while the Dow Jones ended the session 3.6% lower.

With several other retailers yet to report their results, including Kohl’s today, there could be further negative surprises on the way for Wall Street. However, whilst it’s certainly true that many investors are only now coming to terms with the reality that profits will take a substantial hit from soaring input costs, the reason why the sense of panic has become more heightened lately is the fear that supply disruptions and the associated shortages are here to stay.

The war in Ukraine has been dragging on for three months now and doesn’t look like it will end anytime soon, meaning the tough sanctions against Russia will stay in place for the foreseeable future. In addition, the latest lockdowns in China couldn’t have come at a worst time as they’ve exacerbated already strained supply chains.

Stocks down but no chaos

More significantly, central banks have had their hands tied and have no option other than to raise interest rates to try and cool some of the burgeoning inflationary pressures.  Fed Chair Jerome Powell this week gave his clearest indication yet that the Fed will keep hiking rates until inflation has come down.

Nevertheless, the Fed’s base case scenario is still that the front loading of rate increases will likely end in July and policymakers will return to 25-bps increments after that. Comments from Evans and Harker in the last 24 hours have reinforced this expectation and money markets have not budged significantly in recent days.

This may be of some comfort for traders as, although equity markets are sharply in the red today, stocks haven’t gone into complete freefall. US stock futures are pointing to further losses on Thursday of at least 1%. In Asia, the Hang Seng index in Hong Kong took the brunt of the selloff, tumbling 2.5% after Chinese tech firm Tencent warned that Beijing’s pledge to ease up on the crackdowns on the tech sector won’t happen overnight.

However, recession worries remain heightened, keeping a lid on Treasury yields. The US dollar is edging lower today, and the yen is mixed. The theme in the currency markets is slowly turning about the individual risks of recession for each economy.

The pound has quickly become the worst performing currency among the majors this year, as the combination of a tight labour market and skyrocketing energy bills have put the UK economy in greater danger from stagflation. But sterling is recouping some losses today, climbing to around $1.2380.  The euro was also a little firmer, attempting to reclaim the $1.05 handle ahead of the publication of ECB’s meeting minutes at 11:30 GMT, which may flag a quick end to QE and higher rates as strongly hinted by policymakers in recent weeks.

The Australian and New Zealand dollars were the biggest gainers, however, contradicting the risk-off mood in equity markets. The aussie is up despite recession jitters and a smaller-than-expected increase in Australian employment in April.

The relaxation of Covid measures in China might be propping up the aussie as well as the fact that the RBA will probably hike rates aggressively regardless of the slight misses in this week’s labour market stats out of Australia. 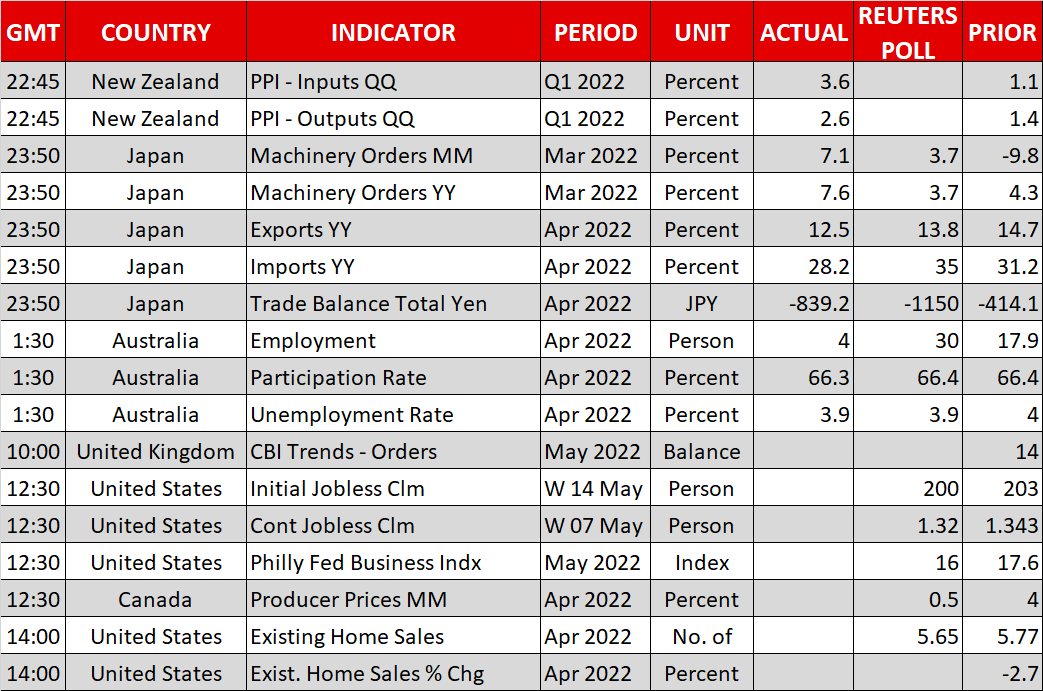