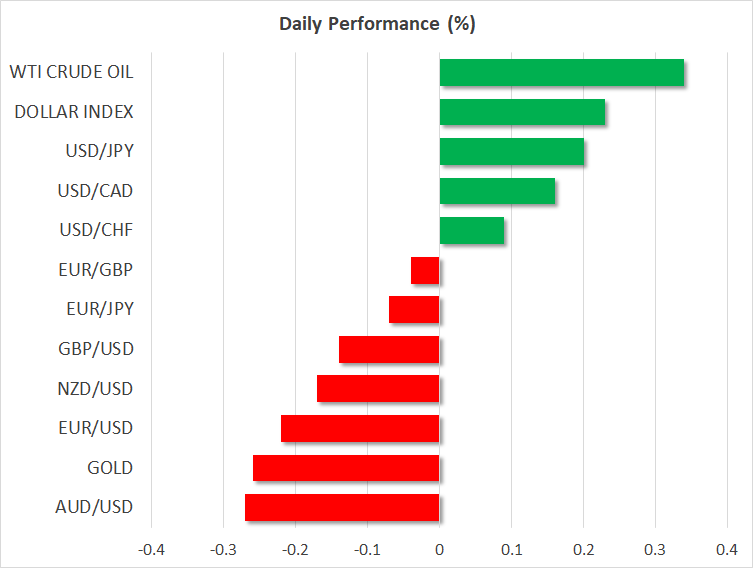 Jobs report to put US economy to the test

Recession jitters were abound on Friday even as markets got off to a steady start following a few wobbles along the week. PMI indicators around the world painted a grim picture for services activity, suggesting major economies were barely growing or were already in contraction. But the ISM equivalent for the United States was in stark contrast, indicating the non-manufacturing sector picked up pace in July.

Today’s payrolls numbers should shed some more light on the health of the world’s largest economy and whether there’s been any alarming deceleration in hiring by corporate America. Consensus forecasts have pencilled in a 250k increase in nonfarm payrolls in July, down from 372k in the prior month. The jobless rate is predicted to have held at 3.6% and a slight moderation is anticipated in wage growth.

An NFP print of around 250k would likely keep the Fed on its current hawkish path. Fed policymakers took to the airwaves this week to strongly push back against market expectations of rate cuts as early as 2023, going out of their way to telegraph that their fight against inflation is far from done.

Despite two jumbo-sized hikes that have lifted the Fed funds rate to a range of 2.25%-2.50%, the FOMC hawks such as Bullard and Mester see the terminal rate nearer 4%. But investors are still not entirely convinced as there’s too many red flags pointing to clear downside risks, one of which is the rise in jobless claims.

Initial claims for unemployment benefits ticked up to 260k last week, maintaining the uptrend that started in March. Any big disappointment in today’s jobs report would likely fuel concerns that the US labour market is cooling a lot faster than anticipated and further stoke recession fears.

Gold and oil go in opposite ways as growth risks mount

Worries that Fed tightening may go too far have already inverted parts of the US yield curve. The spread between 10- and two-year Treasury yields is now at the deepest since 2000. Moreover, US and global bond yields are now headed lower again after spiking mid-week when geopolitical tensions over Taiwan began to subside, and this is what’s likely supporting gold at the moment.

The precious metal is eyeing the $1,800/oz level after bouncing off its July low of $1,680. But it remains to be seen if declining yields and lingering recession angst will be enough to propel gold above this key level.

In the meantime, the deteriorating outlook is inflicting heavy losses on crude oil even as supply remains very tight. WTI and Brent crude futures plunged for the third time this week on Thursday, hitting levels last seen before the Russia-Ukraine conflict. Although both contracts were steadier on Friday and slightly up on the day.

Stocks on standby for NFP data

Stocks were struggling for direction, however, on Friday, as fewer big names are scheduled to report their earnings and investors are hoping to get better clarity on the strength of the US labour market before deciding whether or not to continue with the recent buying spree.

Wall Street ended Thursday mixed and e-mini futures were similarly directionless today. Still, both the S&P 500 and Nasdaq are on track for another weekly gain. There was little reaction to the new Inflation Reduction Act agreed by Senate Democrats that includes a proposed excise tax on stock buybacks. Buybacks have been a major factor in boosting the rallies on the stock market in recent years so the muted response is a little surprising.

Dollar edges up after jolts in euro and pound

The US dollar advanced modestly against a basket of currencies, while the yen was a little firmer. The euro, which unexpectedly popped higher yesterday, fell back marginally to around $1.0230 and the pound was weaker against the dollar too.

Sterling came under pressure on Thursday after the Bank of England hiked rates by the most since 1995 but predicted that the UK economy would enter a year-long recession in the fourth quarter. There was also disappointment that the BoE’s plan for the active sale of gilts wasn’t as aggressive as had been expected and may yet be tweaked or abandoned if the economic situation worsens by September when it will be put to a vote.

But some investors questioned if the BoE’s forecasts were a bit too gloomy and the pound recovered back above $1.21.