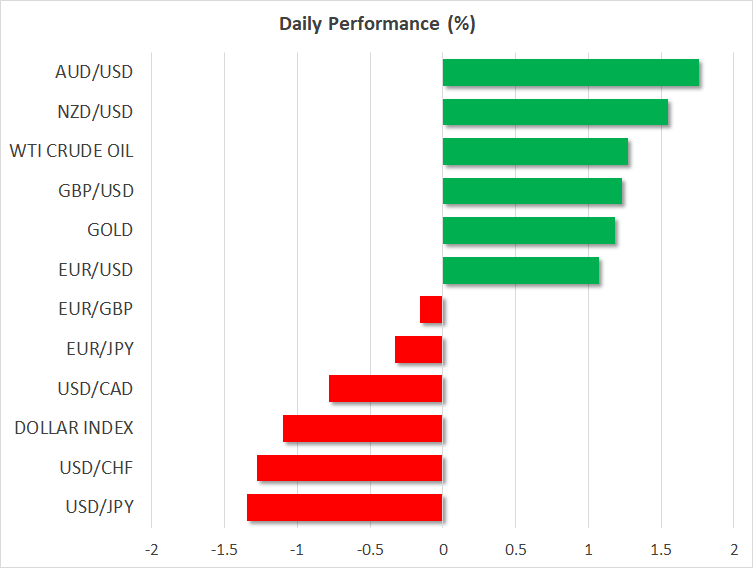 The Japanese yen rallied against the US dollar on Friday after Bank of Japan Governor Haruhiko Kuroda joined in the chorus of alarm voiced by senior officials from the country’s finance ministry about the currency’s rapid depreciation. Following a meeting with the prime minister earlier today, Kuroda told reporters that “sharp currency moves are undesirable”, adding that the Bank will be watching exchange rate moves carefully.

Whilst that may not necessarily imply that the BoJ is any closer to abandoning its ultra-accommodative monetary policy stance, the warnings from the government are getting louder and suggest FX intervention could be on the cards if the yen maintains its current pace of decline.

The dollar skidded by more than 1% after the overnight comments, hitting a low of 142.13 yen from higher just above 144.0.

The closer the yen gets to the 1998 trough of 147.63 to the dollar, the more nervous investors are likely to become about currency intervention. But the timing is also key in today’s correction as the greenback has been on a roll since mid-August, not just against the yen but also against other majors. So this seems like a good point for the dollar rally to take a breather now that it is all but certain that the Fed will hike rates by 75 basis points in September.

Fed Chair Jerome Powell reiterated his commitment on Thursday to bringing inflation down. In what was the clearest indication before entering the blackout period this weekend that the Fed will repeat a 75-basis-point rate hike at its September meeting, Powell said in an interview, “we need to keep at it until the job is done”.

Odds of a 75-bps move have been steadily firming over the last month and now stand at around 88%. Some investors might be wary of increasing their bets even further before next week’s inflation report in the United States, even though policymakers have been adamant that they’d want to see several months of softening price pressures.

After yesterday’s drop in weekly jobless claims to a three-month low, a weaker-than-expected CPI print for August is unlikely to stop the Fed from hiking by 75 bps again. Hence, the dollar’s pullback today is probably temporary, though it has at least aided the euro to reclaim parity, for now.

The single currency see-sawed on Thursday, coming under selling pressure during ECB President Christine Lagarde’s press conference, before bouncing back to climb to three-week highs around $1.01 today.

The ECB raised its key lending rates by 75 bps as expected yesterday and signalled that more are on the way. But Lagarde put a dampener on the hawkish expectations by hinting that the remaining meetings with rate increases are likely to be less than five.

Even if the ECB continues to surprise with more hawkish pivots, there’s only so much it can do to boost the euro when the economic outlook in Europe is so bleak at the moment.

EU leaders are meeting in Brussels today to discuss ways at easing the economic impact of the energy crisis. One of the proposals put forward is a price cap on Russian gas, but some countries are against this after Russia threatened to cut off all gas flows to Europe.

In Britain, Prime Minister Liz Truss’ announcement of an energy package worth an estimated £150 billion was overshadowed by the sad news on Thursday that Queen Elizabeth II died.

The new government’s plan, which involves keeping energy bills at current levels for the next two years for all households but for only six months for businesses, had a lukewarm reaction in the markets as investors worried about what kind of an effect it would have on the UK’s debt burden.

Sterling hovered around $1.15 during yesterday’s developments but has jumped to above $1.16 on Friday. The Australian dollar, meanwhile, led the advances among the commodity-linked currencies.

Stocks were also in a buoyant mood on Friday in spite of the ECB’s aggressive rate hike and the prospect of more by the Fed and others. Rate-sensitive financial stocks pulled the S&P 500 above 4,000 yesterday and were boosting European stocks today.

Asian stocks were in positive territory too as an unexpected drop in Chinese CPI data raised hopes of further monetary easing by the PBOC.

There seems to be a sense that markets are now close to pricing in all the hawkishness there is to price in, and this may be what is perking up equities, as the economic uncertainties have not really gone away and the emergency energy plans being announced in Europe and the UK have not impressed investors much.