As Bitcoin heads higher again, is it tracking gold or Wall Street?

The debate about whether Bitcoin is a good store of value, and thus, comparable to gold, has been rumbling on for some time. But more recently, Bitcoin and other cryptocurrencies have seen some positive correlation with the US stock market, and in particular, with tech and growth stocks. Bitcoin’s incredible post-pandemic rally came to an abrupt halt in November, and the price went into freefall soon after. The moves mirror closely what’s been happening in equity markets. But now that the cryptocurrency king is heading back up again, it’s not clear whether the bulls are taking the lead from gold’s resurgence or the rebound on Wall Street.Trading like a risk asset

Over the years, Bitcoin and the other major cryptocurrencies such as Ethereum and Ripple have frequently confounded their critics, becoming increasingly mainstream both as a payment option for consumers and as a worthy asset class among institutional investors. This spectacular growth has come even as cryptocurrencies face tougher scrutiny from regulators amid rising cases of fraud and their use in money laundering. 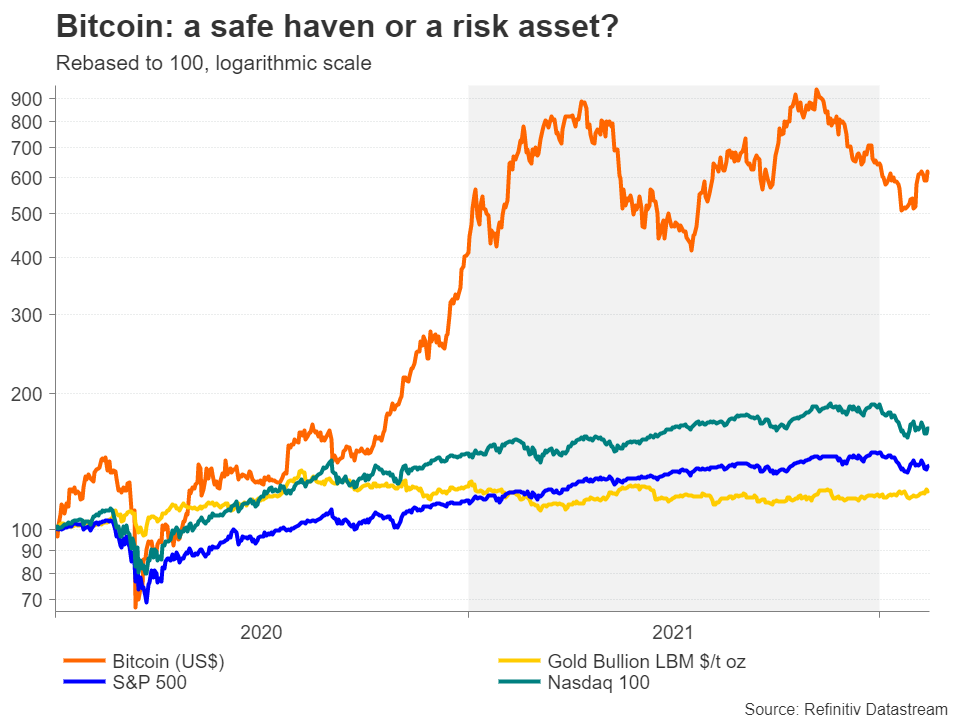 Bitcoin has skyrocketed by more than 500% since the beginning of 2020, and this after two big corrections, both of which took place in 2021.  The latter started to take shape as the tech-centric Nasdaq neared its peak. The price is currently trending up, recovering from a six-month low of $36,725 it hit on January 24. The upturn coincides with that in US equities - well, sort of. As Bitcoin started to mature in the mid-2010s, a positive correlation began to emerge with stocks in 2016. That correlation strengthened in 2020 and the close relationship with the S&P 500 since the onset of the pandemic is quite striking.

However, that relationship has weakened again slightly as Bitcoin’s rebound has been notably stronger than Wall Street’s wobbly comeback. Meanwhile, gold has been crawling higher this year as geopolitical risks have resurfaced. Tensions between Russia and Ukraine propelled the precious metal to eight-month highs above $1,890/oz this week. 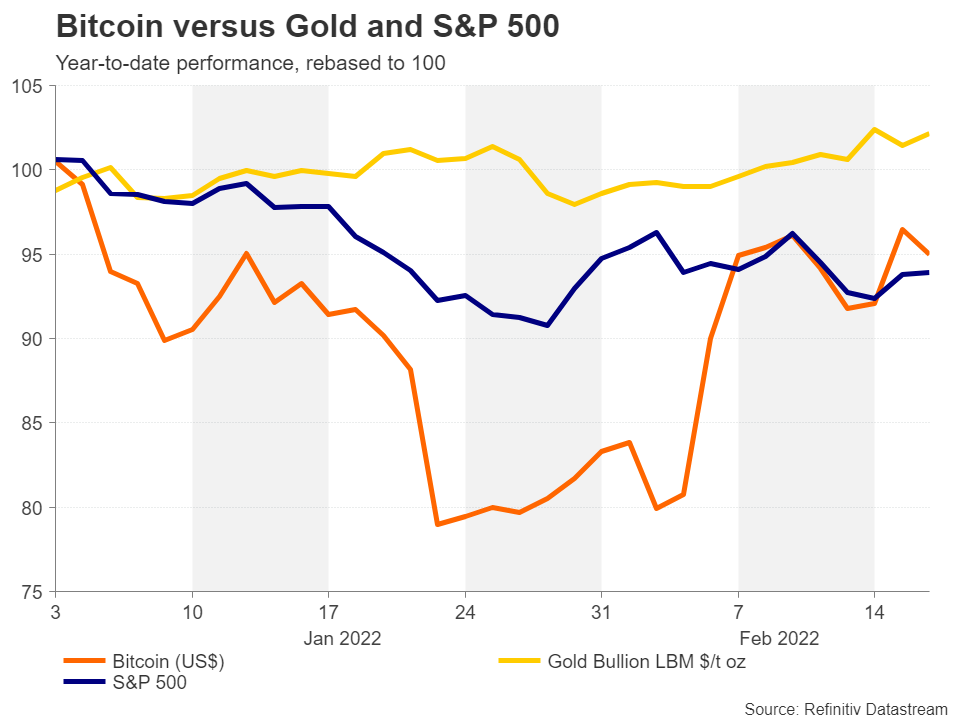 Bitcoin is often compared to the safe-haven gold, with some cryptocurrency enthusiasts dubbing it as the “digital gold”. However, although there have been periods when Bitcoin has risen in tandem with gold, sometimes even denting bullion’s upside, there are few convincing arguments that cryptos have safe-haven attributes.

A store of value

There can be no doubt about Bitcoin’s status as a store of value. Like precious metals, the supply of Bitcoin is fixed, and it can be stored and retrieved at a later date without deteriorating in value. It also functions as a medium of exchange and doesn’t have fundamental factors determining its price the way other assets such as stocks do.

This attribute is also the reason why some investors have been using Bitcoin as a hedge against inflation over the past year. In contrast, it can be argued that the boost to bullion from inflation hedging has been somewhat restrained compared to previous inflationary episodes.

Still, the question remains about whether Bitcoin is as good a store of value as the traditional haven gold. The recent geopolitical developments in Ukraine suggest otherwise. Although the broader rallies in both gold and cryptos coincide, the precise timings of the major price movements are unrelated.

A lot of upside

In fact, Bitcoin’s largest gains this month have been on the back of the improvement in market risk appetite following some upbeat corporate earnings that brought an end to the January slump on Wall Street. The only distinction here is that the rebound in cryptos appears to be on a more solid footing. 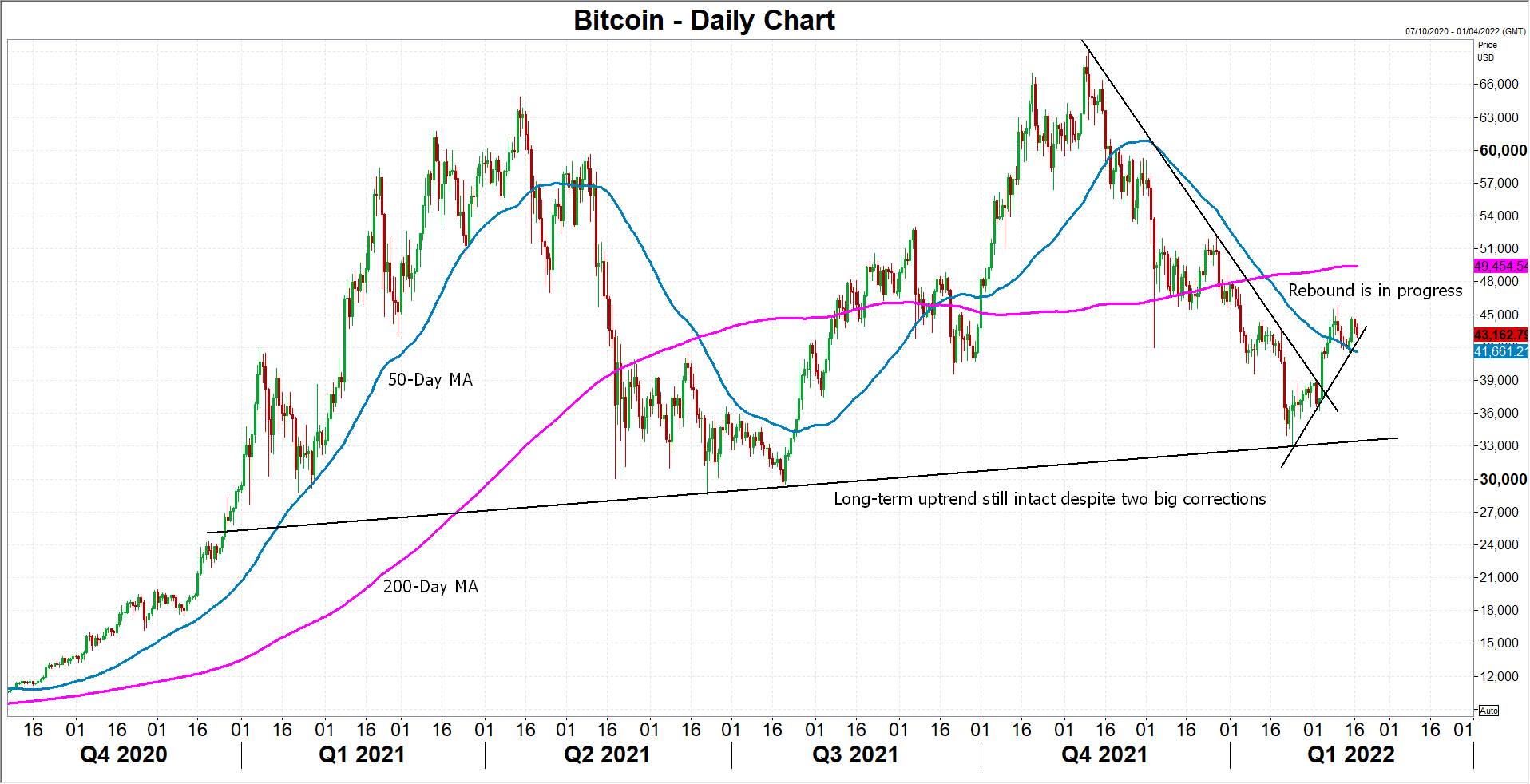 Crypto-specific headlines might have something to do with that. For instance, signs of a pushback against regulators seeking to ban cryptocurrencies have bolstered the uptrend after El Salvador rejected the IMF’s advice to drop Bitcoin as the country’s official currency, while the Russian government appears to have opted to regulate digital currencies rather than outright ban them.

In the meantime, Bitcoin itself has been benefiting from shifting trends within the crypto world, as the very first digital currency has been reasserting its lead over the market lately. Moreover, booming revenue for crypto mining companies despite the recent ban in China has further contributed to the positive sentiment towards Bitcoin.

Another factor to consider here is that a short squeeze triggered by the recent price jumps could have exacerbated the gains in the short term.

Can the rally last?

To sum up, the evidence suggesting that Bitcoin is a proxy for risk is far stronger than the evidence backing its safe haven characteristics. After all, it’s hard to justify that an asset can be considered a safe haven when it’s been so in sync (inversely) with the S&P 500’s fear gauge – the VIX volatility index – lately, not to mention the extreme bouts of volatility that are spurred on by tweets from certain high-profile personalities like Elon Musk. 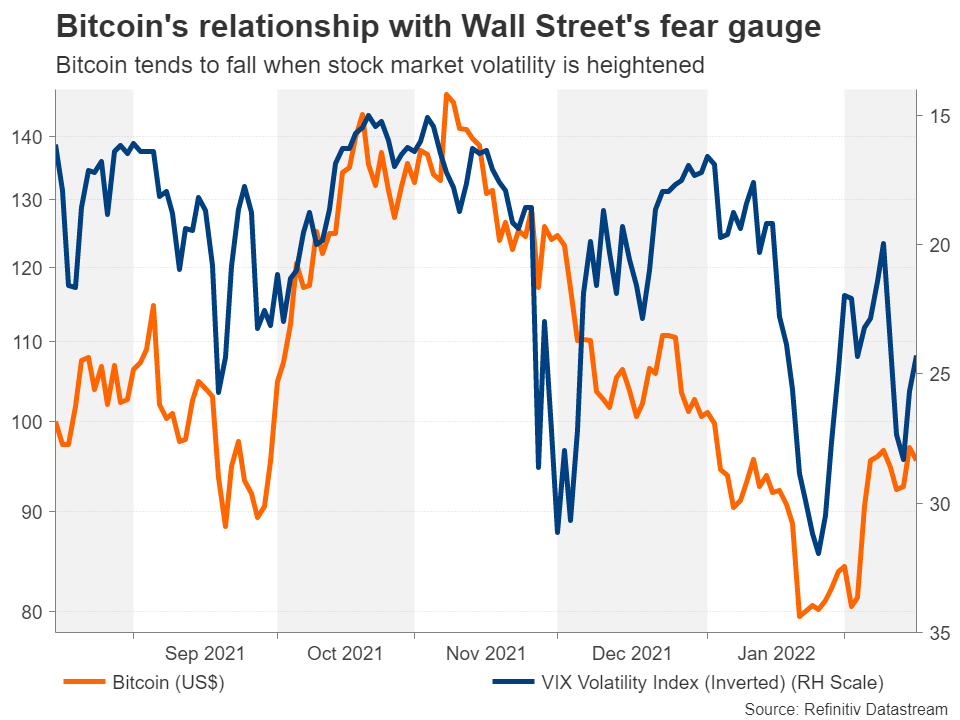 Over the coming months, when the Federal Reserve is expected to start raising interest rates and there is a more substantial tightening in financial conditions, it will be interesting to see what will Bitcoin align itself more closely with: gold or equities? Either way, there’s an elevated chance the latest upleg could soon hit another stumbling block.

However, in the longer-term, with a growing number of investment managers seeing the value of adding Bitcoin and other cryptocurrencies to their portfolios as a means of diversifying their holdings at the very least, further big rallies cannot be ruled out. Even the push for further regulation of cryptocurrencies could work out in the industry’s favour as this could inadvertently endorse cryptos as a valid asset class.