Can the EU’s energy plan rescue the euro from the doldrums?

The euro has been besieged on several fronts this year. Having already been on the backfoot due to the widening monetary policy divergence with the United States, the euro then had to contend with the immediate fallout of the war in Ukraine as harsh sanctions were slapped on Russia. But it is the ensuing energy crisis that now poses the biggest threat to the single currency as Europe is heading towards what could be the bleakest winter since the end of World War II. However, the European Union’s proposals to ease the pain of the energy crunch have offered some hope that an economic catastrophe can be averted. 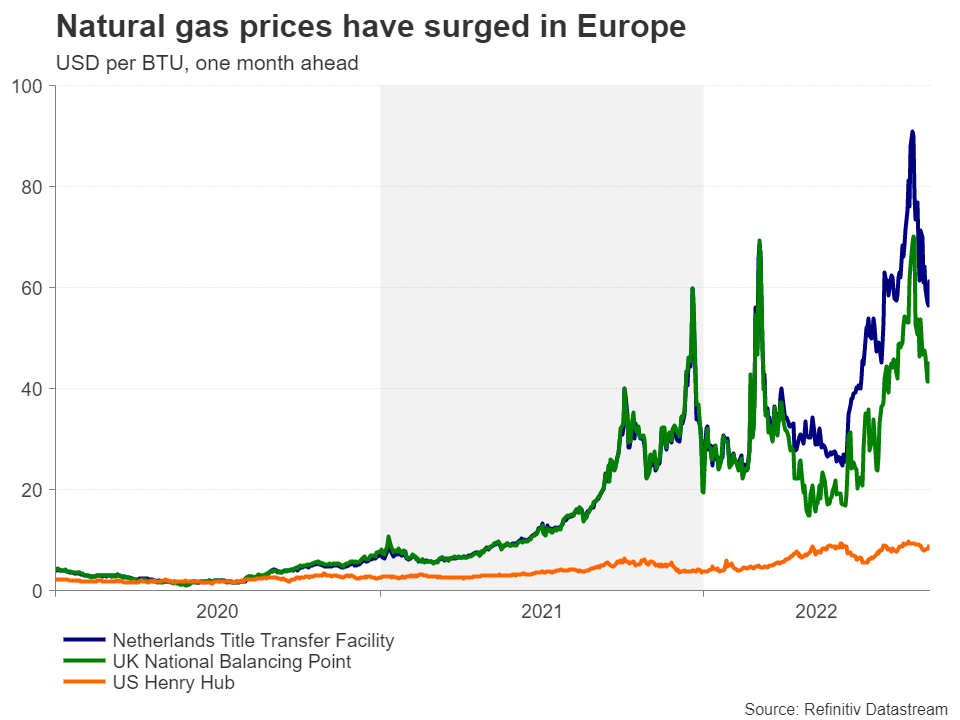 Although the euro does not have the misfortune of holding the title of the worst performing currency, it has nonetheless lost about 12% of its value against the US dollar in the year-to-date, extending the 8% decline from 2021. Hence, it was inevitable that it would reach parity sooner or later and the pair has been repeatedly testing that region for the past month. Much of the weakness can be attributed to dollar strength as the Fed has out-hawked the European Central Bank at every turn ever since the era of pandemic stimulus drew to a close. 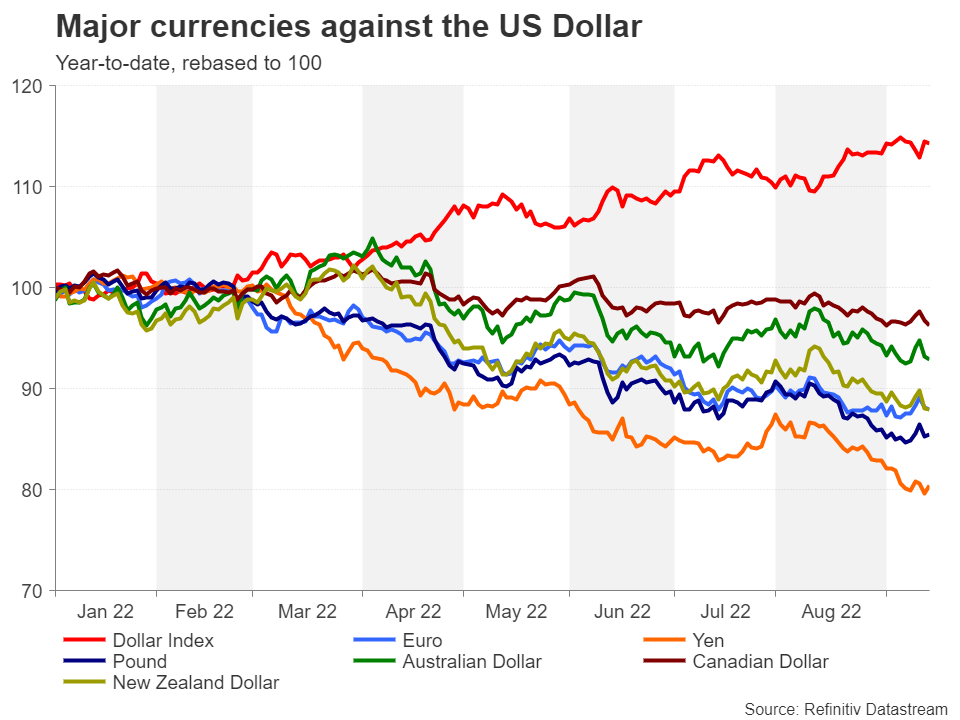 However, Europe’s economic troubles keep piling up and investors are increasingly gloomy about the outlook. Decades-high inflation has forced the ECB to hike interest rates at a time when households are being squeezed from the soaring cost of living, while businesses – still reeling from supply chain disruptions – face rising borrowing costs. But the situation escalated after Russia began to slowly turn off the gas taps to Europe.

Prior to the Ukraine conflict, Russia was Europe’s largest source of natural gas, supplying about 40% of its needs. But that share has fallen to just 9%, partly because European governments have been trying to wean off Russian gas and partly because Moscow has decided to use its exports as leverage to get the sanctions lifted by restricting the supplies that flow through the various pipelines from Russia. 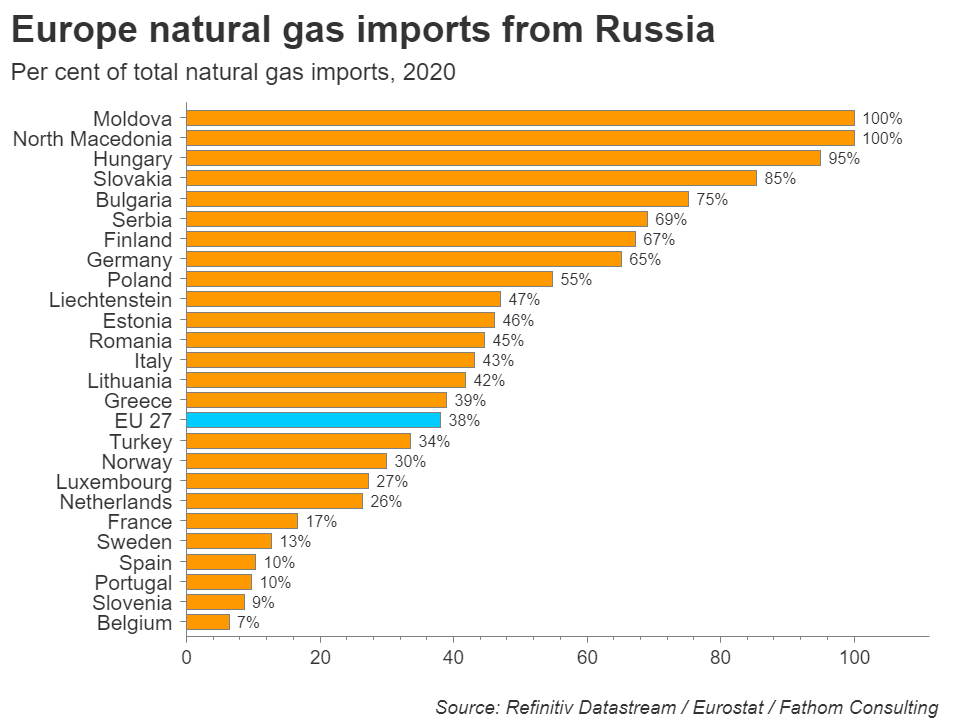 With the war unlikely to end anytime soon and the sanctions against Russia having failed to cripple its economy as intended, Moscow is in a position to maintain pressure on its European neighbors. So what does the EU plan to do about it?

Energy rationing is on the cards

The European Commission has announced a series of proposals to be discussed by member states at a summit on September 30. The EU wants to cap the revenue of non-gas electricity generators such as wind, solar and nuclear plants at 180 euros per megawatt. In addition, the Commission is proposing a windfall tax on fossil fuel producers. The proceeds in both cases would be redistributed to member states to be used as funds to support the most vulnerable households and businesses.

Moreover, the EU wants countries to reduce electricity consumption by at least 5% during peak hours and is also considering offering emergency credit lines to energy companies that are having liquidity problems.

However, plans for a price cap on Russian gas appear to have been shelved as there’s unlikely to be any agreement on it as some member states are worried this could prompt Moscow to completely cut off all gas flows to Europe.

Time is running out

With none of the above proposals involving a direct reduction in electricity bills and the decision on how the funds will be used to be up to individual member states, there are some doubts as to how effective these measures will be. This is assuming also that they don’t subsequently get watered down before they are finalized by EU leaders, who are not expected to approve the package before the European Council meeting on October 20-21.

Undoubtedly, investors are worried that time is running out for a meaningful response before the colder months set in.

Europe’s powerhouse – Germany – is already showing signs of strain. Its economy grew by just 0.1% in the second quarter and business sentiment has plunged since March. The uncertainty generated by the war in Ukraine, surging raw material and energy costs, rising interest rates, and now, a slowdown in its main trading partner China have dealt a huge blow to German exporters. 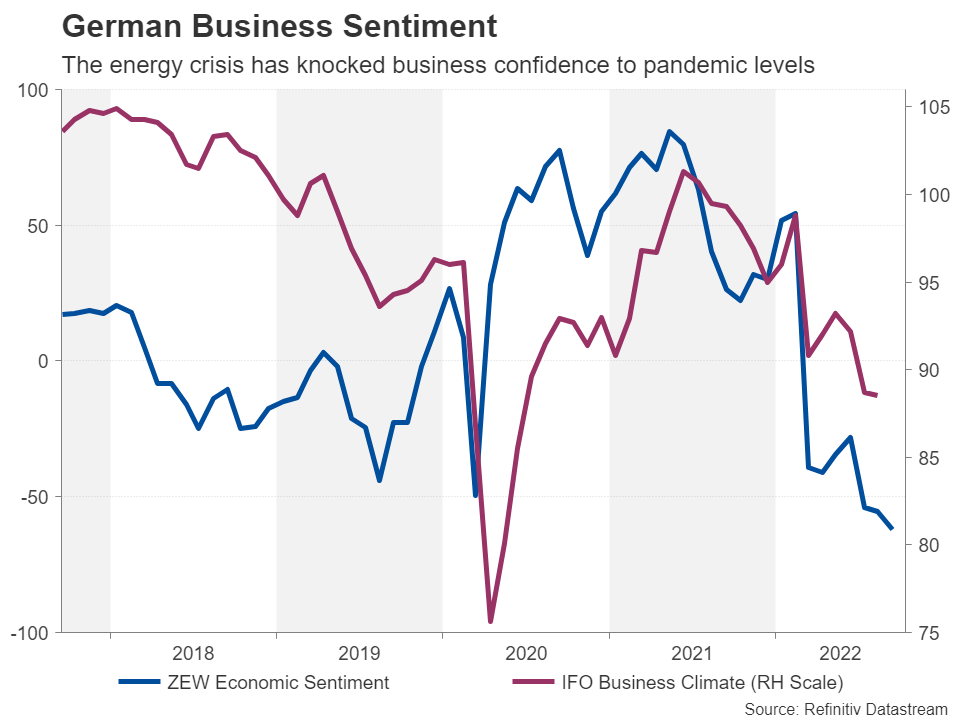 Against this backdrop, Germany is in bigger danger of a recession than other Eurozone countries and given that its economic outlook has a greater weighting in pricing risk and shaping sentiment towards the euro, it’s no wonder there is so much pessimism surrounding the currency.

Euro is staring down below parity

Making matters worse is fresh evidence that inflation in America is proving even stickier than anticipated, which can only translate to the Fed staying hawkish for longer. Unless the EU is able to put together an energy package that not only goes far enough in addressing the squeeze on customers from skyrocketing electricity bills but can also be enacted quickly and effectively, the euro will probably struggle to turn its fortunes around.

If the euro stays in its bearish trajectory, the next downward phase could see the peaks of 0.9595 from January 2001 and 0.9333 from September 2001 being revisited.

Can Europe avoid freezing this winter?

However, despite the odds now being stacked so decisively against the euro and even if the EU’s energy plan were to boost the Eurozone economy only marginally, the storm clouds may clear up a lot sooner than many are anticipating.

For one, gas storage facilities across Europe are currently filled at 84% capacity, which is above the average level of this time of the year.  Although this may still not be sufficient for Europe to get through the winter if it’s a very cold one, it does provide hope that the situation might not turn out to be as dire as is being feared. 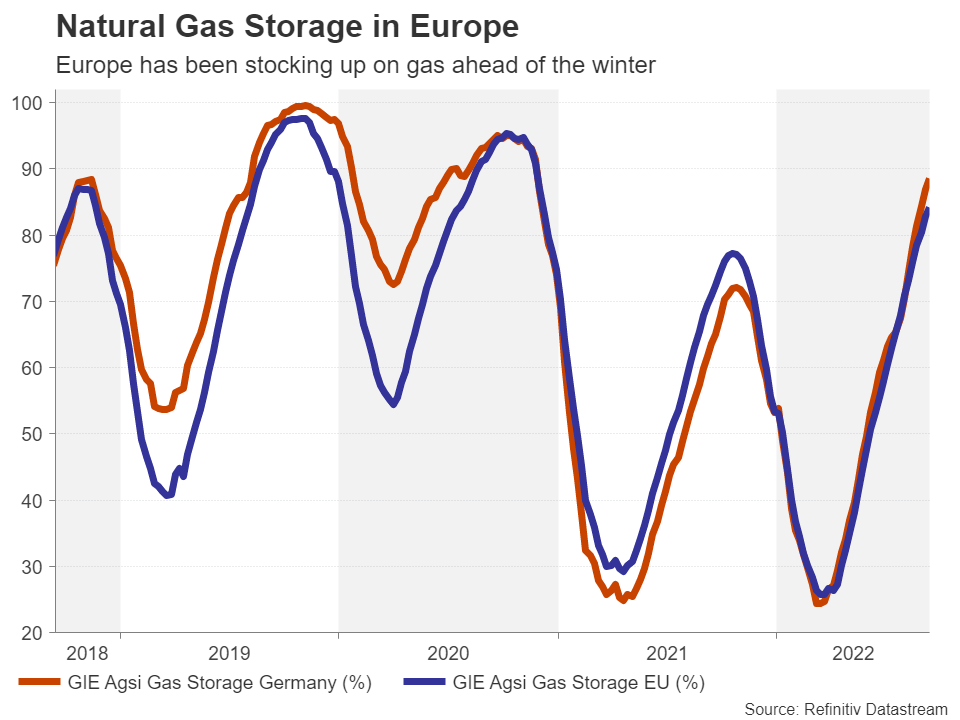 It’s also worth keeping in mind that part of the reason for such high natural gas prices at the moment is that all countries are rushing to secure supplies before winter arrives and once that wave passes and barring any further restrictions from Russia, there is potential for prices to tumble quite dramatically from current levels.

The euro’s other best hope of course is that inflation in the US does finally begin to drop more substantially in the next few months and the Fed’s tightening cycle comes to an earlier end. This could secure the euro a foothold above parity and in a more bullish outcome, help it stabilize in the historically popular region around $1.10.

But even if doomsday never comes and blackouts are avoided this winter, triggering some sort of a relief rally for the euro, the energy crunch will not necessarily be over. Europe could find itself in exactly the same predicament next winter if Russian supply is not restored. Much will depend on how quickly the EU is able to substitute gas with alternative sources of energy as well as beef up its infrastructure to increase storage capacity and handle more seaborne liquified natural gas.