What does Liz Truss mean for the UK economy and the pound?

The UK entered a new era on September 5, as Liz Truss became the nation’s new prime minister.  With inflation in the UK in the double digits for the first time in 40 years, the real disposable income for households has slumped to the lowest since we have data for, and therefore, frantic citizens may be biting their nails in anticipation of whether Truss’s new policies will indeed relieve them from the pain of prohibitively high consumer prices.Relief from price pain or more inflation down the road?

After Boris Johnson’s decision to step down as UK prime minister, the nation entered a period of political uncertainty with the Conservative party facing the task of electing a new leader and thereby, a new prime minister. Throughout the race the contestants were narrowed down to Foreign Secretary Liz Truss and former Chancellor of the Exchequer Rishi Sunak, with the former being crowned winner on Monday, September 5.

Truss has repeatedly vowed to cut payroll taxes, scrap a 1.25% uplift in National Insurance, and tackle energy bills, which are due to shoot up 80% from October 1, due to a rise in the cap suppliers can charge customers. The new prime minister officially announced on Thursday that she is planning to freeze household energy bills at the current level for two years, with the extra cost paid to suppliers by public borrowing under a plan prepared by the government.

All this sounds wonderful for the average UK consumer, but from a strictly economic standpoint, if implemented, those measures could prove inflationary. Consumers will be left with a little more spending money in their pockets in the short run, but more spending tends to push prices up later on. So, the temporary relief may be offset in the months to come, with inflation returning to hunt households’ disposable income. It’s a cycle. 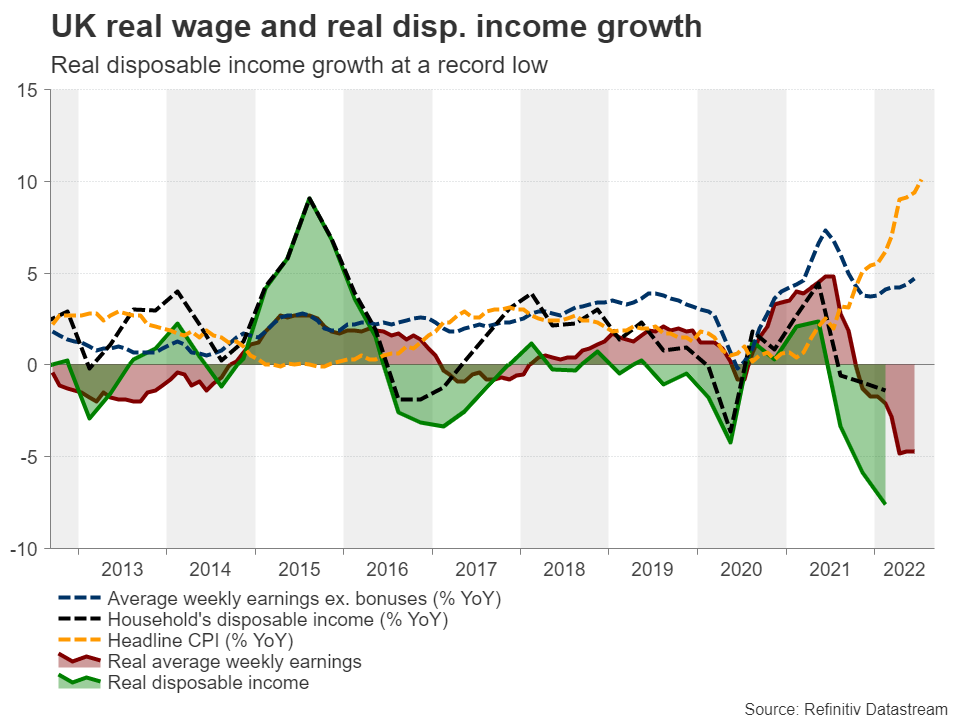 Will the BoE appear willing to adapt?

In its latest monetary policy report, the BoE projected that inflation would exceed 13% by year end, and a reasonable conclusion is that extra price pressures resulting from Truss’s policies may be translated to extra pressure on the Bank to raise rates faster in order to bring inflation to heel.

At first glance, expectations of faster rate hikes seem positive for the British pound. Maybe that’s why pound/dollar recovered from a two-and-a-half year low on Monday following Truss’s victory speech, in which she repeated her pledges. However, with the BoE remaining concerned that the economy will tip into recession by the end of the year, there may be ample room for disappointment. Actually, we got a glimpse of that on Wednesday, when BoE policymakers pushed against expectations over more aggressive tightening, resulting in the liquidation of pound long positions, and thereby another round of losses.

While this has prompted investors to tip the scale towards a 50bps hike, they kept the overall implied path much higher than 20 days ago, which suggests that even without new fiscal policies, the risk of disappointment is all but real. It may just grow more in case those policies come into effect. 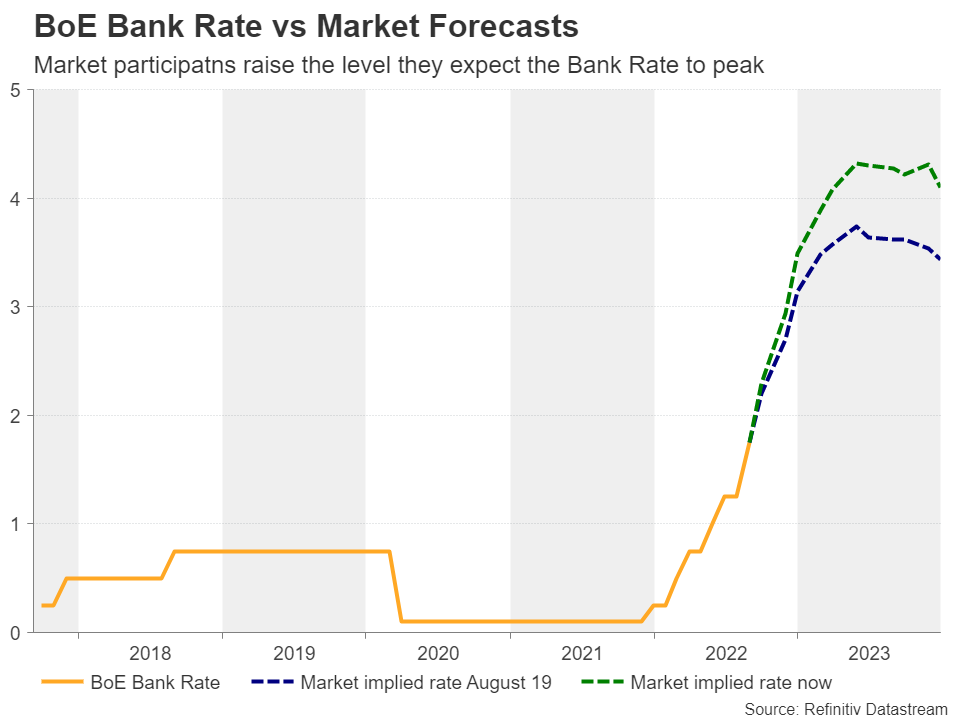 Is ‘twin deficit’ the pound’s kryptonite?

The pound has not only been falling victim to the performance of the domestic economy, but also to worries over a European and even a global economic crisis. Notwithstanding Britain collecting only around 4% of its gas from Russia, the fact that European nations now have to fill the gap created by Russian supply shortages from elsewhere, like Norway, has a knock-on effect on available gas for the UK, whose largest supplier is actually Norway.

On a bigger scale, sterling has been also linked to changes in the broader, global market sentiment, as due to its ‘twin deficit’, the currency has developed risk-linked characteristics. Worries regarding China, the world’s second largest economy, which has been suffering due to a battered property sector and the resurgence of COVID, as well as expectations of more aggressive tightening by major central banks have been keeping sterling’s head down. This is evident on the graph below. Pound/dollar closely tracks not only the mid-cap FTSE 250 – whose members are heavily dependent on the domestic economy – but also the S&P 500. 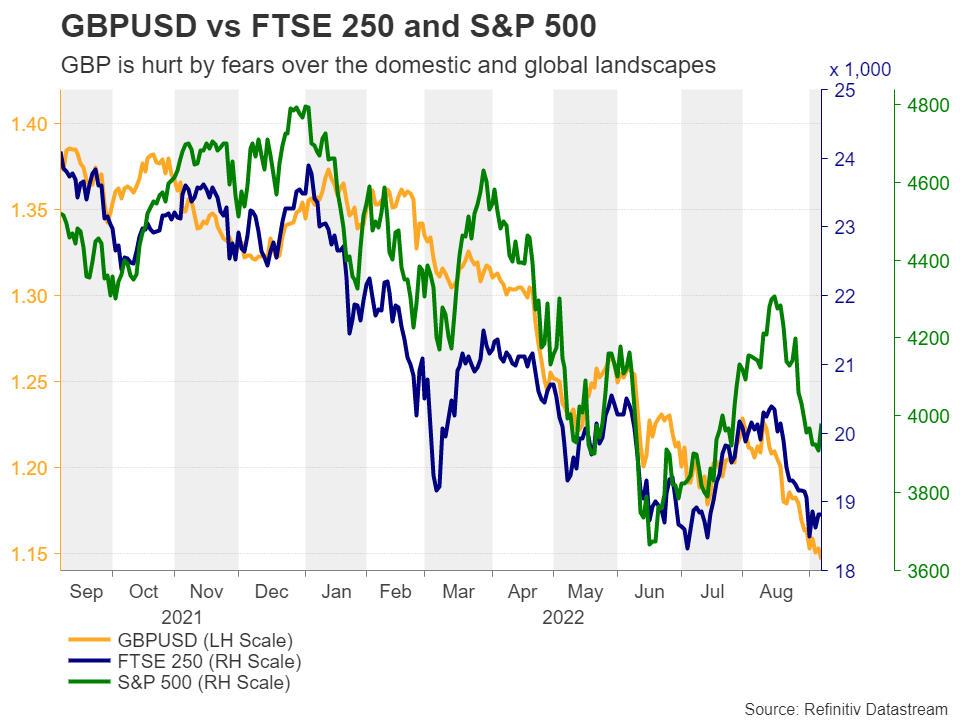 A twin deficit is when a nation has both a current account deficit and a government budget deficit. With the new prime minister set to finance her energy-bill plan through public borrowing, the budget deficit might be destined to widen further. In essence, the pound could become even more sensitive to the broader market appetite. For the UK to escape the twin-deficit trap, it must attract net financial inflows to finance its current account deficit, but with direct investment to its lowest since 2007, this appears to be a hard task. 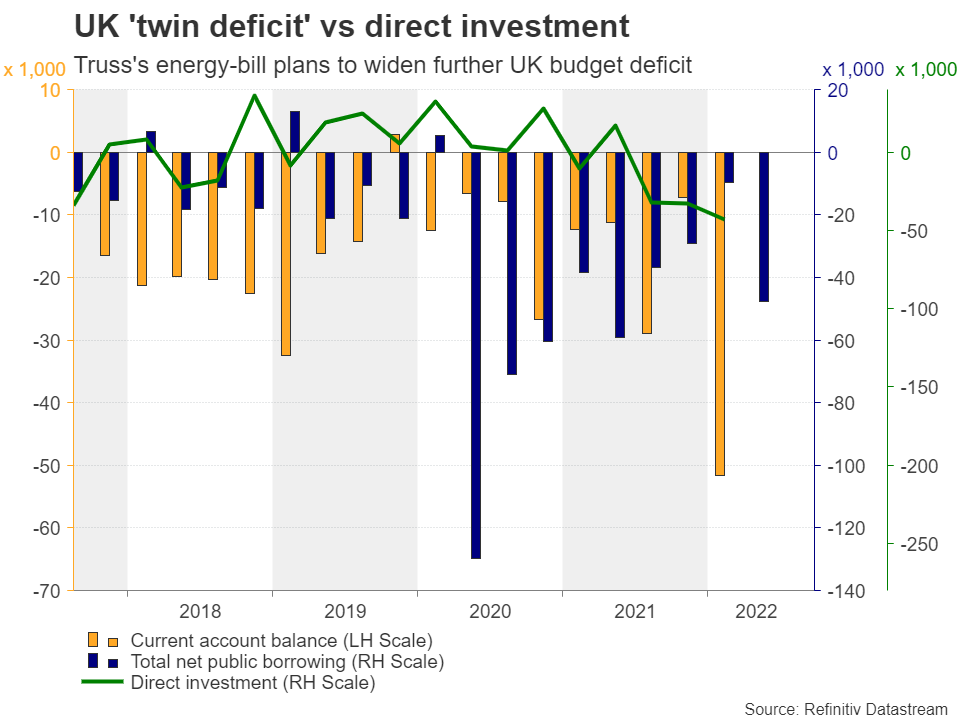 Downside risks remain prominent either waySumming up, the British pound has been carrying the burden of uncertainties, not only from a domestic standpoint, but on a global scale too due to its sensitivity to risk. The policies promised by the new prime minister might magnify the downside risks, but even if they don’t, the current picture is ugly enough by itself. Thereby, it is hard to imagine how the new government could come to the pound’s rescue, and even if a few investors see light at the end of the tunnel, it may take a great deal of time and effort for a newly formed government to convince the broader financial community to trust its abilities to handle existing risks.

Will oil prices climb back above $100?