Earnings releases for major US banks will resume with Goldman Sachs unveiling its results for the fourth quarter on Tuesday before the market opens, followed by Morgan Stanley and Bank of America on Wednesday, also before the markets’ opening bell. The financial institutions are expected to end 2021 on a firm note, capitalizing on high investment banking activity and the release of reserves from non-materialized loan losses.Solid core revenues in the picture

Goldman Sachs, Bank of America and Morgan Stanley are expected to report an uptick in their core revenues for the fourth quarter of 2021. Those expectations are driven by the increase in lending activity after the US government ended its pandemic stimulus program, with consumers and businesses turning back to financial institutions for credit. Moreover, the booming stock market probably led to a spike in lucrative investment banking fees due to solid trading activity and an all-time high demand for mergers and acquisitions (M&A). 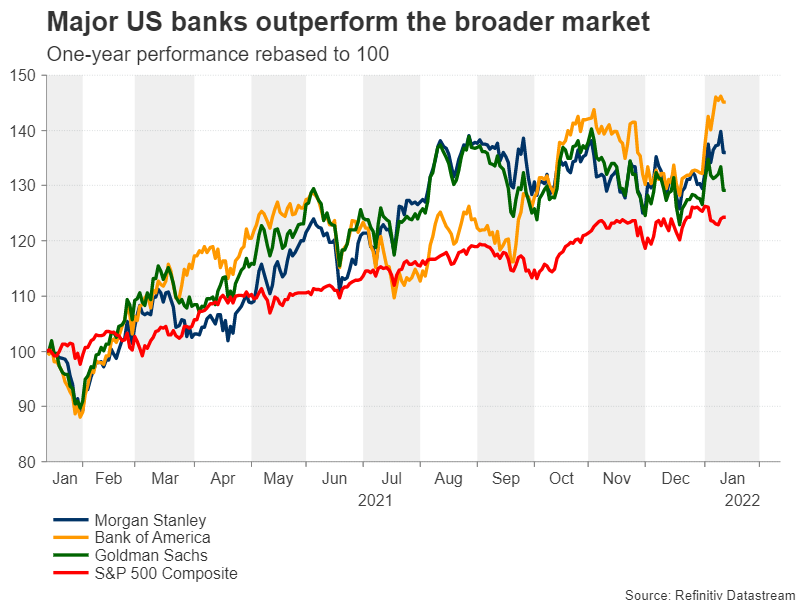 US banks have recently announced the release of reserves that were set aside to cover potential losses on loans they feared could turn sour during the pandemic. This factor is also anticipated to be positively reflected in the upcoming earnings releases. However, headline revenues for the three banks are expected to be mixed due to differences in how each institution accounted for those non-materialized loan losses, restructuring costs, and asset sales.

In the upcoming conference call, investors will be waiting for an upbeat note regarding the core earnings outlook from the bank’s executives. The bigger picture is expected to be optimistic. However, failure to provide positive projections for 2022 could significantly weigh in their respective share prices.

US banks to witness the real power of deposits

Looking ahead, the currently increasing demand for loans, alongside the expected interest rate hikes in 2022, could give US banks the opportunity to utilize their large base of deposits - which has surged during the pandemic – increasing their net interest income. Therefore, 2022 could prove to be another stellar year, in an environment where tech and high-growth stocks could face downward pressures on the back of rising yields. Moreover, historic evidence supports the thesis for higher stock returns on the banking sector in periods of increasing interest rates.

What could derail earnings?

Coming into 2022, the most significant risk for the US banking sector lies with the possibility of more aggressive monetary policy tightening than currently anticipated. If the Fed raises interest rates too rapidly, the already ‘hot’ stock and housing market might cool off, translating into lower M&A activity and reduced demand for mortgages, which could hurt revenues. 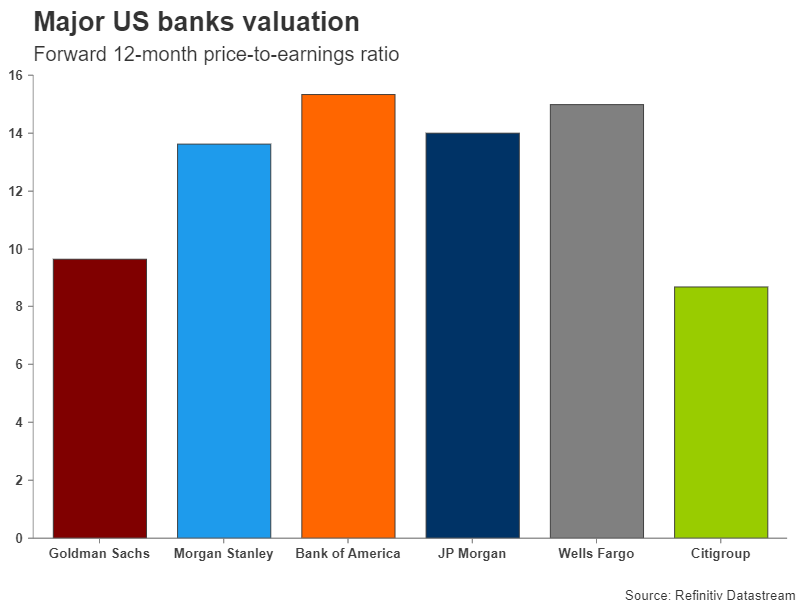 Will Bank of America’s rally continue in 2022?

Bank of America’s (BoA) shares were up by over 45% in 2021. Its high base of non-interest paying deposits – expected to reach $2.01 trillion – puts the institution in a powerful position to capitalize on the higher interest rate environment of 2022. The company aims to catalyze growth through shifting its attention towards its traditional banking segment, by enhancing its digital capabilities, eliminating the bounced check penalty and reducing its overdraft fees.

According to Refinitiv estimates, analysts are targeting $22.26 billion revenue and $0.76 in earnings per share for the fourth quarter, marking a 10.14% and 29.20% year-over-year growth, respectively. From a valuation perspective, BoA has a forward price to earnings ratio of 15.4, which denotes the dollar amount someone would need to invest to receive back one dollar in annual earnings. This is slightly higher compared to its rivals, which can be attributed to its lower-risk core segment of traditional banking.

The New York-based bank is expected to report $12.05 billion in revenues and $11.76 in earnings per share for the fourth quarter, marking a year-over-year growth of 2.64% and -2.65%, respectively. The company will likely retain its leadership in global M&A activity, with analysts forecasting an impressive 13.93% y/y growth in profits from its investment banking division. 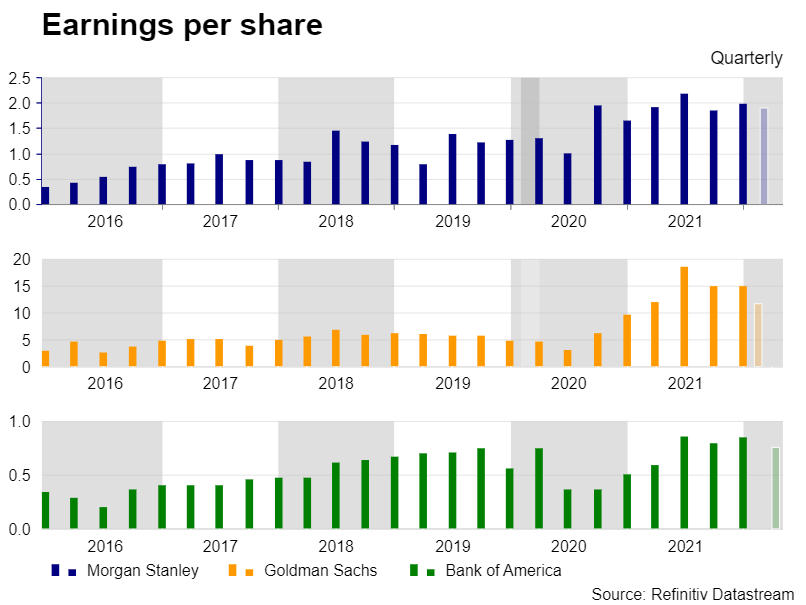 Goldman Sachs is currently leaning into technological advancements to drive its market share higher, emerging as the most capable institution to keep up with growing fin-tech banks that are disrupting the old-fashioned financial sector. The company’s efficiency ratio – denominating how much the bank spends to generate $1 dollar of revenue – is expected to clock in at 54.7% for the fourth quarter, the lowest compared to its peers, reflecting the firm’s efficiency in generating profits.

From a valuation perspective, Goldman Sachs appears to be trading at a discount compared to its competitors with a forward price-to-earnings ratio of 9.4. Therefore, despite its stock increasing by 45% over 2021, the company remains a safe pick as well as a strong growth play.

The financial institution has been making efforts to focus less on its capital markets division, with the acquisitions of E*TRADE and the investment management company Eaton Vance, considered to be a significant step towards this direction. The Eaton Vance acquisition, announced in March, is expected to have aided Morgan Stanley's investment management division's proceeds to increase by 47.4% during the last quarter of 2021.

The leading US bank is also anticipated to report revenues of $14.6 billion, which would mark a nearly 7% year-on-year growth. In contrast, earnings are projected to witness a yearly decrease of 0.64%, settling at $1.91 per share. Furthermore, the company is expected to see its already high efficiency ratio rising to 68.6%, meaning that more capital was required to generate revenue during this last quarter.

Taking a technical look at its stock, better-than-expected results could push the price towards the 105.33 level. However, should the results disappoint, immediate support might be found at the 50-day simple moving average (SMA) currently at 99.75.