Stock markets have been shaken this year by increasing fears concerning the global economic outlook. Persistent inflationary pressures, worries over recession, and the anticipation of aggressive monetary tightening have been largely weighing on investors’ risk sentiment, luring away liquidity from risky assets. Although many investors have been endorsing a buy the dip strategy in the past few days, it seems that the major US indices have not bottomed yet. So, let’s take a closer look at what has been driving the US indices lower lately.It’s all about inflation

Last Friday, the April US CPI report hit the markets, with the inflation rate coming out at 8.3% on an annual basis, which was lower than the March figure of 8.5% but still topped market projections of 8.1%. Even though this was the first clue that inflation in the US is peaking, the stronger-than-expected reading crushed markets’ anticipation that the Fed could actually slow down its monetary tightening and perform a softer landing. Therefore, stocks received a significant blow as the expectation of higher interest rates is hurting both the firms’ valuations and access to ‘cheap’ funding.

But it's more than that, the explosive cocktail of high inflation and higher interest rates poses a broader threat to the economy. Firstly, considering the continuously increasing cost of living, the broader economic uncertainty, and the withdrawal of excess liquidity investors might prefer to play defence, curtailing their exposure to risky assets. Furthermore, as rising interest rates entrain bond yields higher, the average investor might tilt to fixed-income assets that would be now starting to provide a considerable return. 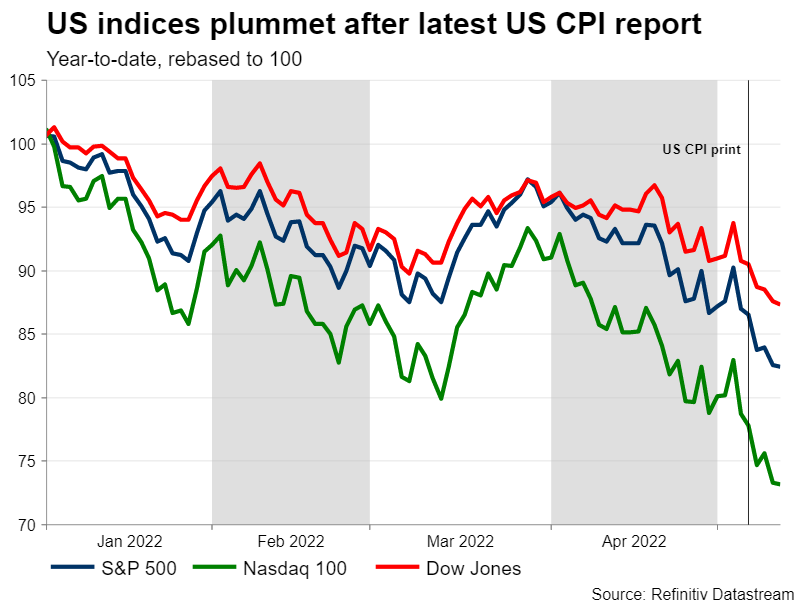 Energy crisis is here to stay

Russia’s war against Ukraine has heightened fears over global economic growth due to the world’s reliance on Russia for energy commodities. Most Western allies have been threatening Russia with stricter financial sanctions, which could include a total ban on Russian oil and natural gas imports if it continues its assault. This development would not only keep inflationary pressures elevated for longer, but it could also hurt manufacturing production.

Aside from that, the long-lasting war and the continuous threats of Russia to other countries have increased global uncertainty, leading to more volatility in stock markets as investors opt for a flight to safety via safe-haven assets. Therefore, the situation could get even worse for risky assets if the war spreads to other countries, while a potential ceasefire would improve investors’ risk sentiment.

The Chinese government’s pursuit of zero-Covid policy has significantly slowed down manufacturing production and created global supply chain disruptions. In turn, this has led to rising costs for most enterprises all around the world, with many of them not being able to pass on increasing costs to their consumers. As a result, profit margins are getting squeezed, deteriorating firms’ financial performance, which eventually leads to disappointed shareholders selling their stakes.

Where will the downfall stop?

Taking a technical look at the Nasdaq 100, we could observe that despite the higher close in yesterday’s session the index is currently on a profound downtrend.

Should selling pressure intensify further, a potential reversal point for the price could be found at the 10.842 region, which is the 200% Fibonacci extension of the 13,031-15,219 up leg.