The euro was in the doldrums during the lockdown period until the two largest EU economies came together in support of a new recovery fund which would give out grants, sending the common currency to a three-month high. The amount announced is not significant but perhaps is considered enough to lead to more integration if it is finally approved at the EU virtual summit this Friday which will also discuss the long-term EU budget. Expectations are for the debate to be tense and incoclusive. However, the euro may not care if the talks appear constructive, opening the door for a deal in the near-term.

EU leaders to debate budget, but more time may be needed

EU leaders are scheduled to hold a video conference on Friday to discuss the European Commission’s revised 2021-2027 budget proposal of 1.1 trillion euros and the temporary virus recovery fund of 750 billion euros mutually backed by Germany and France in late May. The truth is that despite the increasing pressure from Brussels and the ECB to ramp up spending, fiscally prudent Germany was previously strictly rejecting any policy that would create additional debt and spoil its self-imposed balanced federal budget rule which has created surpluses in the past. While the amount of the recovery fund is not significant, accounting only for 0.7% of the yearly GDP for the next four years, the surprising announcement was a big relief to the markets and the trigger for an almost 5% rally in EUR/USD last month as the EU desperately sought fiscal unity on the brink of its worst recession since World War II thanks to the covid-19 outbreak. However, what really boosted sentiment was the design of the program. The money will be collected by the highly credit-rated European Commission in financial markets on behalf of the EU, two-thirds of which will be channeled through grants to the most harshly affected regions from the virus, while the remaining will be given as conditional loans that will be repaid after 2027 for 30 years.

As usual the plan did not receive full support in the politically divergent Euro zone. Although countries such as Italy, which want to avoid programs that include austerity measures, welcomed the proposal, the Netherlands, Austria, Denmark and Sweden also known as the four ‘frugals’ opposed the suggestion and are not expected to easily approve it on Friday if the conditions under which the funds will be distributed remain unchanged. Specifically, the Commission suggested to allocate the money based on GDP, GDP per capita, and the unemployment rate registered in the 2015-2019 period but the aforementioned states disagree as the use of pre-crisis indicators is not reflecting the impact of the virus and mostly benefits eastern members instead of the hardest hit southern Europe. The list of opposition saw further expansion recently as more members asked for adjustments regarding the balance of grants and loans as well as the period of loan repayment, signalling that the debate could be too complicated to conclude on Friday. 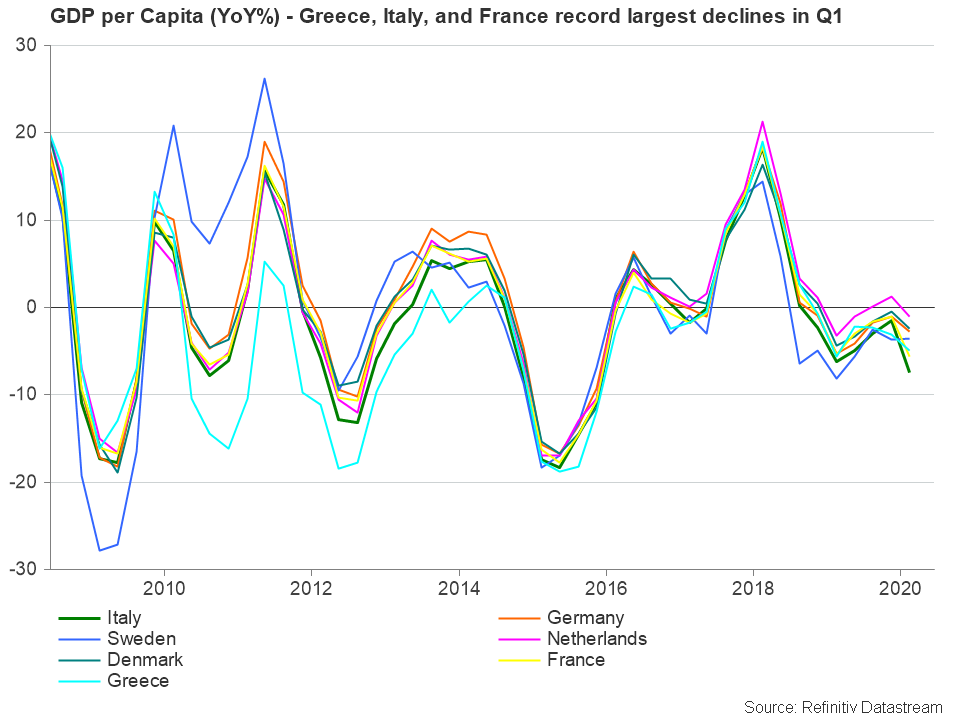 Do not forget Brexit

Maybe the Brexit saga could be another reason to take more time for thought. Despite talks being put off thanks to the covid-19 breakout, the UK Prime Minister refused to extend the transition period beyond December and pledged to intensify negotiations in order to get a trade deal done as soon as July. This is a very strict deadline that could easily be postponed given the fact that no progress has been made on trade relations since the UK left the bloc in January, while a deal in December is also in doubt as both sides may need to successfully complete smaller rounds of negotiations at a faster pace which may lead to a bad agreement. Hence, a no-deal Brexit should not be ruled out and the EU may be forced to boost its stimulus package to encounter the risk of further financial disruption.

A deal could be possible in the near term

On the other hand, Franco-German consensus always finds its way to success and it is rare for other counties to derail it. In other words, a budget may not take long to complete and be approved. If Friday’s summit is too short to resolve disagreements, EU leaders could push efforts to finalize a budget in July when a face-to-face special meeting is expected to take place if health guidelines enable it. Besides, it is Germany’s turn to host the rotating European council presidency in July and what could be a worthier goal for the German Chancellor than another victory proving her capability of managing a crisis period with success. Note that the budget also requires an approval from all 27 national parliaments, while rumors suggest that the money could be distributed only long after the pandemic. Therefore, the faster the bloc clinches a deal, the fastest the member states will receive the funding.

In market terms, a short delay may not disappoint euro traders if the summit appears constructive enough to lead to a deal at some point this summer. Yet, if leaders leave the conference with more questions than answers, doubting the possibility of a deal in the near-term, the common currency could find new sellers – especially if it closes below the 1.1230 level against the US dollar. As such, support may run towards the 20-day simple moving average and the 1.1145 former resistance zone, a break of which could bring the 1.1100 mark into focus.

In the positive scenario where a budget is announced on Friday, EUR/USD could fly towards the 1.1335-1.1370 resistance region. Higher, the rally may retest this month’s peak of 1.1420 and then the closing price of 1.1450 registered on March 10.