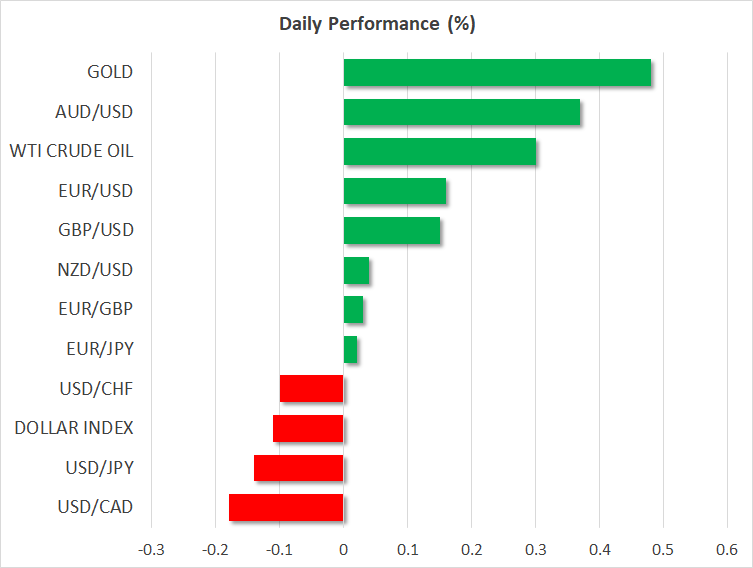 The British pound touched a fresh 11-month low against the dollar yesterday, pressured by renewed speculation that a no-deal Brexit is becoming increasingly more likely. The currency’s drop followed some remarks from UK international trade secretary Liam Fox that the chance of a no-deal exit from the EU has become more likely than leaving with a deal, in his view. Then on Monday, a UK government spokesperson reiterated the mantra that “no deal is better than a bad deal”, likely amplifying market worries.

The next round of Brexit talks is scheduled for August 16th. However, considering that EU chief negotiator Michel Barnier implicitly rejected the UK’s latest Brexit plan by saying it “undermines” the single market, it remains doubtful whether meaningful progress can be made at a pace rapid enough to allow for a smooth exit by March next year. Combined with the latest dovish tilt by the Bank of England, these suggest that the sources of support for sterling over the coming weeks may be scarce.

The US dollar posted another day of advances on Monday, even as yields on longer-term US bonds dropped amid concerns over escalating trade tensions with China. The trade narrative is likely to remain at the forefront, especially after the signals from China that it will not give in to US pressure. The safe-haven Japanese yen could remain the barometer for the trade standoff – gaining when tensions intensify and retreating on any signs that a negotiated solution may still be achievable.

Elsewhere, aussie/dollar is higher by 0.37% today, after the Reserve Bank of Australia kept its policy unchanged earlier but appeared slightly more optimistic. Specifically, policymakers appeared confident that despite some shortfalls in inflation this year, price pressures are expected to be higher in 2019 and 2020.

In EM, the Turkish lira touched another fresh record low as USDTRY rose to 5.425 yesterday, after the US administration said on Friday that it is reviewing Turkey’s duty-free access to the US market. 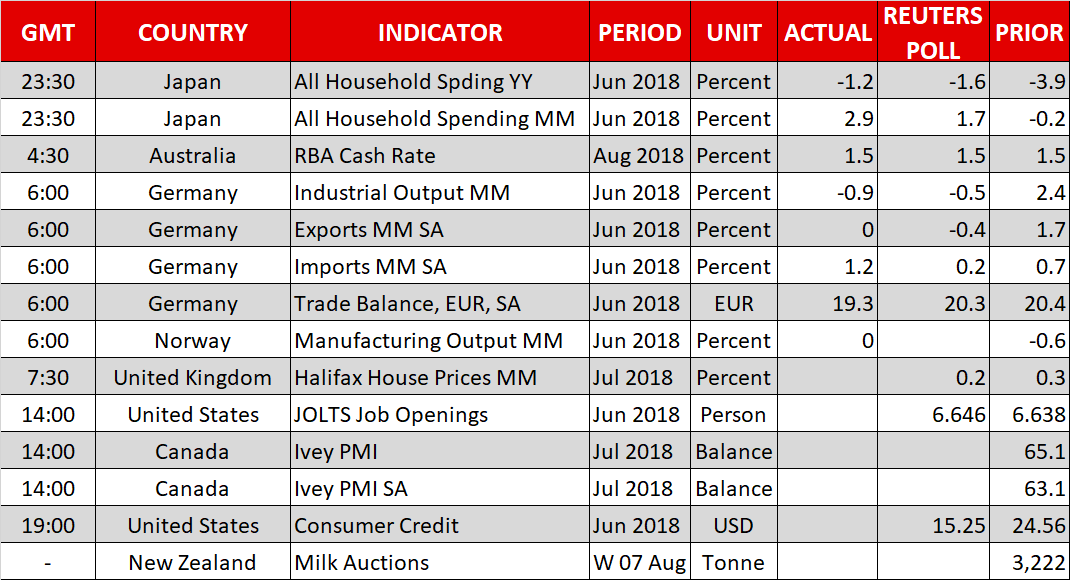 Day ahead: Job openings and consumer credit data due out of the US

Among Tuesday’s releases are jobs openings and consumer credit data out of the US.

The Halifax house price index that measures housing prices in the UK will be made public at 0730 GMT. Prices are anticipated to grow by 0.2% m/m in July, after rising by 0.3% in June, a month during which prices eased to a four-month low in annual terms.

June’s JOLTS job openings report out of the US is due at 1400 GMT and is expected to show job openings standing at 6.646 million, slightly above May’s 6.638m and not far below April’s record high of 6.84m. Also out of the US, will be consumer credit data for June. Those are slated for release at 1900 GMT.

Canada’s Ivey PMI for July will be hitting the markets at 1400 GMT.

The outcome of the bi-weekly milk auction will be known later today; the relevant print lacks a specific time of release. The kiwi will be generating attention as the data are made public given that dairy products are New Zealand’s largest goods export earner.

In the meantime, geopolitics are at play as well: the Trump administration is proceeding with re-imposing sanctions on Iran, while there appears to be some confusion as regards how a denuclearized Korean peninsula will come to fruition.

In equities, Disney will be reporting quarterly results after the US market close.

In energy markets, API weekly data on US crude oil stocks are due at 2030 GMT. 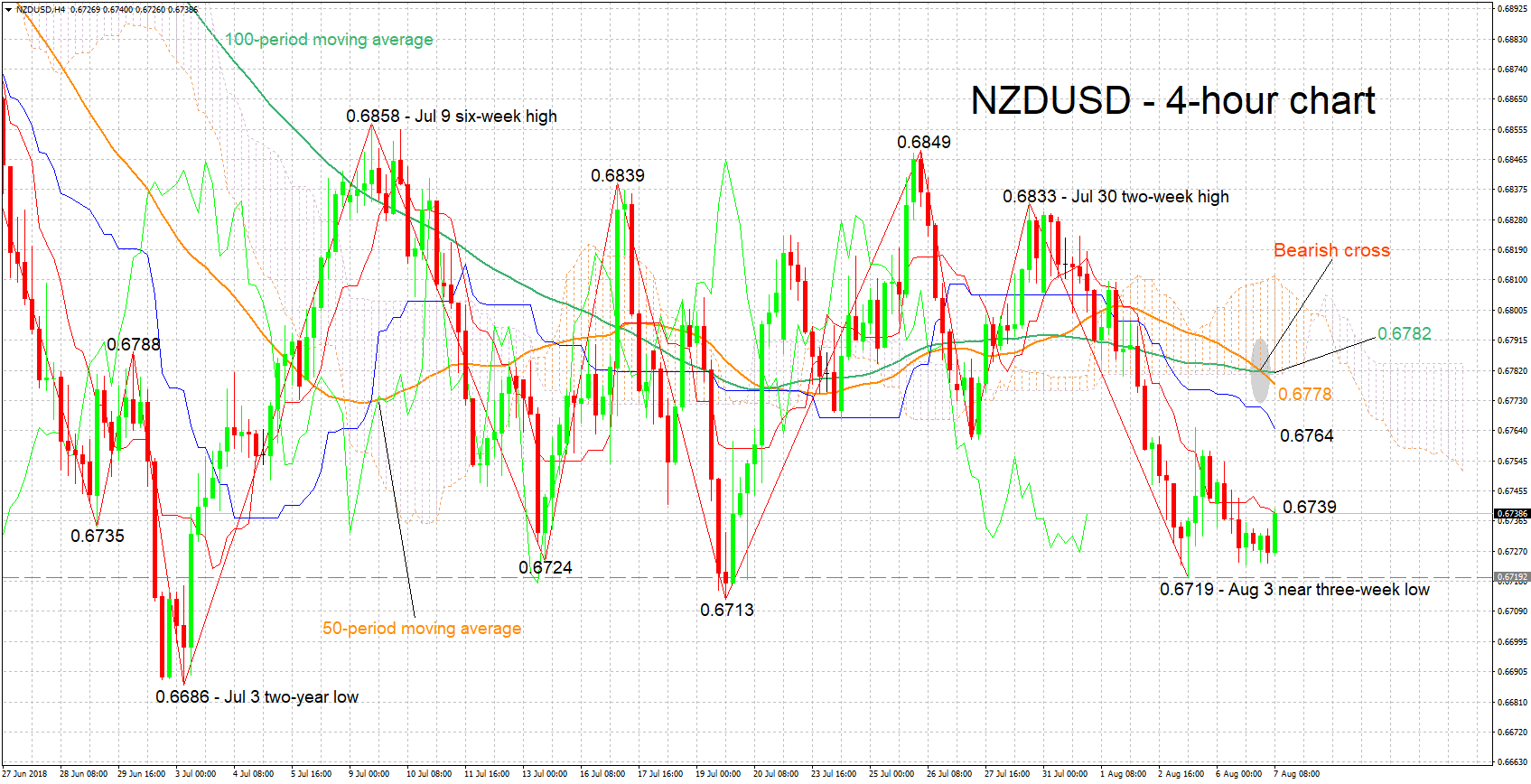 NZDUSD is trading roughly 20 pips above Friday’s near three-week low of 0.6719 and not far above the two year-low of 0.6686 hit in early July. The Tenkan- and Kijun-sen lines are negatively aligned in support of a bearish bias. New Zealand’s economy relies on commodity exports and the deteriorating outlook on global trade on the back of US protectionist actions and rhetoric has been weighing on the kiwi.

Should trade developments paint a rosier picture ahead, then the pair is likely to gain. Immediate resistance to gains seems to be taking place around the current level of the Tenkan-sen at 0.6739. Stronger gains would shift the attention to the Kijun-sen at 0.6764, with the 50- and 100-period moving average lines and the Ichimoku cloud bottom lying not far above.

Conversely, escalating trade tensions may push NZDUSD further below. Initial support to losses could come around last week’s near three-week low of 0.6719; the region around this captures a couple of bottoms from the recent past as well. Steeper declines would bring into scope the two-year low of 0.6686 from July 3 and then the 0.66 round figure.

The pair may see some reaction to today’s milk auction as well, with higher dairy prices generally seen as kiwi-positive and vice versa. Thereafter, the RBNZ rate decision on Wednesday at 2100 GMT could impact the pair.