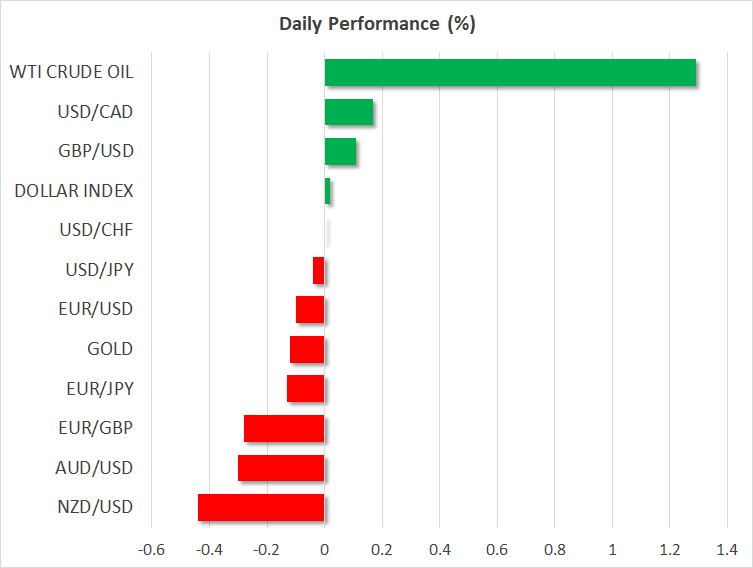 The Fed’s newly appointed Vice Chairman, Richard Clarida, struck a rather cautious tone on Friday, indicating there’s growing evidence global growth is slowing and that the Fed is drawing closer to “neutral”. Regional Fed Presidents Kaplan and Harker echoed a similar bias, with Harker even suggesting he’s not convinced a rate increase in December is “prudent”. Markets interpreted these remarks as a signal the Fed is growing collectively more concerned over international headwinds, and that it may fall short of meeting its own rate projections in 2019 should this global softness spill over into the US.

Hence, the dollar fell alongside US Treasury yields, which declined across the maturity spectrum as investors priced out rate-hike expectations in 2019. A 25bps hike in December is still priced in with a 75% probability according to the Fed funds futures, but after that one, investors only anticipate one more in the first half of 2019, implying the Fed is now expected to pause hiking for at least a quarter. If more Fed officials – and particularly permanent FOMC voters such as Brainard or Williams – assume an equally defensive stance, that could be the trigger for some more long-dollar bets to be unwound. Williams speaks today at 1545 GMT.

In the UK, sterling moves remain purely a function of Brexit headlines. The latest reports suggest that 42 out of the 48 letters required to trigger a no-confidence vote in PM May have been collected, so a Tory leadership struggle could occur at any moment. Even if she manages to win, any such fight would only serve to underscore the fragility of May’s position. Thus, moves in the pound are set to stay headline-driven and large in magnitude, especially considering the market may be thinner than usual following the violent swings in recent sessions.

Elsewhere, US stocks closed mostly higher on Friday, aided by optimism a Sino-American “trade ceasefire” may be looming after President Trump said he may not impose further tariffs on China. This may have also contributed to the dollar’s underperformance, as haven-bets on the currency were pared back. That said, it’s questionable whether a “truce” will finally be brokered, given comments from US Vice President Pence over the weekend that the US is in no rush to end the conflict.

Day ahead: Brexit, Italy, Sino-US trade relations in focus in the absence of releases; Fed’s Williams on the agenda

Monday’s calendar is empty of potentially market-moving releases, at least for FX markets. The focus during the day will be on major themes at play for some time now, for example Brexit.

On the data front, the NAHB housing market index out of the US is due at 1500 GMT, though this is not expected to affect the greenback. It should be kept in mind that the world’s largest economy will be on the receiving end of key housing market data on housing starts and existing home sales as the week unfolds.

Brexit headlines may again be the primary driver of FX moves during Monday’s trading. PM May’s Brexit plan doesn’t look like it will get parliamentary approval, while her leadership remains in the balance as well.

Elsewhere, euro traders will be eyeing any news relating to the EU-Italy budget standoff. Of note, European Economic Commissioner Moscovici will be holding a news conference in Rome at 1330 GMT.

Another theme having the capacity to steer market sentiment and thus positioning are developments having to do with the US-China trade spat. It is notable that last week’s APEC (Asia-Pacific Economic Cooperation) group meeting failed to agree on a communique for the first time in its history on the back of disagreements over trade between the US and China.

New York Fed President Williams, who holds permanent voting rights within the FOMC, will be participating in a discussion at 1545 GMT. His comments may attract more interest, given they come in the aftermath of some cautionary remarks by Fed vice chair Clarida and Dallas Fed President Kaplan. Meanwhile, ECB chief Draghi and executive board member Coeure will be participating in a Eurogroup meeting.

Lastly, the RBA will be releasing the official record of its November meeting at 0030 GMT. 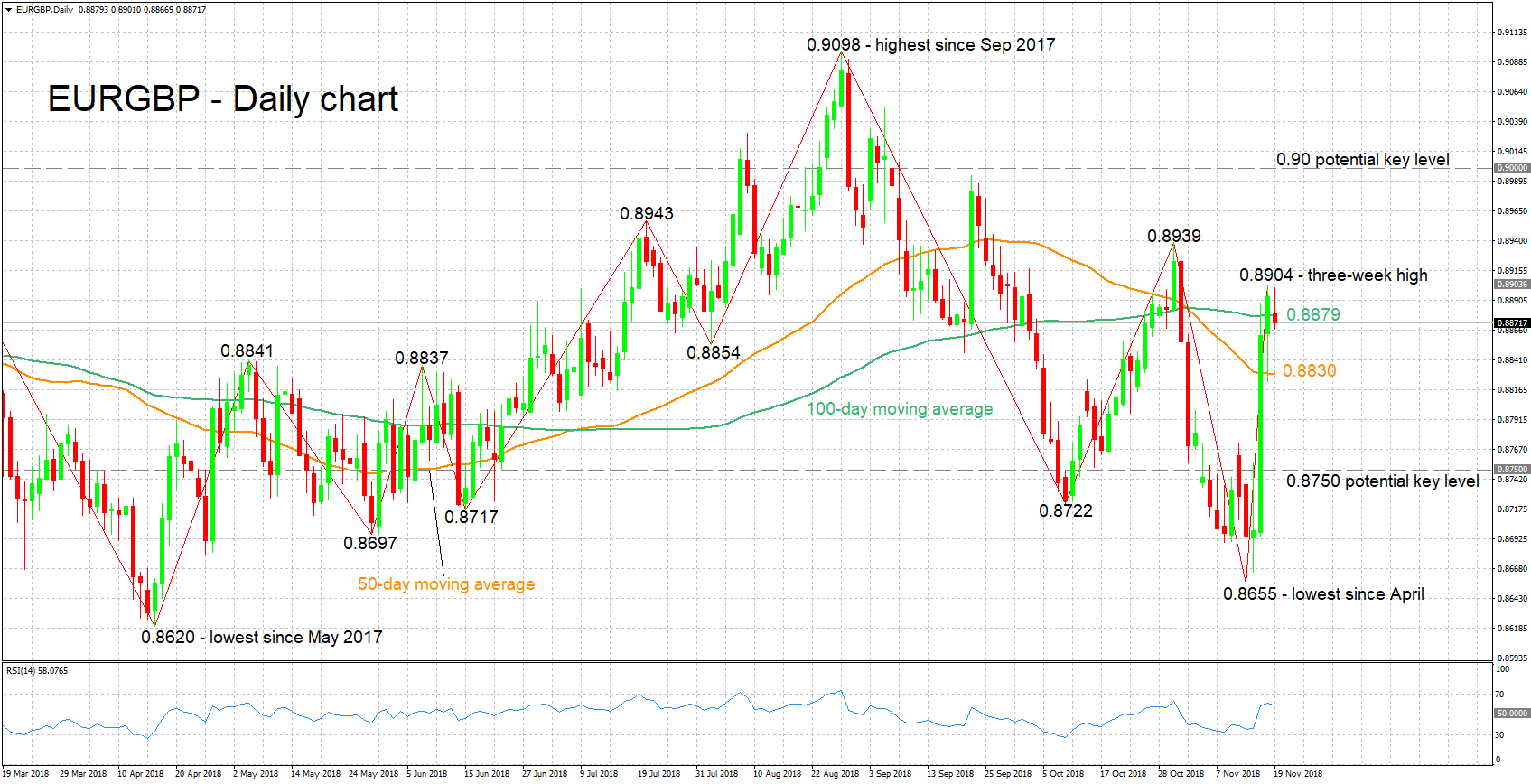 Technical Analysis: EURGBP momentum may be shifting to the downside

EURGBP’s surge during the latter part of last week that allowed it to rise to a three-week high of 0.8904 on Friday definitely turned the short-term momentum towards a bullish direction. The pair has eased a bit though since then, with the RSI remaining in bullish territory above 50 though reversing course to head lower; this may be an early sign of momentum shifting to the downside.

More Brexit uncertainty is expected to push the pair higher. Given a move above the current level of the 100-day moving average at 0.8879, resistance could occur around last week’s three-week high of 0.8904. Another peak at 0.8939 lies not far above with the area around it capturing the 0.8943 top as well. Higher still, a barrier to steeper gains may come around the 0.90 handle that may hold psychological importance.

On the downside and in the event of more clarity on Brexit, support could come around the 50-day MA at 0.8830; the zone around this encapsulates a couple of tops and a bottom from the past. Even lower, the region around 0.8750 which was congested between late April to late June would be eyed.

Developments relating to the EU-Italy budget dispute can also move the pair.