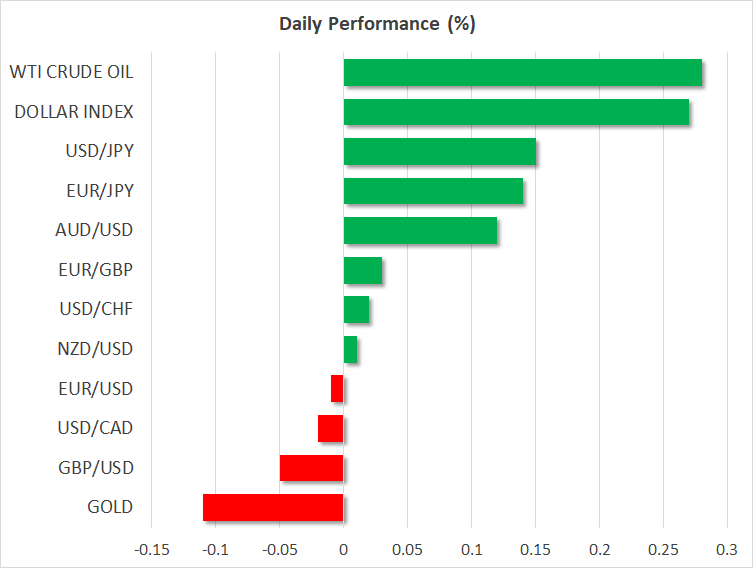 While the early European session on Wednesday was characterized by weakness in the US dollar following the midterms, that theme was quickly turned on its head, with the greenback recovering all its post-election losses to end the day higher. The catalyst was the broader risk-on environment that dominated, which triggered a rotation back into riskier assets like stocks, and out of safer ones such as bonds – thereby pushing the yields on US Treasuries higher and increasing the dollar’s carry appeal. Major US stock indices closed more than 2% higher, while 10-year US bond yields soared back to 3.23%, as the election uncertainty faded in the rear-view mirror.

Sterling was once again a winner, outperforming all its major peers outside of the antipodeans, aussie and kiwi, as Brexit optimism remained front and center. The latest reports keep playing up the prospect of an imminent breakthrough, suggesting the UK government has nearly prepared a compromise proposal that may be presented to the EU soon. While an agreement indeed appears to be inching closer, the reality is that any deal will also need to be approved by the UK Parliament, which may be much trickier than it seems at first glance, implying that lots of twists and turns likely remain before the Brexit saga concludes.

Elsewhere, the aussie and the kiwi reaped the gains of the broader risk-on atmosphere, climbing to multi-week highs against the dollar. Stronger-than-expected Chinese trade data overnight may have helped as well. Separately, another potential source of support for these high-yielding currencies may have been speculation the US-China trade conflict is set to fizzle out soon. This, on expectations the US administration will take a step back from potentially damaging policies now that it can’t rely on Congress for more stimulus to support the economy. In New Zealand, the RBNZ meeting overnight did not deliver anything new, with policymakers maintaining a neutral tone and reiterating that rates can move in both directions. 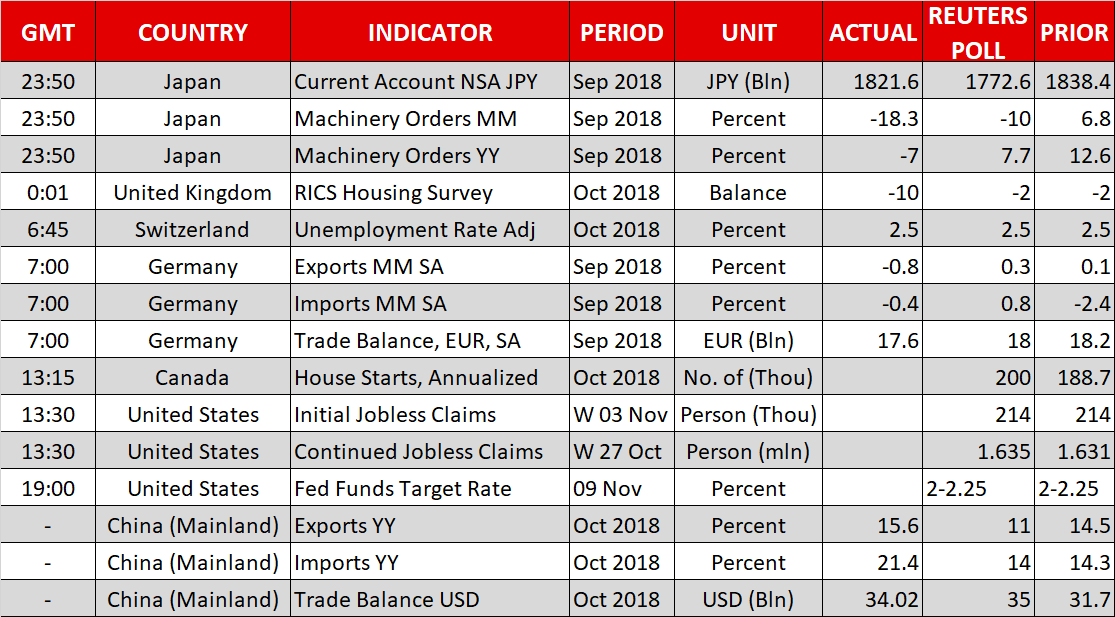 The Federal Reserve policy decision is the highlight on Thursday’s calendar, which either way is rather light.

Canadian housing stars for October are slated for release at 1315 GMT, with weekly jobless claims data due out of the US at 1330 GMT. However, all eyes will be on the Fed meeting, the penultimate one for the year.

The US central bank is widely anticipated to maintain rates at current levels, with the focus falling on signaling for policy tightening moving forward. The rate decision and accompanying statement will be made public at 1900 GMT. The Bank has in the past telegraphed a rate hike in December, and that is likely to continue being the case. Communication for 2019 – how hawkish will the Fed be – will likely prove of importance in terms of dollar movements. Relating to this, overall robust data out of the US will possibly tilt things towards the hawkish side of the spectrum, something which is greenback-positive.

Any comments on global trade – the dispute between the US and China – out of the Fed will also attract interest. Elsewhere, there were some concerns that the stock market selloff during October could derail the Fed’s rate path, bringing to the fore the Bank’s unofficial mandate of financial stability. That’s unlikely to be the case though, especially in light of equity gains from later October onwards which have pushed benchmarks such as the S&P 500 back into positive territory in 2018.

Note that no new forecasts or dot plot are due out of the Fed today, while this is also the last meeting with no press conference, given the changes announced earlier in the year by chief Powell.

Remaining themes in the markets that can lead to sharp movements in sterling and euro pairs are Brexit and the prospect of a clash between the EU and Italy over the latter’s spending plans.

ECB head Draghi will be making a public appearance at 1520 GMT, with the Bank’s policymakers Coeure (1415 GMT) and Nowotny (1600 GMT) also being on the agenda.

In equities, Disney will be releasing quarterly results after the market close. 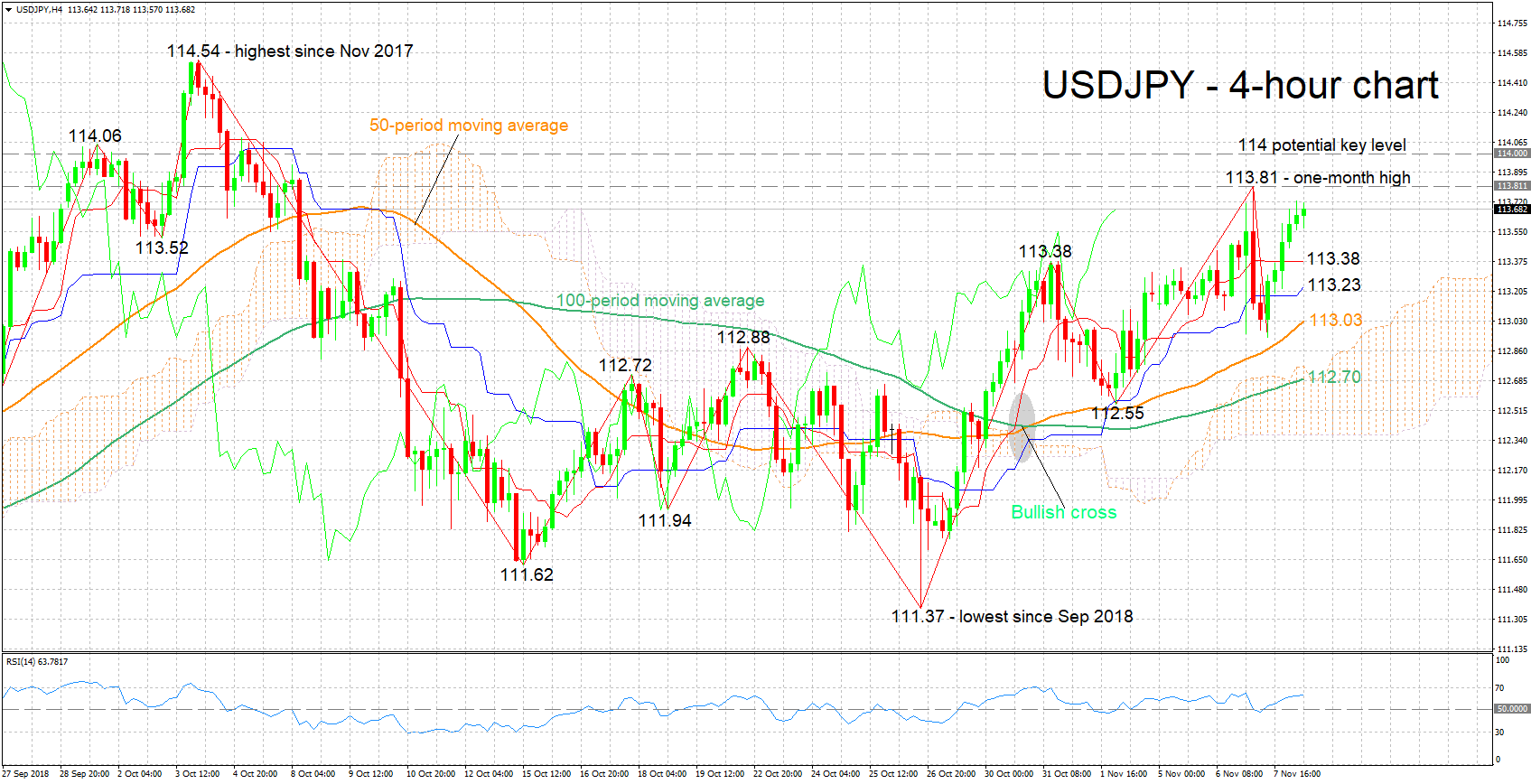 USDJPY is edging closer to Wednesday’s one-month high of 113.81. The Tenkan- and Kijun-sen lines are positively aligned in support of a bullish bias in the short-term. Adding to this, the RSI is rising in bullish territory.

A relatively hawkish Fed is likely to boost the pair, with immediate resistance possibly taking place around yesterday’s one-month peak of 113.81. Not far above lies the 114 handle, with the area around it capturing a top from the recent past at 114.06. Higher still, the pair’s highest since November 2017 of 114.54 would be eyed, with an upside violation shifting the attention to the 115 mark.

On the downside and in case of a cautious Fed, support could occur around the Tenkan- and Kijun-sen lines at 113.38 and 113.23 respectively. Close below is the 50-period moving average at 113.03, and then the 100-period one at 112.70; the Ichimoku cloud top also roughly coincides with the 100-period MA, while the region around it captures numerous tops and bottoms from previous weeks.