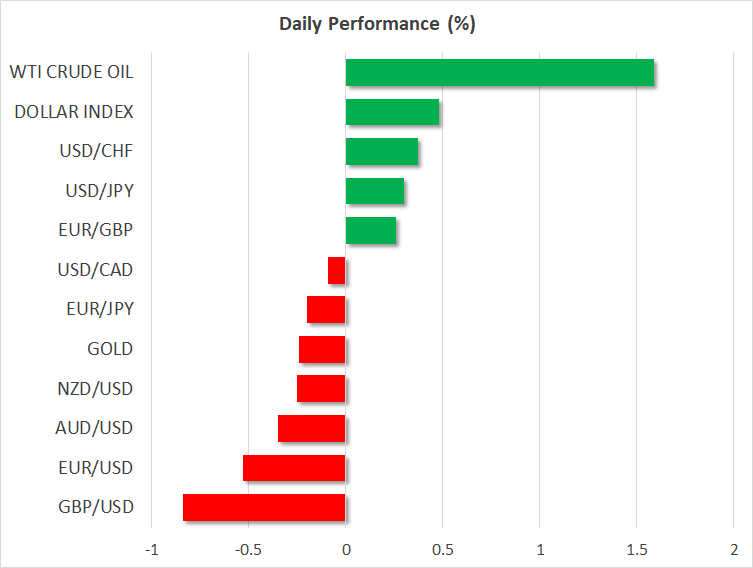 It was an eventful session in FX markets, with the dollar index cruising to 16-month highs earlier on Monday, even in the absence of any substantial news out of the US – mostly capitalizing on weakness in the pound and euro. The surge in the greenback amid the volatile market conditions lately underscores the role it has assumed in recent months as an “all-weather currency”. Namely, it can outperform both in a risk-off setting like the one on Friday given its defensive status as the world’s reserve currency, and amid a risk-on environment as well, considering its carry appeal relative to all other G10 currencies. Put differently, the dollar seems to be enjoying a spell of “there is no viable alternative” at the moment.

And with good cause, considering that downbeat headlines continue to haunt both the pound and the euro. In the UK, sterling/dollar opened with a negative gap and is now more than 100 pips from its close on Friday, after UK press reported that several ministers in PM May’s government are ready to quit over Brexit. The takeaway is that if May cannot agree on a way forward with her own ministers, then pushing any Brexit deal she brokers through Parliament may be a herculean task, as half of her own party members and most of the opposition Labour party may vote it down. Hence, price action in sterling is likely to remain hostage to incoming headlines and choppy overall, with the prospect of a near-term breakthrough in the talks looking increasingly more remote.

In euro land, the Italian budget saga continued to dampen sentiment, with the EU giving Rome until Tuesday to present a revised budget with more “realistic” growth estimates. While Deputy PM Salvini said the EU wouldn’t be happy with Italy’s reply, Italian press over the weekend reported his government is aiming to reach a deal. In case Italy does revise its budget plans in a more diplomatic direction tomorrow, then the battered euro – which touched a 16-month low versus the dollar today – could see some relief.

Monday’s calendar is practically empty of important releases, with Brexit and other political developments, namely the Italian-EU budget standoff, being eyed by traders.

Sterling is trading roughly 300 pips below last week’s high of $1.3174, as previous optimism over a Brexit deal was replaced with uncertainty and potentially even more minister departures from PM May’s government, according to reports by the Sunday Times. The British currency is again expected to remain “hostage” to any headlines on the matter, ahead of key UK data as the week unfolds.

Euro pairs are likely to prove sensitive to news having to do with Italy’s budget plans ahead of tomorrow’s deadline for the country to submit revised spending plans that would align with EU fiscal rules. The Italian government has so far been pushing forward its own arguments, unwilling to give in to EU demands. A clash between the two sides is expected to prove euro-negative, at least in the near term.

ECB Vice President de Guindos is scheduled to give a speech at the opening conference of the 21st Euro Finance Week in Frankfurt at 1000 GMT. Elsewhere, San Francisco Fed President Daly, a voting FOMC member in 2018, will be talking on the US economy’s outlook at 1930 GMT.

It is of note that US bond markets will be closed on Monday due to the Veterans’ Day holiday.

EURUSD is trading in proximity to its lowest since June 2017 of 1.1256 hit moments ago. The Tenkan- and Kijun-sen lines are negatively aligned, supporting the view for a negative bias in the short-term. The RSI, which is declining, is also acting as a testament to the bearish momentum in place. Notice though that the indicator is below the 30 oversold level, suggesting that the selloff may be overstretched.

More worries over an Italian-EU standoff are likely to push the pair even lower. Support to declines may come around the 1.12 round figure, with the 1.11 handle being eyed in case of steeper losses.