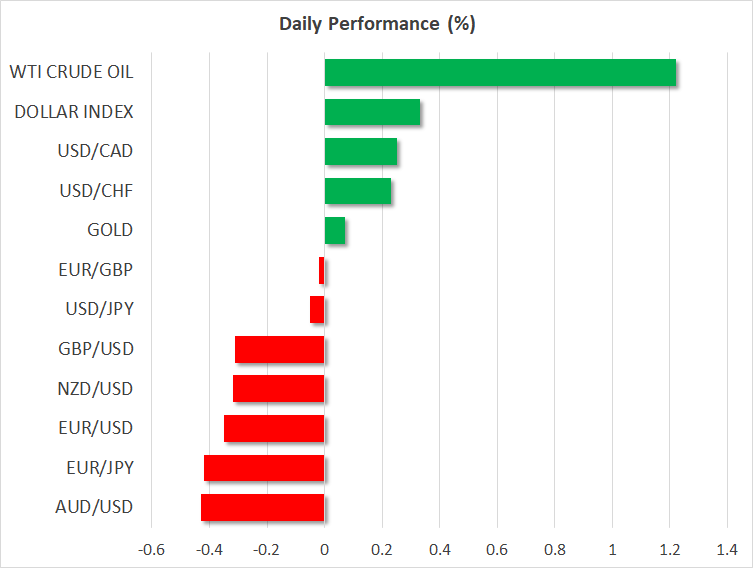 As was universally expected, the Fed raised interest rates by 25bps yesterday, delivering few fresh signals on policy. The dollar tumbled immediately on the decision, as policymakers removed from the statement a sentence that previously read “policy remains accommodative”, generating worries that the pace of hikes may slow moving forward. However, the US currency quickly recovered to trade almost unchanged after Chair Powell downplayed the change as merely cosmetic. He also didn’t appear too worried about the escalation in trade tensions, indicating that it’s a risk, but that the Fed doesn’t see adverse effects in the numbers yet.

In terms of the rate projections, while the “median” dots remained unchanged to signal another hike in 2018 and three more in 2019, there was greater confidence on these forecasts among officials. As for economic forecasts, GDP growth for 2018 and 2019 were revised higher, while inflation for 2019 was marked slightly lower. Overall, there was nothing shocking out of this meeting, a fact reflected by the subdued reaction in the dollar and the nearly-unchanged market pricing for a December rate hike (still roughly 80%). The Fed remains committed to raising rates in a gradual manner amid a fiscally-turbocharged US economy, and trade risks are not dire enough yet to derail – or even delay – the central bank’s normalization efforts.

Euro/dollar spiked up on the decision, almost touching the 1.1800 zone, but then fell back to 1.1740 once the press conference commenced. Several hours later, during the early European session on Thursday, the pair fell even further towards the 1.1700 handle – this time on euro weakness. Italian-budget worries came back to haunt the single currency, which took a hit on news that the much-anticipated budget may be delayed amid “complications” on reaching a consensus on the deficit. Concerns around a potential Italy-EU standoff over budget deficit limits will likely keep a risk-premium on the euro, and perhaps risk-sensitive assets in general, until there is some greater clarity on the situation.

Overnight, the RBNZ kept its policy unchanged, reiterating that the next move in interest rates could be both up or down, implicitly keeping a rate cut on the table. The Bank maintained a cautious-to-neutral tone overall, indicating that there are signs of “core inflation rising”, but “downside risks” to growth linger. Given the lack of fresh signals, there was little reaction in the kiwi. 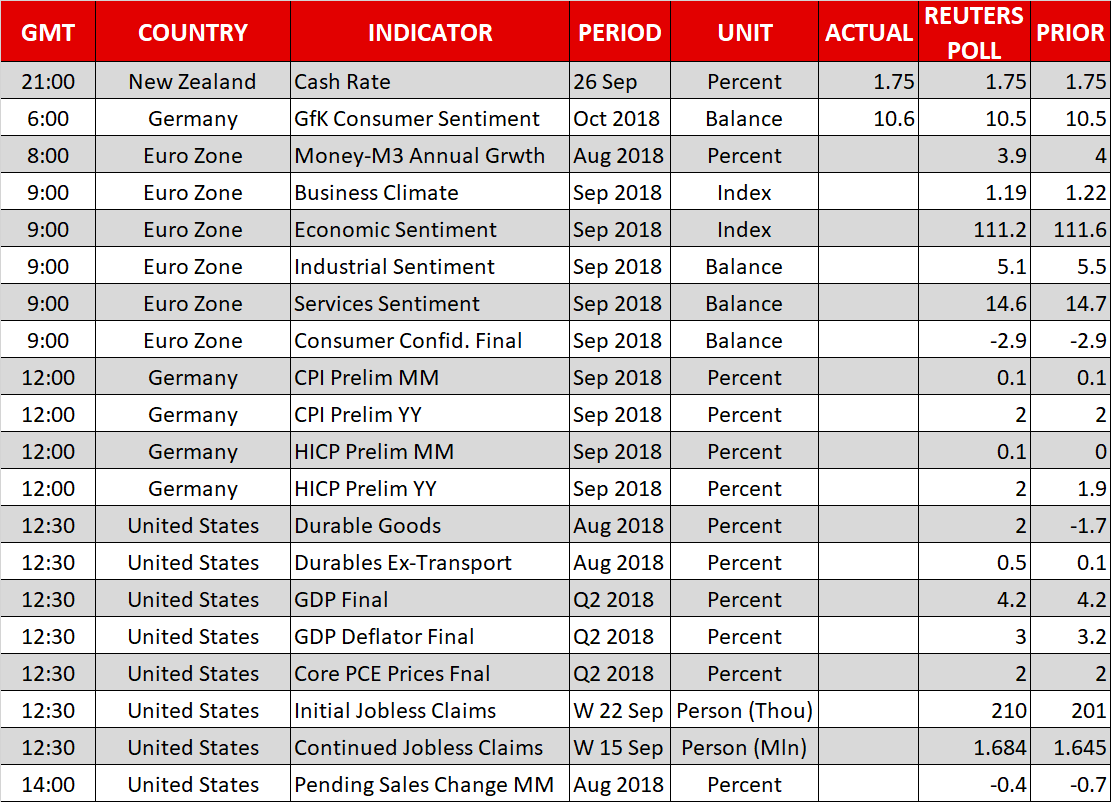 Numerous surveys gauging business sentiment in the eurozone during September are due out at 0900 GMT, all of which are expected to show a slight deterioration in morale relative to August; rising trade tensions have weighed on survey results in the past. Meanwhile, eurozone consumer confidence data due at the same time are projected to confirm the preliminary release which saw the relevant index coming in at -2.9 in September, its lowest since May 2017. For comparison, the US Conference Board’s consumer confidence index for September released on Tuesday jumped to a fresh near two-decade high.

Having greater potential to drive euro pairs will be September flash inflation readings out of Germany at 1200 GMT. Month-on-month, CPI growth is expected to remain at 0.1%, which would leave the year-on-year pace of expansion unchanged at 2.0%. The harmonised figures (HICP), that use a common methodology across EU countries, will also be watched. It bears mention that the numbers come one day ahead of the eurozone’s preliminary prints on September inflation and traders may thus use today’s figures to speculate on tomorrow’s euro-wide release, positioning themselves accordingly.

Also euro-important will be deliberations for Italy’s budget, with reports suggesting that a meeting on the country’s 2019 budget plan will be postponed.

Out of the US, data are anticipated to show durable goods orders rebounding to grow by 2.0% m/m in August, after contracting by 1.7% in July. Growth in the core measure of durable goods that excludes transportation items is forecast to stand at 0.5% m/m, faster than July’s 0.1%. The prints are due at 1230 GMT, the same time as final Q2 GDP figures which are expected to confirm the annualized pace of growth at 4.2%. Also out at 1230 GMT will be Q2’s final GDP deflator and core PCE prices. Weekly jobless claims data will be hitting the markets at the same time as well, while August’s pending home sales will be released at 1400 GMT.

Elsewhere, Turkish President Erdogan will be visiting Germany, where he will also meet Chancellor Merkel in an effort to restore ties and improve relations between the two nations; the two will be speaking to reporters tomorrow. 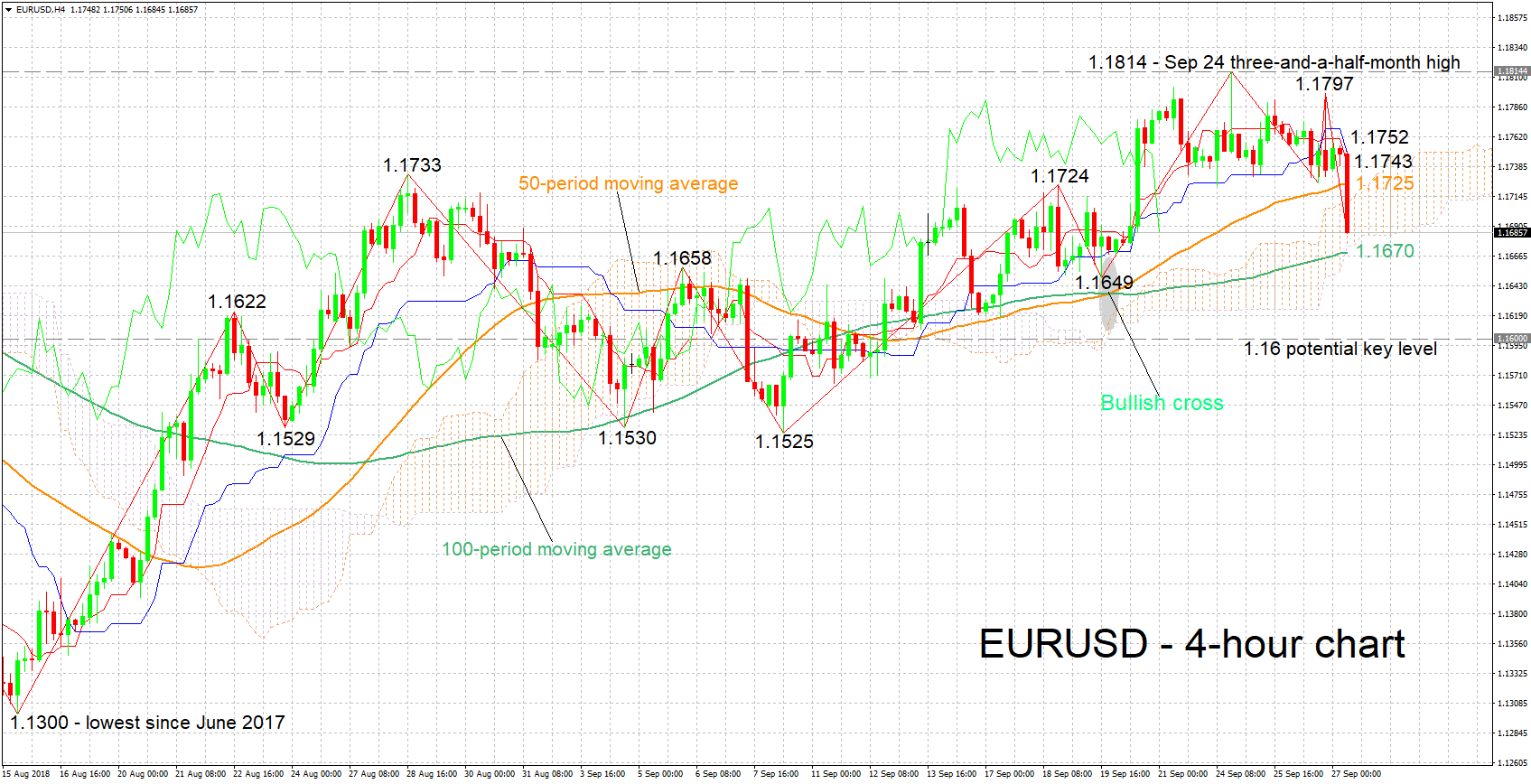 EURUSD touched a one-week low of 1.1684 earlier on Thursday, while trading activity continues to take place near this trough. The Tenkan-sen moved below the Kijun-sen, signaling bearish momentum.

Stronger-than-expected German inflation numbers may boost the pair. The region from 1.1714 to 1.1752 includes the Ichimoku cloud top, the current level of the 50-period moving average line, and the Tenkan- and Kijun-sen lines, and may thus prove of significance, acting as resistance to gains. Further above, the area around the three-and-a-half-month high of 1.1814 would increasingly come into view.

On the downside and in case of a data miss, immediate support could occur around the 100-period MA at 1.1670; this is where the Ichimoku cloud bottom lies too. Steeper losses would bring into focus the zone around the 1.16 round figure which was congested between late August to mid-September.

Italian budget developments can well move the pair as well, while it should be kept in mind that US data are due later in the day.