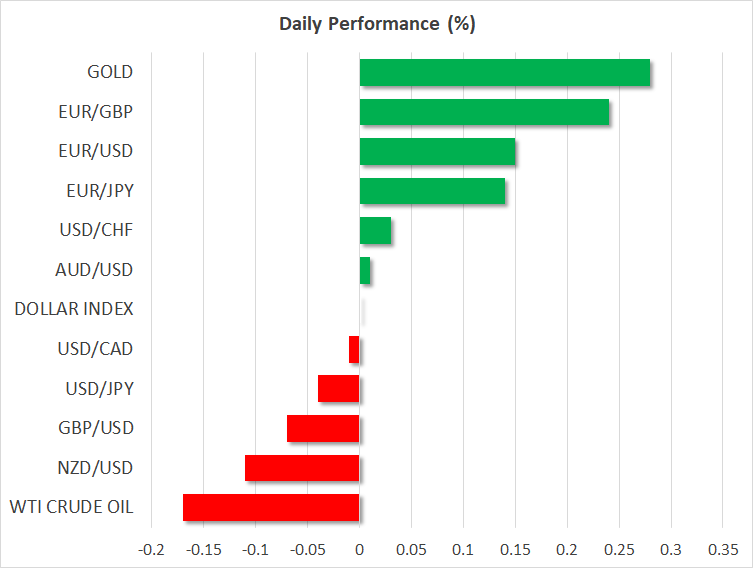 The US currency is headed for its third straight day of sharp losses against a basket of currencies as traders continue to price in an increasing probability that the Federal Reserve will be forced to cut interest rates later this year. The yield on 10-year Treasury notes tumbled to a 21-month low of 2.061% yesterday, while the two-year yield, which tends to follow the Fed funds rate closely, fell as low as 1.812%, widening the gap with the Fed funds target range of 2.25-2.50%.

The dramatic moves in Treasury yields reflect growing expectations that the Fed will soon embark on an easing path. St. Louis Fed President James Bullard fuelled such bets yesterday, becoming the first Fed official to signal a cut, saying “A downward policy rate adjustment may be warranted soon to help re-center inflation and inflation expectations at target”. This puts even more focus on Fed Chairman Jerome Powell’s remarks when he speaks later today at the Fed Listens Conference in Chicago at 13:55 GMT.

The dollar was last trading near 5-month lows versus the yen at just below the 108 level, while the dollar index was struggling to hold onto to the 97 level. The weaker greenback was a boon for the struggling euro, helping the single currency climb to more than one-month high of $1.1277. However, the euro’s gains were capped by ongoing worries of another clash between Italy and the EU as the European Commission considers whether to begin disciplinary procedure against the country over its high budget deficit.

Gold has been another winner during the greenback’s freefall, with the precious metal hitting a 3-month high of $1328.69 an ounce today. The commodity could be in line for even steeper gains should the Fed begin to signal a rate cut and US yields decline even lower.

Tech stocks under pressure from US antitrust probe

Global stocks remained on the backfoot amid the deepening trade row with China and possible US tariffs on Mexico. Adding to the gloomy outlook was a worse-than-expected ISM manufacturing PMI out of the US yesterday. The closely watched manufacturing activity gauge recorded its weakest reading in May since October 2016, heightening fears about a slowing US economy.

Making matters worse for the equities market was a widening antitrust probe by US authorities on Wall Street’s tech giants. The Federal Trade Commission and the Department of Justice are reportedly examining whether to start formal investigations into Facebook, Amazon, Apple and Alphabet’s Google.

Shares of all four companies plummeted overnight in US trading, sending the Nasdaq Composite to its lowest close in four months. The tech-heavy Nasdaq is now officially in correction territory, having fallen more than 10% from its record high in late April following yesterday’s losses.

As expected, the Reserve Bank of Australia cut its cash rate to an all-time low of 1.25% today, hoping to boost stubbornly low inflation and softening growth. However, although the RBA kept the door open for further rate cuts, it failed to provide clear signals on the future rate path. This fell short of expectations of a more dovish RBA by many traders and the aussie quickly bounced back after a small dip following the announcement to rise to a three-week high of $0.6993.

The New Zealand dollar also advanced against the greenback to briefly top the $0.66 level, while the Canadian dollar firmed to around C$1.3430 per US dollar as oil prices stabilized from the recent sharp drops.

Coming up later today, flash inflation figures from the Eurozone will be important ahead of the ECB policy meeting on Thursday, and April factory orders will be watched in the US for more possible signs of a slowdown. 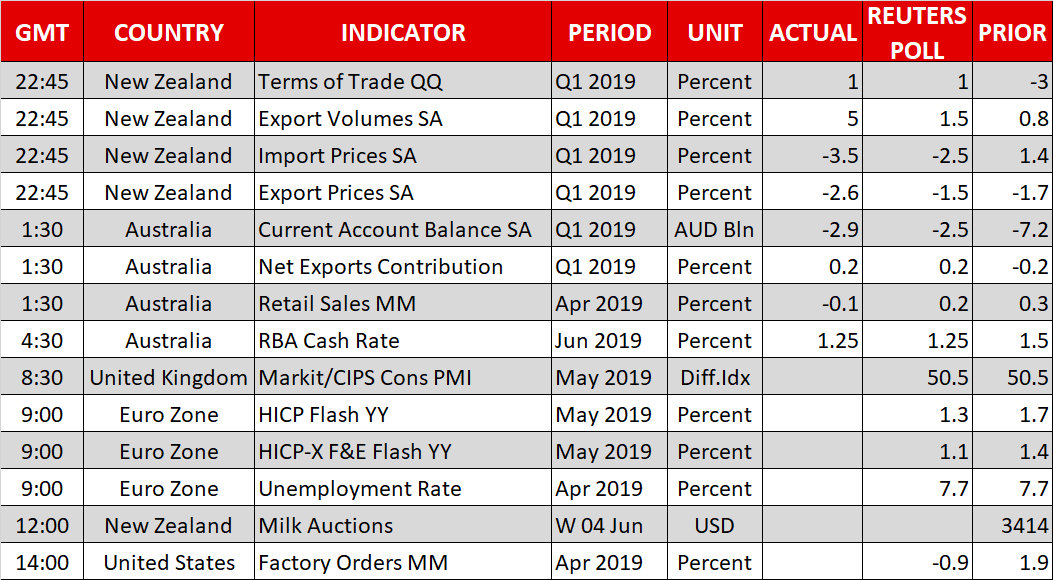