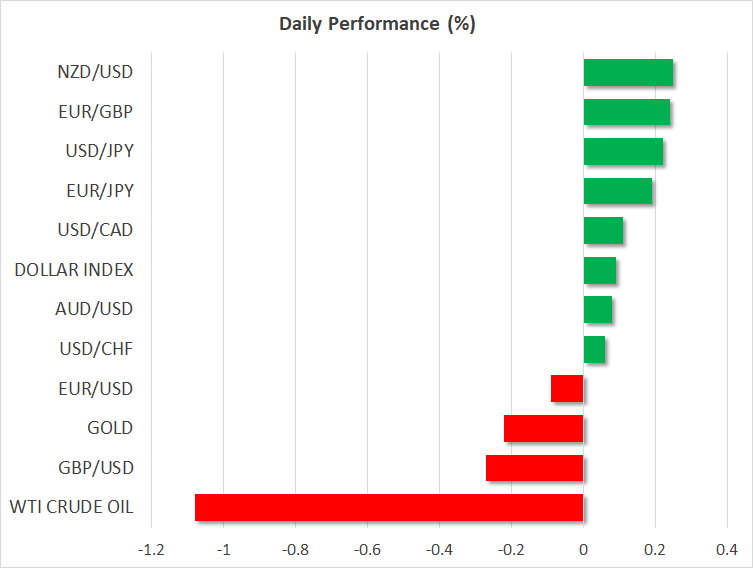 The dollar advanced for a 7th straight session against a basket of currencies on Friday, albeit only modestly, as investors sought the security of the world’s reserve currency amid concerns around the health of the global economy and the outlook for trade. Attesting to this risk-off mood, the defensive Japanese yen outperformed all its major peers outside of the loonie, which was propelled higher by robust employment data out of Canada. Meanwhile, the major US equity indices were mixed, but little changed overall.

It will be a deciding week for the trade saga, and thus for risk appetite in general, as the US negotiating team – led by Secretary Mnuchin and Trade Representative Lighthizer – has arrived in Beijing for another round of talks. This comes after President Trump said recently that he won’t meet President Xi this month after all, pouring cold water on hopes for a swift resolution to the dispute. Still, this may be yet another “hardball” US negotiating tactic aimed at generating leverage, implying that an eventual deal still seems like the most probable scenario, though the risk of a delay beyond the March 1 deadline has risen markedly.

Also keep an eye on US politics, as reports suggest another government shutdown may be looming as early as Friday, after talks on border funding broke down. While investors typically remain oblivious to shutdowns as they see through the ‘political theater’, the more frequent they become, the greater the impact on the real economy and by extent on markets via the uncertainty channel.

The Swiss franc nosedived as markets opened on Monday, falling by more than one big figure versus both the dollar and the euro within a few minutes, but jumped right back to recover all its losses almost immediately. Since there were no material news during the early Asian session, the move seems owed mainly to some large orders being executed in an environment of very thin liquidity. Remember that Chinese investors returned today after an entire week of being on holiday, and so may have had several older orders pending, while Japanese markets were closed on the day, exacerbating the illiquidity.

UK GDP figures on the docket; Brexit always in the background

The highlight on the economic calendar today will be the preliminary estimate of UK GDP for Q4. The UK economy has clearly shifted down gears as political uncertainty saw business investments collapse, and the latest PMIs for January suggest this weakness has carried over – and even became more pronounced –  in the new year.

More importantly, for the pound at least, will be any developments on the Brexit front. On Thursday, the UK Parliament will vote on an amendable statement, which means lawmakers will have another chance of taking more control over the Brexit process, for instance by requiring the government to ask for an extension of Article 50, delaying the exit date. This is probably the best-case scenario for sterling, and if it materializes could provide some support in the near term, as any meaningful concessions from the EU on the Irish backstop remain highly unlikely.