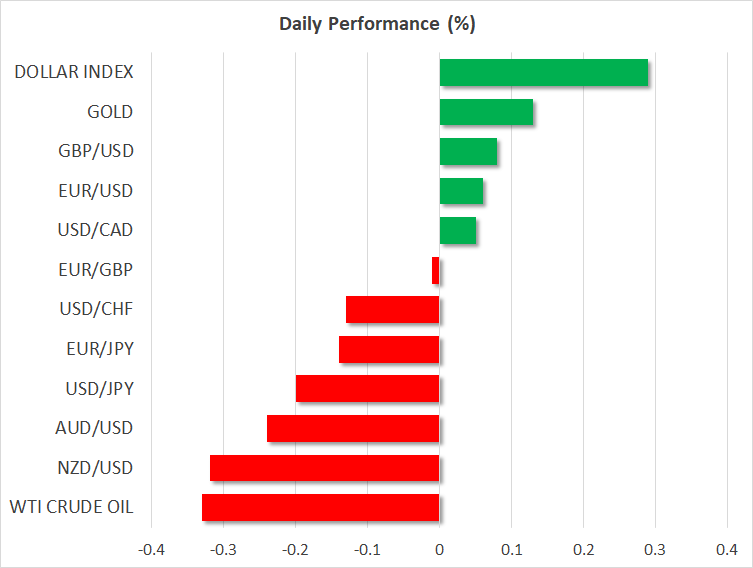 The dollar outperformed all major currencies on Wednesday, buoyed by US bond yields rising to multi-year highs. Yields on 10-year US treasuries soared to 3.23%, a high last seen in 2011, amplifying the greenback’s allure. The moves were powered initially by a set of robust data releases, which confirmed the US economy continues to fire on all cylinders.  The ADP employment report for September beat expectations, while the ISM non-manufacturing PMI for the same month surged by much more than anticipated, reaching its highest since the index was created in 2008.

Some relatively hawkish comments from Fed chair Powell a few hours later added fuel to the surge in the dollar. He said the Fed may have to raise rates past levels considered “neutral” to restrain inflation, and that we are still a long way from even reaching “neutral”. While neither comment was particularly new, investors still took the opportunity to price in a greater degree of tightening in 2019. Against this backdrop, dollar/yen skyrocketed to a fresh 11-month high of 114.50, as improved risk appetite in markets also weighed on the yen.

Euro/dollar pared earlier gains to close the session much lower as the dollar advanced, breaking below the key 1.1500 juncture, to stabilize around 1.1480. The euro’s losses came even despite encouraging news from Italy, where the government confirmed it will lower its budget deficits in the comings years, helping to calm concerns of an imminent clash with the EU. With Italian concerns fading for now, at least until the government releases the details of its budget, risk sentiment was boosted – triggering a rotation out of bonds (hence higher yields) and into equities.

In the UK, there was little of note in PM May’s remarks at the Conservative party conference. Now, the focus turns back to the talks, which are expected to resume this week. Media reports have floated potential “compromises” by both sides recently, and it will be crucial to see which of those turn into formal proposals.

Elsewhere, the antipodean currencies got slammed amid the dollar’s resurgence, with the aussie and kiwi being the worst performing G10 currencies, each losing around 1.2% against the greenback on Wednesday. Aussie/dollar and kiwi/dollar softened on Thursday too, both touching fresh 2½-year lows.

Thursday’s a quiet data day, with US factory orders attracting some interest; even those do not typically act as a major market mover. In the absence of anything major on the economic calendar, updates relating to Italian politics and Brexit will be monitored.

According to a government spokeswoman, details relating to economic growth projections that would support Italy’s budget plans will be published today. After much controversy and rising odds for an Italy-EU clash, the country’s budget deficit target for 2019 is at 2.4%, while it pledged to reduce it to 2.1% in 2020 and 1.8% in 2021.

In the UK, any Brexit updates following the Tory Party Conference will be closely watched; should hopes for a breakthrough from the current deadlock in negotiations rise, then sterling is likely to post a relief rally.

On the data front, US factory orders are scheduled for release at 1400 GMT. A rebound is forecast in August, with orders expected to grow by 2.1% m/m, after contracting by 0.8% in July on the back of subdued aircraft demand. Weekly jobless claims data out of the nation are due earlier in the day (1230 GMT).

Canada’s September Ivey PMI is also due at 1400 GMT.

ECB policymaker and Bank of Finland Governor Olli Rehn will be talking about monetary policy and the global economic situation at 0800 GMT. Other policymakers on the agenda are the ECB’s Nouy (0930 GMT) and Coeure (1400 GMT), as well as the Fed’s Quarles (permanent FOMC voting member – 1315 GMT). 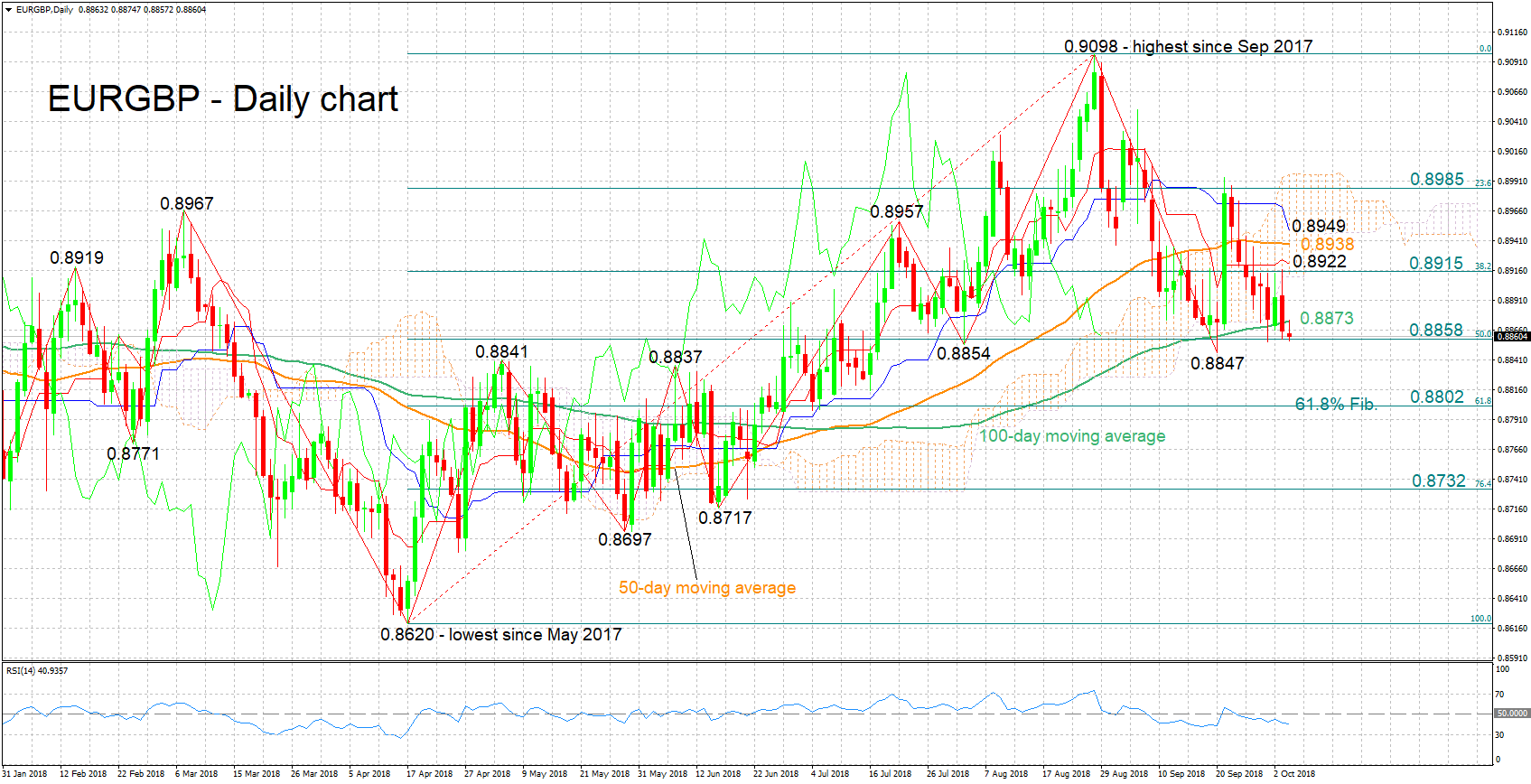 EURGBP only managed to finish higher in two of the eight preceding trading days. At the moment, the pair is trading not far above 0.8847, this being September 20’s two-and-a-half-month low. The Tenkan- and Kijun-sen lines are negatively aligned in support of a bearish short-term picture. The RSI, which has been declining overall since late September, also lends credence to the view for a negative bias, though notice that it does not maintain a steep negative slope; negative momentum may be weakening.