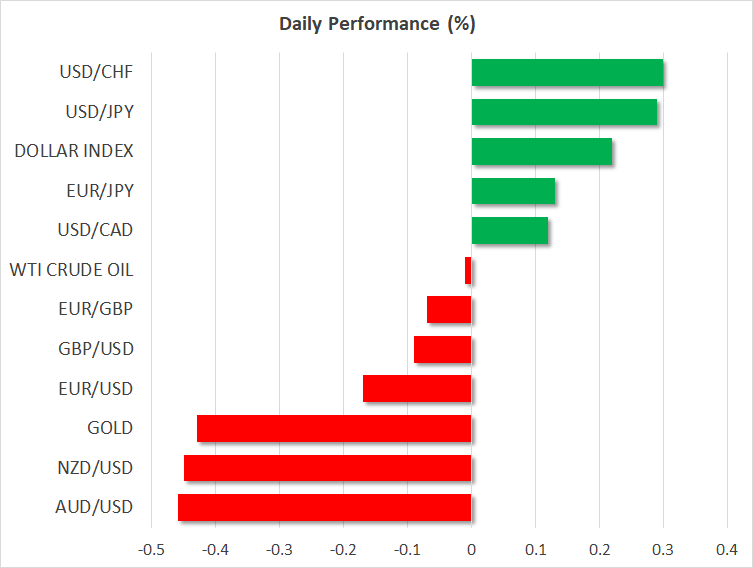 The dollar index is 0.2% up on Wednesday, staying elevated near the four-month high of 91.10 it posted on Monday, supported by sustained advances in US Treasury yields. Earlier today, the yields on 10-year Treasuries broke above the widely touted 3.0% psychological level, and have remained above it since. Higher US bond yields tend to lift the dollar, as they induce investors to increase their exposure to that currency. It will be most interesting to see whether the dollar index can break above the 91.10 zone soon, as that is the upper bound of the sideways range it has been trading in since mid-January, and a move above it would turn the technical picture to cautiously positive.

Meanwhile, US stocks suffered as bond yields rose. Rising yields typically weigh on demand for equities, as bonds become more attractive to hold relative to stocks. The fact that the borrowing costs of companies rise as well in such an environment, diminishing their ability to buy back their own stocks, also plays a major role.

Elsewhere, the antipodean currencies – the aussie and the kiwi – continued to suffer. Both are 0.45% lower against the greenback today, extending the significant losses they posted recently. Fundamentally, both currencies appear to be battered by diminishing expectations for any rate increase by either the RBA or the RBNZ this year, following relatively soft data on inflation out of both Australia and New Zealand lately. The dollar’s latest rebound, combined with some key technical breaks to the downside, may have amplified the selloff.

Day ahead: Raft of corporate earnings and EIA oil report on the agenda

With the rest of the day practically empty of country-specific releases out of major economies, the focus might turn to corporate earnings and the Energy Information Administration’s weekly report on crude stocks.

On a busy corporate-earnings day, some of the big names reporting results include AT&T, Boeing, Comcast, eBay, Facebook, Ford and Twitter. Boeing, Comcast and Twitter will publish their results before the US market open, with all other earnings reports scheduled for announcement after the closing bell on Wall Street.

Major US equity indices recorded a considerable drop on Tuesday, as warnings by perceived-bellwether companies – perhaps most notably Caterpillar – of higher costs on the back of rising yields weighed on equity market sentiment. It would be interesting to see to what extent this narrative plays out today, diverting to some extent the attention from corporate releases and into the bigger picture for the stock market. How Treasury yields evolve today, and in the days to come, can also add fuel or remove steam out of this story.

The EIA’s report on US crude oil inventories for the week ending April 20 due at 1430 GMT will be of interest to traders of the precious liquid which is trading around levels last seen in late 2014. Crude stocks are anticipated to decline by 2.0 million barrels, posting their second straight weekly drawdown. In the previously recorded week, they fell by 1.1m barrels.

An appearance before the Senate Standing Committee on Finance by Bank of Canada Governor Stephen Poloz and Senior Deputy Governor Carolyn Wilkins is on the agenda at 2015 GMT. 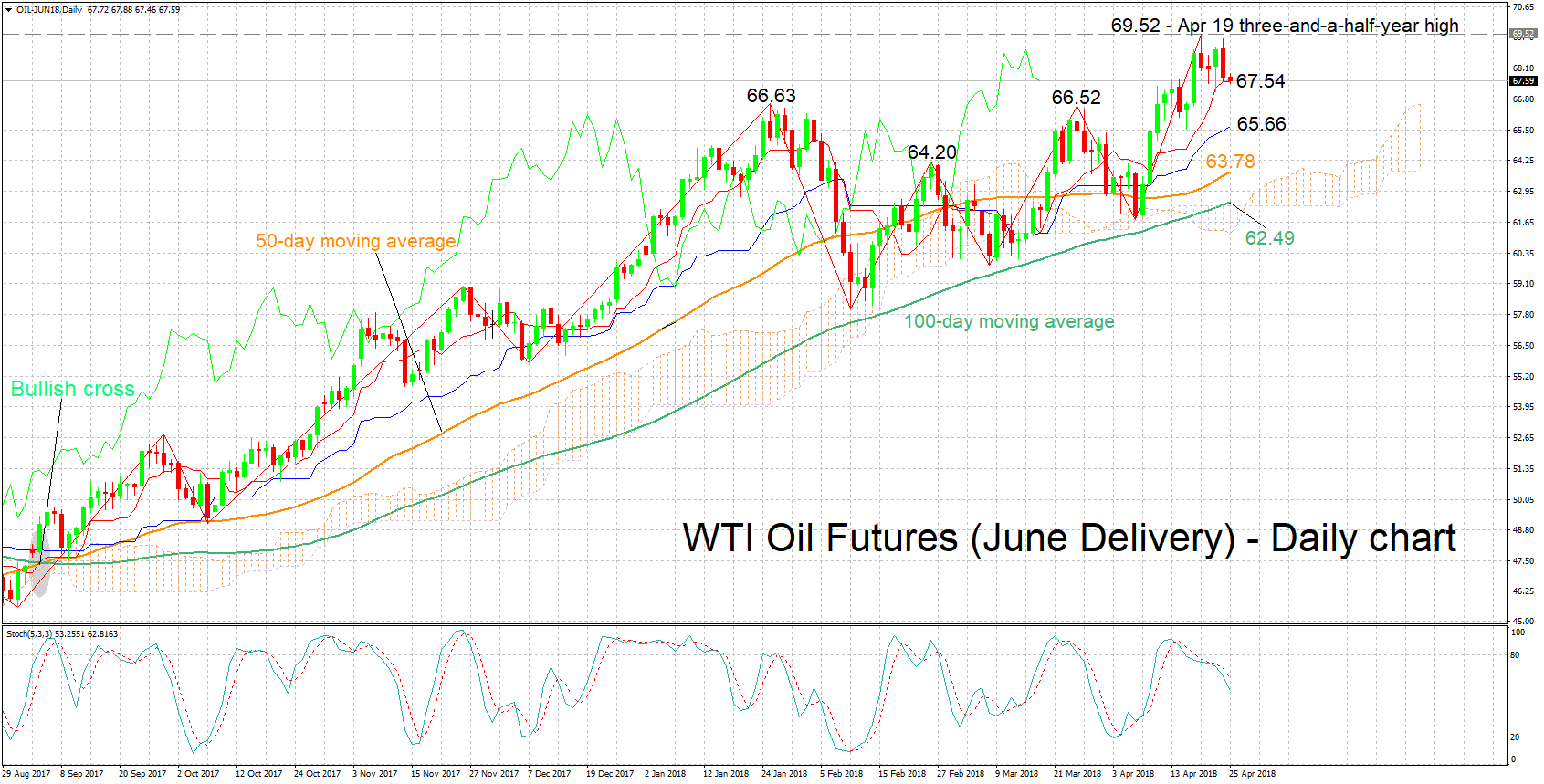 WTI oil futures for June delivery have fallen a bit after touching a three-and-a-half-year high of 69.52 on Thursday (yesterday they came close to revisiting that peak). The positively aligned Tenkan- and Kijun-sen lines are projecting a bullish picture in the short-term, though notice that the former has flatlined and the latter is not as steeply sloped as previously; positive momentum may be easing. Moreover, the stochastics are giving a bearish signal in the very short-term: the %K line has moved below the slow %D one and both lines are heading lower.

Should today’s EIA report show a larger-than-anticipated drawdown in crude inventories, then the bullish bias in the short-term may be refueled. Resistance to advances could come around last week’s three-and-a-half-year high of 69.52 and the 70 round mark. A violation of the latter may pave the way for stronger gains.

On the downside and in case of a smaller-than-expected drawdown in crude stocks (or a buildup), support could come around the current levels of the Tenkan- and Kijun-sen lines at 67.54 and 65.66 respectively; the Tenkan-sen is tested at the moment. A couple of peaks – at 66.63 and 66.52 – lie between the two lines as well.