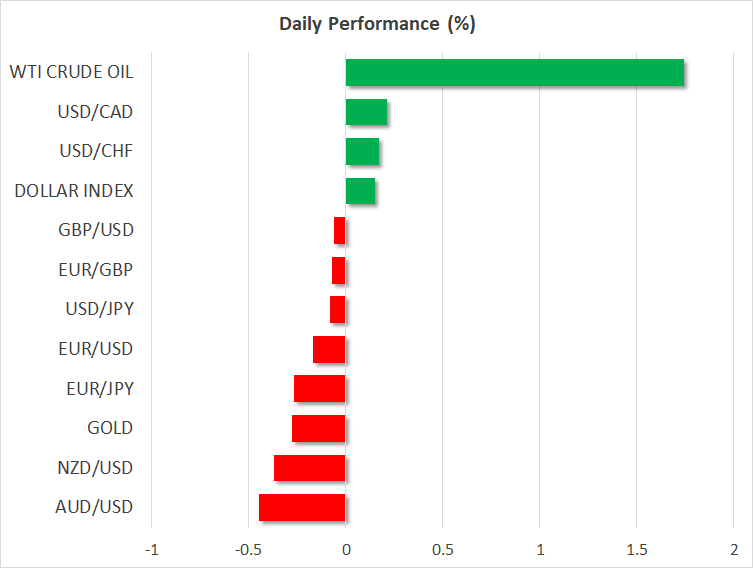 Investors were taken by surprise over the weekend, after news hit the wires that China would cancel the trade talks with the US that were planned for this week. With the tariffs the two sides announced recently due to take effect from today as well, this development likely cast some doubt on the narrative that the Sino-American trade skirmish will be resolved in a diplomatic manner anytime soon. Separately, media reports suggest the US government is preparing to launch a major “administration-wide broadside” against China over the coming weeks, meaning a fierce verbal attack on several issues.

Risk appetite soured as investors turned more defensive, with safe-havens like the Japanese yen as well as the dollar trading higher to start the week. Meanwhile, US equity futures are pointing to a notably lower open today, while risk-sensitive currencies such as the aussie and kiwi are on the back foot once again. In the grand scheme of things, China seems unwilling to negotiate “with a gun pointed to its head”, while the US administration looks set to ramp up the pressure on the Asian nation even further in the near-term, ahead of the US midterm elections in November. Hence, the situation currently looks more than likely to get worse before it gets any better.

In Brexit-land, there is never a boring moment. The British pound plummeted on Friday, after UK PM Theresa May delivered some remarks that failed to impress. She maintained a relatively rigid tone on Brexit, suggesting the UK has already made enough compromises and that it is now the EU’s turn to soften its own stance, particularly on the Irish border. Rhetoric aside, and despite the somewhat unfounded optimism around the prospect of a deal recently, the fact is that there is still no viable solution for the Irish border on the table, and that neither side seems ready to back off on this issue. Thus, sterling is likely in for a turbulent ride over the coming weeks, with politics likely to continue overshadowing economics, until – and if – there is greater clarity around the exit terms.

Day ahead: German Ifo surveys due; trade & Brexit headlines to be closely watched

Monday’s calendar is very light in terms of releases, with the Ifo surveys gauging business sentiment in Germany due for release. Elsewhere, trade and Brexit will again be coming to the fore.

Trade developments will be closely watched as China cancelled relevant talks with the US just as the latest round of tariffs and counter-tariffs went into effect. Meanwhile, tensions are spilling over in other directions; China summoned the US ambassador in Beijing and postponed military discussions in the aftermath of sanctions imposed on a Chinese military agency by the US.

In terms of data, the Ifo Institute’s reports on German business morale during September will be made public at 0800 GMT. The business climate, current conditions and expectations indices are all expected to slightly deteriorate relative to August. The survey results have so far been proving sensitive to trade issues; for example, threats on Germany’s auto sector stemming from Trump’s trade rhetoric would weigh on the figures.

Out of the UK, the Confederation of British Industry will be releasing its factory orders balance for July at 1000 GMT. However, any Brexit headlines are yet again likely to drive sterling pairs. On Sunday, Labour Party leader Jeremy Corbyn said he would push for a second Brexit referendum if his party votes in favor of such an outcome; the party will be voting this week to keep a referendum on the table if PM Theresa May proves unsuccessful in passing her plan to leave the EU through parliament.

Canadian wholesale trade data for July are due at 1230 GMT. On the NAFTA front, last week’s talks did not bear fruit, with the next self-imposed deadline to strike a deal being October 1.

Lastly, ECB President Mario Draghi will be addressing the EU Parliament in Brussels at 1300 GMT. 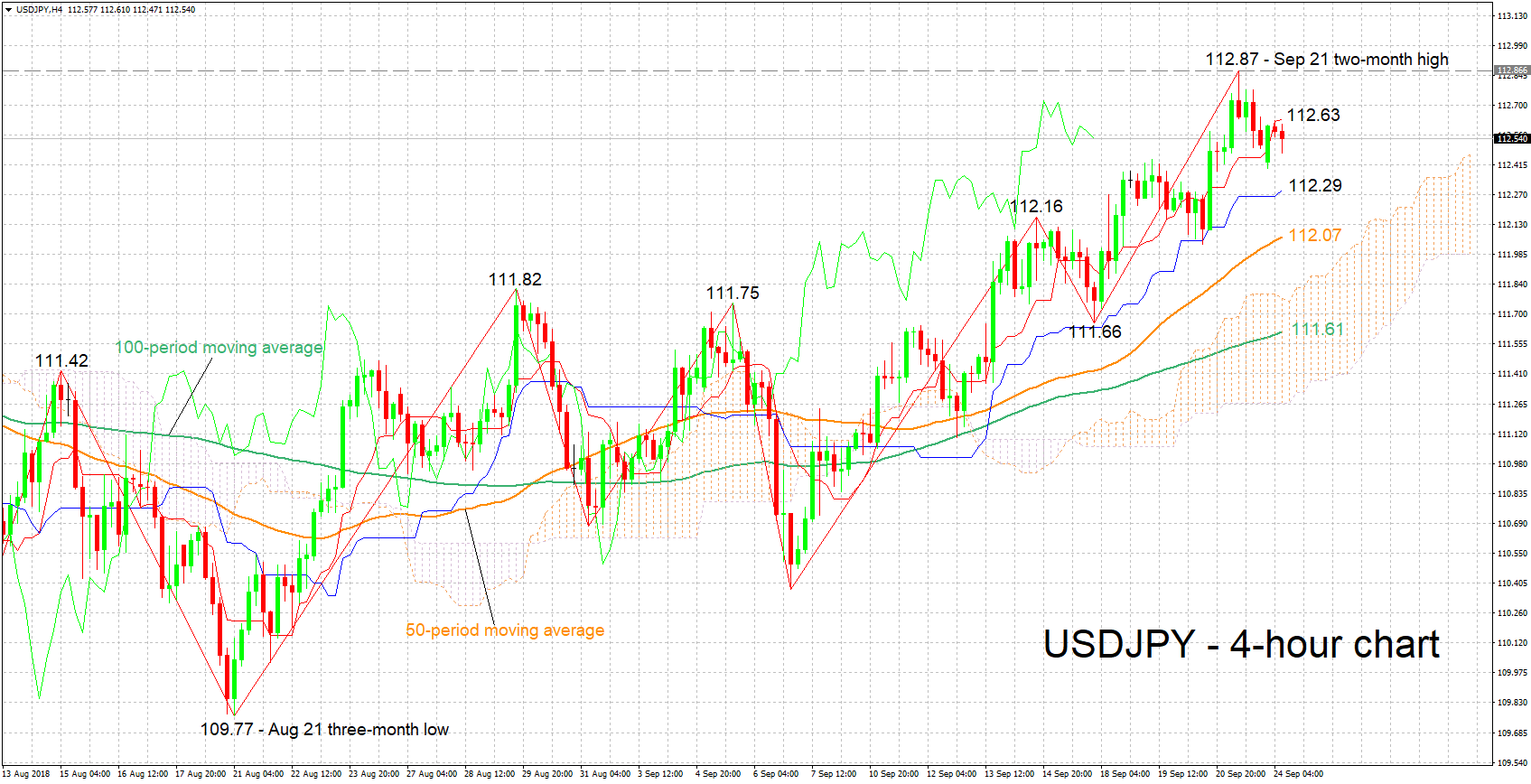 USDJPY has retreated a bit from last week’s two-month high of 112.87, though it continues to trade relatively close to that peak. The Tenkan- and Kijun-sen lines, which remain positively aligned, support that the positive bias in the short-term is still in place.

A significant deterioration in Sino-US trade relations could shift funds to the safe-haven perceived yen. Support to a declining USDJPY may come around the current level of the Kijun-sen at 112.29, with the 50-period moving average line lying not far below at 112.07. Further below, the Ichimoku cloud top (111.76) and the 100-period MA (111.61) would come into focus.

A de-escalation of tensions, on the other hand, may boost the pair. Immediate resistance to gains could occur around the Tenkan-sen at 112.63. In proximity and in case of an upside break is last week’s two-month high of 112.87; the 113 round figure is also part of the region around this point. Stronger bullish movement would increasingly bring into view the 114 handle.